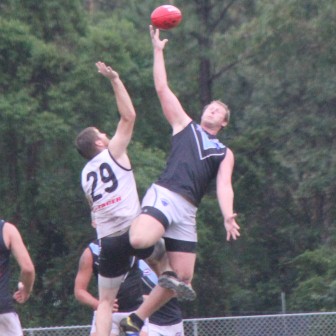 All the action from Division 3 Round 4.

The Buffaloes led by 27 points at the final change, before kicking away in the last quarter to cruise to a comfortable win.

Allan Corrie kicked six for Beenleigh in the win.

Coomera continued their strong start to the season, thrashing Carrara on Saturday.

The Magpies’ win puts them at the top of the division three ladder, with an astronomical 498.92 % record.

The game was Carrara’s first since their round one defeat of Logan, with a round two washout and round three bye.

“We’ve still got room to improve.”

“We probably only played a half. It’s still a positive that even when we are switching off we can still get the win.”

“A lot of confidence but that can go to your head a bit.”

“Three pretty big wins but we don’t want to start to get ahead of ourselves. The ultimate goal is to win the flag but we’re a long way away from that.”

Ipswich picked up a dominant win over Calamvale, on the back of a nine-goal second quarter, on Saturday.

Forward pocket, Adam Gillespie, kicked nine in the win, with four in the second term.

“The team is capable of matching it with other teams, but can’t seem to put it together for four quarters.”

“It’s guys thinking that someone else is going to do the job and forgetting what they did in the first quarter.”

“The brand of football we’re going to play is good enough but the lapses in concentration are costing us dearly. Finished well again but unless we play four quarters we’re not going to be in a position to win games.

“That second quarter, I think it was accurate kicking. We made the most of our chances.”

“Our kicking efficiency was well up. We turned It over a lot the previous week – on Saturday we were able to control the ball a bit better.“

“To their credit, they (Calamvale) were there to play but 2nd quarter just got a way from them.”

Pine Rivers picked up their first Division three win, since being elevated at the start of the season, over Griffith Moorooka on Saturday.

The Swans dominated all day, starting with a five goal to two opening term.

Barry O’Brien led the way in the win, kicking 11 goals for the Swans.