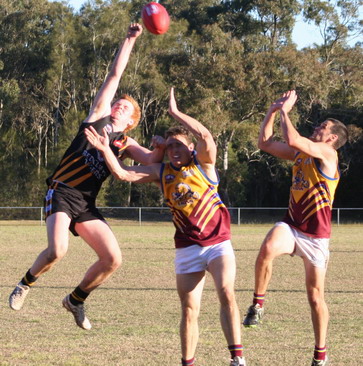 It is finals time for the SEQAFL division three and Beenleigh will face Logan on Saturday at Rob Akers Reserve in the first elimination final.

In the biggest game of the year for Logan last week they rose to the challenge and beat Coomera by 12 points in a remarkable performance.

Although the Cobras had been the competition’s giant killers in the second half of the year, the Magpies were unable to match the relentless pressure and forward line dominance of Logan City.

Gary Smith was deadly up forward for the Magpies and finished with six goals in a best on ground performance.

Needing wins in the last fortnight of football, the Cobras leap frogged Coomera in the last  round to go to fith place to book an encounter with Beenleigh this week.

It is their will to win that will have Beenleigh most concerned, although the Buffaloes are coming off a pretty comfortable win themselves. Last week they toppled Griffith Moorooka by 86 points which included a prominent second half where they booted 21 goals.

Over half the team were able to influence the scoresheet, with Kyle Powe topping that list with seven majors and saved his best for last in an excellent best on ground effort, and Kaine Burridge capped off a fine season with five goals in a very influential game.

The Cobras certainly has the wood on their counterpart from their previous games this year, but as everyone knows, finals football is a different ball game.

Logan showed plenty of heart last week when many wouldn’t have given them a chance, and the result may very well be the same on Saturday.

Caboolture and Redcliffe will be vying for a spot in the second semi final on Saturday at Palmwoods.

The Lions, known for their big wins so far this year, were on the receiving end of an upset loss at the hands of Redcliffe last week. The two goal defeat didn’t influence their standing on the ladder, but it won’t do their confidence a great deal of good going into such an important fixture this week.

Unconverted shots on goal proving to be very costly in what ended up being a close affair. Karl Brockman was the best for Caboolture, while the ever reliable Michael Hood chipped in with four goals and fought hard all day.

Antony Lemar was also impressive with two goals although he may have ended the day with a few more had it not been for the wayward kicking. Redcliffe were clinical straight out of the gate last week, Troy Brown and Aaron Kingdom had a day out with two goals each, while Tim Lynne Ben Strang the young guns of the team performed well in the win.

These two sides are both capable of kicking big scores so the winning team will need to turn in an exceptional defensive performance on the day.

Redcliffe were able to even the ledger in their second battle in round 18, but last week has raised some eyebrows about the Lions chances of progressing very deep into the finals. It is sure to be a big game as there is plenty on the line for both teams.