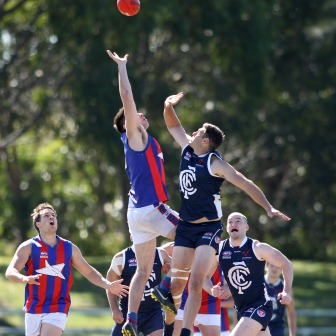 An impressive performance from Alex Hills pushed Yeronga to the limit on Saturday, with the Bombers falling just two goals short of a major upset.

The young Alex Hills held a seven point lead at half time but the Devils finished the better of the two sides to take the points.

Devils fullback Shane McGrath was the best for Yeronga, holding Alex Hills’ danger forward Nathan Burgess to only three goals for the game.

“We played a very experienced side, with the likes of Tim Notting and Shaun Mugavin but it was a great experience for a couple of our younger guys.”

“We are showing improvement each week and I believe a win is not far away.”

“We played pretty well but they just stuck around.”

“We stuck around in their rooms afterwards and they said it was their best game of the year.”

“To hear that and know we’d beaten them, that was real pleasing.”

“Last week, Burgess kicked nine and Shane Mcgrath got the job on him and he kicked three on the day, so that was good.”

Aspley overcame a sluggish start to record a second straight win, over Caboolture.

The Hornets trailed by 35 points at quarter time, but kicked 13 goals to four for the rest of the match to take a comfortable victory at their home ground.

The win could be the start of a purple patch for Aspley, with four of their next five games at Graham Rd.

Robina survived a seven-goal-to-three final term to keep their undefeated streak intact, with a two-point win over Coorparoo.

Korey Fulton continued his good run of form for the Roos, kicking four, while Jeremy Cross was dominant for the ladder leaders as well.

The win keeps Robina a game clear of Yeronga at the top of the table, while Coorparoo sit third.

“We were probably lucky.”

“They had the breeze in the final quarter and it was probably a five -goal breeze and they played a great last quarter.”

“We were definitely looking for a challenge. It came at the right time, coming off a bye and a good win.”

“They’d been beating sides by decent amounts and we knew they were going to be a good side.”

“It was perfect timing and a bit of a wake up call for us.”

Kedron notched up a comfortable victory over Redcliffe on Saturday.

The Tigers started strongly, keeping things level at quarter time, but the Lions put the boot in after the first change with five unanswered goals in the second.

“I think Kedron outplayed us across the park.”

“I just think we weren’t in the right frame of mind.”

“We just went through our motions and…allowed the game to unfold around us.”

“We’re trying to become a stable side firstly in this division and yesterday was a bit of a wake-up call.”

Nambour snapped a four-game losing streak, with a comfortable win over Kenmore on Saturday.

The Sunshine Coast side led for the whole game, and the margin probably would have been bigger if not for some wayward kicking.

The win will be a confidence-booster for Nambour, ahead of their match against Wynnum next weekend.

“We had a fair few opportunities and we’re just making too many unforced errors.”

“It’s not all doom and gloom. Players can rectify these issues pretty quick if they’re prepared to.”

Caloundra inflicted another big loss on Wynnum, keeping their own win-loss
record on an even keel.

The Panthers dominated all day, led by strong performances from Josh Pierpoint (12 goals) and Quinlan Ross.

The Panthers’ 206 was the highest of the season so far, and Wynnum’s sixth straight loss by more than 100 points.

“We needed a win like that to get a bit of confidence.”

“For us it was really just trying to improve tackling and delivery of the ball. Really in some ways, the score was irrelevant.”