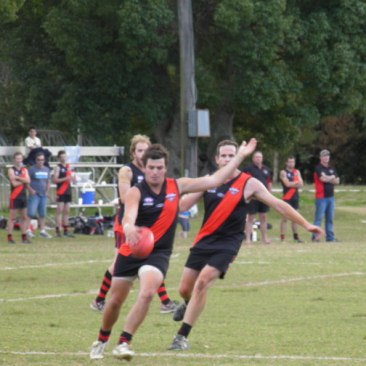 Div 4 North and South finals are on tomorrow.

The Division 4 North finals kick off this weekend, with the top four playing semi finals tomorrow.

Pomona and Bribie Island will face off for a grand final spot in their first semi-final at Pomona tomorrow.

The two have been the standouts of the competition this season, with Pomona finishing two games clear of Bribie, with another two games between them and Maroochydore.

Bribie took their first clash in round four, by 46 points, but Pomona has since hit its straps, winning their matches in round nine and 14 on their run to the minor premiership.

Pomona has an imposing record at its home ground too, having gone through undefeated at the venue over the season.

Their final will kick off at 2:30pm at Pomona tomorrow, with the winner nabbing a week off and a grand final berth, while the loser faces one of Maroochydore or Noosa in week two of the finals.

The two Sunny Coast rivals will play in a massive match at Pomona tomorrow, for local bragging rights and to keep their season alive.

The Roos finished four games ahead of Noosa in the regular rounds and will be fairly confident going into the match, but once finals start, anything can happen.

In both of their clashes this season, Maroochydore has taken the honours by 28 and 55 points, in rounds two and five, respectively.

Noosa will go in as rank underdogs, but Maroochydore will certainly be wary of a local rival desperate to claim a win when it counts most.

Noosa and Maroochydore’s elimination final kicks off at 12:00pm tomorrow at Pomona, with the winner to meet the loser of the second semi in a preliminary final on August 17.

Ballina goes into the match with plenty of confidence, after a 39-point win over Bond Uni in their semi final last weekend.

The Bombers will go in as relative underdogs in the match, but a round 11 victory over the Tigers, shows they have the potential to best Tweed Coast.

Tweed has beaten them at every match away from Ballina’s home base, and with this game being played at Byron, they will not be intimidated by the venue one bit.

The northern rivers side pushed minor premiers Byron Bay in their first final last weekend, but were eventually beaten by 40 points.

They will be looking to rebound from that disappointing effort against the Bombers tomorrow, ironically at the Magpies’ home ground.

The preliminary final kicks off at 2:00pm at Schultz Oval, with the winner to meet Byron Bay in the August 17 title decider.