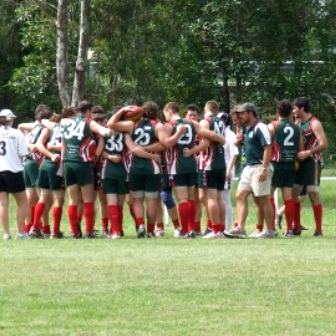 2012 grand finalists, Logan City, take on Div 3 debutants, Carrara, in our featured match for the opening round of community footy.

Div 3 action kicks off on Saturday, and the intriguing clash between Logan City Cobras and Carrara Saints is the first featured match of the round.

Coming up against Div 3 debutants in the Saints, Cobras coach Matthew Skidmore is keen for the 2012 grand finalists to put their stamp on the competition early.

The elevation of Nambour, Redcliffe and Caboolture to division two puts the spotlight squarely on the Cobras this season and Skidman said it was important to get out to a strong start against Carrara.

“With those clubs gone, it does put pressure on us to perform,” he said.

Despite heading into the season as one of the premiership favourites, Skidmore said there was always unknown quantities through the competition.

“We’ve got to see every side. Every side’s different every year,” he said.

Skidmore said the January floods had disrupted their pre-season somewhat; the club had bounced back ready for the opening clash against the Saints.

Saints senior coach Teddy Fenton said Carrara would be ready and gunning for a win against the Cobras in their Division three debut tomorrow.

“We definitely want the win,” he said.

“We have a lot of boys aged between 17-20 who have probably played 16s and one year of 18s football. It’ll be a great challenge for those boys.”

The Saints have implemented a stricter structure this season in preparation for the move to Div 3, which Fenton said was a new experience for a lot of the players.

“A lot of the guys have never played to a structure before,” he said.

“I’ll just be looking for the guys to be disciplined through the match and play in our structure.”

Fenton, also in his senior coaching debut, said he was “excited and nervous” for his first match, after coaching reserves in the past.

The Cobras and the Saints face off at Tansey Park tomorrow at 2pm.