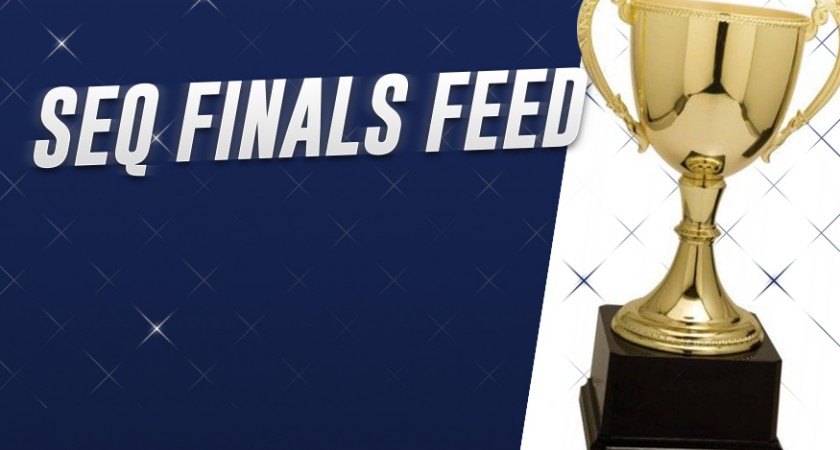 Twelve months after the last chapter was written between these two clubs, we are back again.

If you look at 2016 as a whole, Maroochydore have been the pace setters, and are more than deserving of playing in the final game of the year.

Mayne got off to a slow a start in 2016, but their quest to go back-to-back-to-back ramped up in the last month of the home and away season.

As they say, premierships aren’t won in May.

These two teams squared off in a semi-final just two weeks ago.

On that day, Mayne sent a message to the rest of the competition with a dominant performance around the footy, beating the Roos by 45-points.

That meant Maroochydore had to knock of Caloundra last Saturday to book their ticket to the big dance.

The loss might not have been the worst thing to happen to the Roos; it showed them the level they need to be at to beat the Tigers in full flight, and could have been the wake up call they needed.

Having said that, the win must have done wonders for the Tigers’ confidence levels; it was some of the best footy they have played all year.

The quicker this is, the more it suits Maroochydore. Mayne are no slouches on the outside, but Maroochydore has put teams to the sword out there this year.

Mayne will go back to their bread and butter; win the stoppages, get it in long, and kick a big score.

Luke Faulkner, the leading goal kicker for the league this year, can’t be allowed to hit up at the footy. If you give him 20 metres of space to work in, he will not only take it, but also put multiples straight over the goal umpires hat.

Then there is Paul Bevan for Maroochydore, who is going to be a real headache for Danny Craven and the Mayne crew. Do you put a big body on him, or play a defensive midfielder? Time will tell…

For the coaches, Craven is looking to cap his first year with Mayne off in perfect fashion, while Brett Maloney is hoping to reverse last years result, and bring the flag back to Fishermans Road.

This title fight could go the distance.

These two teams are the perfect example of peaking at the right time.

Three weeks ago, it looked near enough certain that only one of them would make it to the Grand Final.

Now, after both beating the previously undefeated Maroochydore in consecutive weeks, they are one win away from lifting the premiership cup.

When it is more open and high scoring, Noosa have got on top, but if the game is a bit more scrappy, and goals more hard to come by, Mayne has come away with the win.

That will be the blueprint for this one as well.

If Noosa can get it on the outside and spread the numbers from around the footy, they should run away with this; but if it is stoppage central or played in traffic, Mayne should be too big and too strong.

The other positive Mayne can utalise is their experience in big games.

Like the seniors, they are shooting for their third consecutive premiership.

Can they do it, or will Noosa spoil what could be a day of double delight for the Mayne Football Club?

We will soon find out.

The Colt Division 1 flag is more than up for grabs.

Two weeks ago, Maroochydore were too classy for Southport, winning their qualifying final by 40 points.

But I think Southport’s win over the previously undefeated Mt Gravatt last week will do wonders for their confidence levels.

It showed them that if they play their best footy, work as one unit, and get the game nice and open late in the piece, they could beat anyone.

It’s going to take another performance at that level to knock off the Roos though.

They have been formidable all year, with their only slip up a four-point loss to Caloundra in round 14.

They have been building towards this for a few months now.

Both teams are going to try and score heavily in this. Their transition football has been their strength all year.

Both are more than capable of kicking over 100, so the focus needs to be on their defensive work.

If one side can limit the opposition to 10 goals or less, that would pretty much win them the game.

The Roos have had a really healthy spread of goal kickers all year, Bayden Goff has the most with 31, so Southport’s back six have really got to work in harmony. If they put all their time into one, another will get off the chain.

For Southport, after Valentino Beynon went down, Hayden Correa stepped up to the plate.

60 goals in 19 games is a good return for this level, so he needs a bit of time put into him.

Maroochydore will be hard to beat, but Southport should come home with a wet sail.

There is a real unknown about this one, and it’s why we love finals football.

When these two sides run out, it will be the first time they have seen each other in 2016.

There hasn’t been much separating these two in the key indicators all year though.

The Lions have done exactly what they needed to do this finals series.

They took care of Burleigh two weeks ago to book a direct ticket to the Grand Final, having the luxury of kicking the feet up last week and resting the bodies.

They are going to be fresh.

Noosa couldn’t have been any more impressive last week.

They were in unstoppable form against Burleigh, winning by over 100-points.

Fowles was the star, with eight goals, but his last three weeks tells the real story.

He has booted bags of five, six and eight, to become the most in-form big man in the competition right now.

If he is given any room to move in the forward 50, he has the ability to put the Lions to the sword.

Up the other end though, Daniel Stubbs can turn a game on its head very quickly, and Jake Barlow is a very good user of the football. If either or those two can get a stranglehold of this game, the Lions are in safe hands.

They both play a similar brand of footy, so it’s going to be more about the way they use the footy than the tactics of the game.

Making the most of your opportunities in front of goal could be the difference.

The wyle old heads against the new kids on the block, and it could go either way.

It’s one all in the head-to-head this year, with Bond taking out the most recent encounter.

Last week, Springwood couldn’t claw over the line against Coorparoo, while Bond held on in a thriller with Yeronga.

The key to this week will be the tempo. Both are going to score heavily, but it will be about how they do it. The more open and chaotic, it is, the more it will suit Bond. They are fitter down the stretch.

But if Springwood can turn it into a marking contest with possession footy, they should book a grand final spot.

Three games against each other in four weeks; that’s unheard of.

Unfortunately, the script looks pretty glim for the Pirates, who have been well taken care of the previous two outings.
They haven’t been able to win the midfield battle, or stop the scoring power of the Lions, which will be a big task again this week.

Park Ridge will take a bit from their win over Pine Rivers last week, which was reasonably comfortable. They need to bring that confidence from the opening bounce tomorrow.

If they don’t, and Kedron get their spread going, it could be over pretty early.

Hard to get a read on this one.

If you look at the season as a whole, Jindalee win. They have been in the top two teams pretty much all year, and are playing some good footy.

But, the only time these two teams have played this year was round 5, where Yeronga won by 39-points. They dominated all over the ground that day.

Jindalee have been playing better footy since then, but Yeronga had a big time win over Coolangatta last week, a game that was a genuine toss of the coin.

First quarter is going to be crucial. If either side can open up a two or three goal advantage, they are going to be hard to catch.