SANDGATE ON A ROLL 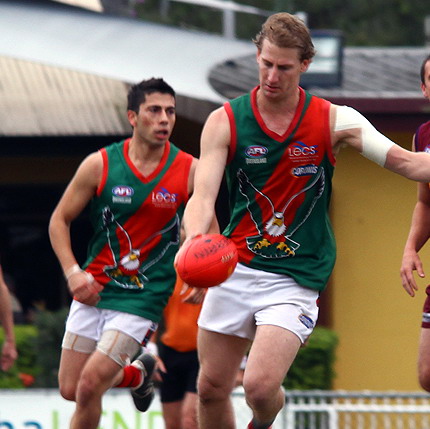 SANDGATE kept up the pace as ladder leaders with victory over Wilston-Grange in the north Brisbane derby on Saturday.
The Hawks, whose only loss of the season was at the hands of the Gorillas in round one, scored by 12 points after coming from well behind at half-time.
The biggest talking point of round 10, though, came from the Gold Coast where Palm Beach-Currumbin put the cleaners through 2010 champions Noosa.
PBC scored by a convincing 33 points and sounded a clear message that, with a favourable draw ahead, they are genuine top-three contenders.
At Bill Godfrey Oval, Mayne’s on-permit full-forward Cleve Hughes kicked 11 goals but the Tigers still manage to lose by a whopping 75 points after a shocking second half.
Elsewhere, Surfers Paradise had to come from behind to beat Springwood at Sir Bruce Small Park and the Western Magpies had too much run in the end for Maroochy-Northshore at Chelmer.

Sandgate the kings of Northern Brisbane
By Terry Wilson

SANDGATE regained their unofficial title of kings of north Brisbane when they downed Wilston-Grange in a tight derby at Lemke Road Oval on Saturday.
Reversing the result from round one – which was Sandgate’s only loss of the season thus far – the Hawks took the clash by 14.7 (91) to 11.13 (79).
But the Hawks finished with a truckload of injury concerns heading into next weekend’s big road trip to Noosa for the 2010 grand final rematch.
During Saturday’s game, the Hawks lost Ben Drew (hamstring), Will Bradley (shoulder), Damien Garton (knee) and Josh Walker (corked buttock) after going in without veteran Danny Dickfos (hamstring)..
All but Walker could be out for three to four weeks, maybe even longer.
But that is in the future and captain-coach Ben Long was reasonably satisfied about his side’s performance against the Gorillas.
Especially after the visitors put on o 32-point lead by half-time when they looked all over winners.
“They played some really good footy,” said Long of the Gorillas. “Their attack on the ball was better and they didn’t allow us to play our style.
The Grange led 5.2 to 1.1 at quarter-time and by 9.4 to 4.2 at half-time. At that stage the Hawks were flightless.
“I was worried by the way the game was going,” said Long> “I thought we were a bit flat after a big game the previous week – and we were having a bad day with injuries.”
But the switch of 2010 best and fairest Aaron Fabian from centre  half-back to the middle and up forward proved a winner and the Hawks started to get their hands on the football.
“One of our strengths is to find ways to win when we’re not playing well.
“We started to win some contested football, we kicked a couple of goals and got some momentum back our way.”
Rival coach David Martin, outfoxed this time by the player he used to coach at the Northern Eagles, found it hard to explain what happened to the Gorillas after the long break.
“They got up and going, I suppose,” he said of Sandgate.
“I’m not sure if we thought the job was done or the breeze would do it for us, but we made some terrible mistakes – I don’t think we won a clearance in the second half.”
Martin also thought the face he did not train his players in the week before the last round bye may have had something to do with the fade-out.
It was a deliberate plan to freshen up his players at the half-way mark of the season.
“It gets a bit humdrum at this time of the year so I decided to break the season up
“I still think it will be a worthwhile exercise getting into the business end of the season and I suppose it’s good to get your backside kicked at this stage.”
For Sandgate, Fabian was superb, as was centreman Matt Nuss and ever-rising Shayne Etherton at centre half-back, yet another key position the big bloke has filled admirably.
And former Sandgate junior Liam Rutledge also won praise from both coaches.
Playing on permit from NEAFL club Aspley, Rutledge shone like a beacon after half-time and, in the fourth quarter, kicked three huge goals after some superbly-timed marks.
Wilston-Grange were well served by middleman Elliot Hohenhaus, half-back Lee Smith, Tim Nicholson at full-forward and former player-coach Michael Rogers on a half-forward flank.