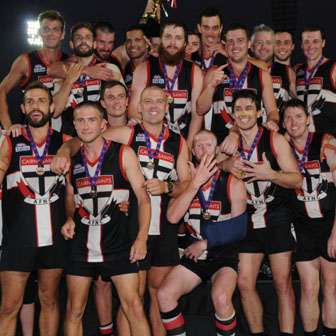 Saints added another premiership to their remarkable record on Saturday afternoon at Cazalys in a win that will not be forgotten for a long time.

Four players were taken to hospital and a further four played on with injuries as Saints beat Norths 17.7 (109) to 11.19 (85) to claim their 11th AFL Cairns premiership since joining the league in 1993.

They played the entire fourth quarter without a man on the bench after Brenton Powell was knocked out late in the third term and Jarrod Searle (knee), Craig Ferrier (ribs, sternum) and Adam Couch (collerbone) had already been taken from the field.

“It’s one of the best things ever,” Saints captain Jesse Dixon said.

“To have four boys down and no one on the bench for a half was a great effort and something I’ll never forget and cherish forever.”

Norths started the better side and had Saints on their knees when the second half began.

But they kicked poorly and then lost their cool, ill-discipline allowing Saints to storm back in front and then hang on with tired legs in the final term.

The breeze at their backs, Knott’s men dominaetd the opening term to lead by four goals at the break.

Returning from injury, Tom Clough snapped the first goal of the game and added a second as the Tigers’ clinical kicking game carved up the defending champions.

Ferrier was then hammered mid-air and the Tigers had all the momentum.

Macqueen wrestled a bit of that back though, running on to a loose ball down the right wing and squeezing through his first for the game to open the second quarter.

The pint-sized pilot was in the action soon after, sliding into the contest to pluck possession before delivering into the forward 50m where Searle kicked his second.

Things evened out for the remainder of the half and it looked like Norths had Saints measure.

They started faster in the third too, but could not find the big sticks despite having all the chances.

No goals were scored in the first 10 minutes of the third but slowly Saints gained control of the contest and North’s temper worsened.

They hit the post twice before finally kicking the breakthrough goal and no sooner had Saints hit the lead.

Walsh kicked two in that quarter before Powell was felled in the centre square and play was halted for more than 30 minutes waiting for an ambulance to return.

With nothing left on the bench, it was Zac Kelly who stepped up for Saints in the final term, marking well and goaling to send them on their way.

Another major to Knott kept things interesting, but when Walsh finished from 40m after a breakaway it put them out of reach.

Macqueen popped up again to push the lead to 20 and triggered a rendition of When The Saints Go Marching In in the stands.

Speaking on the presentation dais after the loss, Norths captain-coach Kane Richter said he was proud of how far his team had come and he also lauded Saints’ ability to perform on the big stage.

“I’m proud of every one of you….we’ll be back next year to hopefully go one better,” Richter said.

While no umpire reports were issued following the game, Cairns AFL officials will monitor video of the grand final during the week.