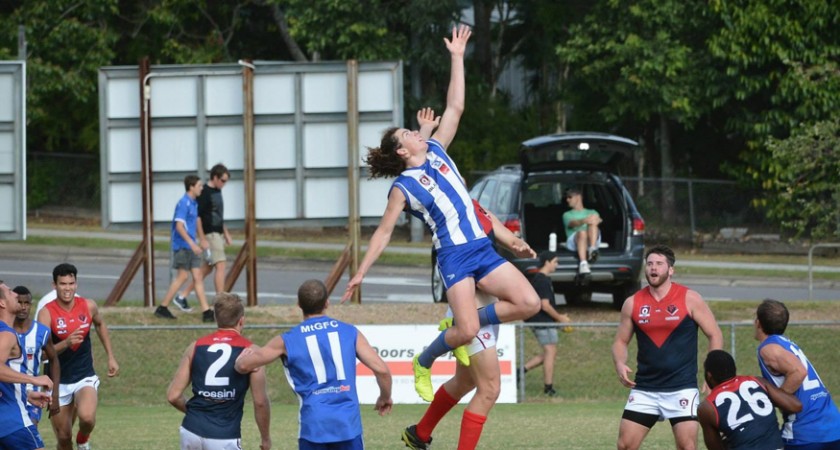 All the attributes are there for Wylie Buzza. He’s big, he’s strong, he’s athletic, and he has good hands.

On Saturday, it all came together for ‘Buzz.’ After a best on ground performance, he has earned the round 6 QAFL Rising Star nod.

Playing mostly in the ruck, he imposed himself on the contest all day, throwing his weight around in the middle, but then getting on his bike and clunking a few important marks around the ground.

“It was the first time all year that I put in a good four quarter performance, I’m constantly getting hammered about my marking so it was good to finally take a few grabs,” he said.

“Hopefully now it gives me a bit more confidence going into the Queensland game this weekend, and I’m able to grab a few marks and continue to impose myself in the higher levels.”

It’s been a difficult start to the year for the Vultures, notching up just the one win so far in 2015, but Buzza believes they have the cattle to turn it around.

“The skills are their, there are a lot of good players, so it’s only a matter of time when we start working together a bit more,” Buzza said.

“The team spirit is there; we have just got to bring it on the field. They definitely have the team to play deep finals football.”

His immediate attention turns to Queensland’s TAC Cup game against Oakleigh this Saturday at Redland, before looking ahead to the NAB AFL Under 18 Championships next month.

“Definitely excited for the weekend, it’s always good to play for Queensland, it’s a great honour,” he said.

“As a team I think, I really think we can take out the division two title.

“Personally, I’m feeling good, the body is pretty much 100 per cent, there’s nothing holding me back, I just need to make sure I know what I can do well and make sure the recruiters see it too.”

Wylie’s next game will be this Saturday for the Queensland Under 18 State Academy in their third TAC Cup game against the Oakleigh Chargers, kicking off at 10.30am.