Round 6 QAFL Preview and Teams 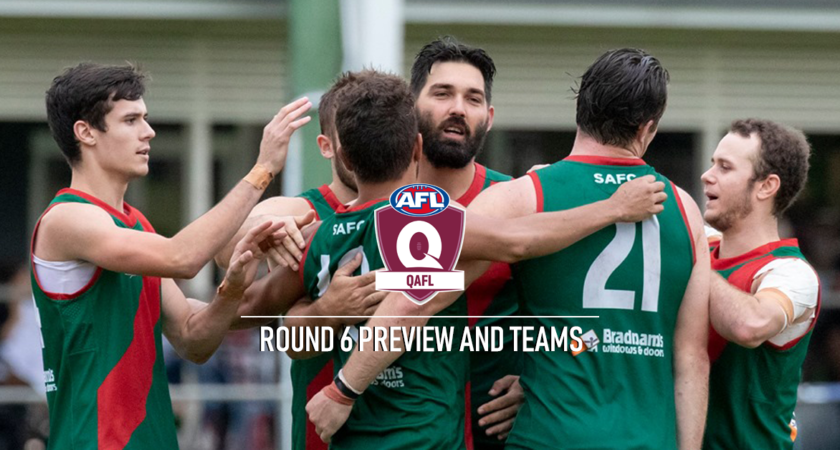 Jess Sinclair is only new to the QAFL scene as new coach of premiers Palm Beach Currumbin.

But he has already seen enough to know that the Surfers Paradise Demons are the real deal heading into a huge Gold Coast derby at Salk Oval on Saturday (1.30pm first bounce).

“I watched them against Broadbeach last week and their hardness and the way they hunt the footy were two things that stood out to me,” he said.

“It’s going to be a massive game and I reckon they’ll fancy themselves coming here.

“Look what they did to Labrador a few weeks ago – they have some class and quality players there.”

The Currumbin Creekside derby features the competition’s only unbeaten sides and is expected to draw a big crowd.

It is fact that Surfers broke a drought of some three decades when they beat PBC at Salk Oval last season and that result goes in favour of the Demons.

Yet coach Brad Moore made a relevant point when that match was brought up.
“That was last year, it was good for us then but they went on and won the premiership,” said Moore.

“Our side a lot different this time but we’ll take confidence going down there.”
Moore said the Demons are off to their best start for many years. It was not so long ago that the Dees won only four games for the season. Now they have that number already in 2019.

“Last year it took us seven weeks to get to four wins so all steps are going in the right direction.

“This one will be a massive challenge because they’re in great form and what they did to Morningside last week was impressive.

“I reckon Palm Beach are the benchmark because, on paper, they look even stronger than last year.”

PBC, chasing an unprecedented hat-trick of premiership flags, have three changes to their side, welcoming back premiership pair Jackson Emblem and Adam McKenzie at the back and promoting Suns academy member Ashton Crossley, who tasted seniors football with the Lions last year.

They are in for Trent Stubbs (Southport NEAFL) and the unlucky omissions John Macansh and Jack Marino.

Surfers have four forced changes from the side that downed Broadbeach last weekend.

The Dees lose Noa Corbett, Noa Corbett, Josh Matulis and Trent Goldfinch through injuries and defender Sam Jewell has been called up by Southport.

The bonus is that triple best and fairest winner Cassidy Haberfield is right after his muay thai engagements were completed and Jack Taylor, Elliott Bath and new face Zane Baker, from Coomera, is in for his first game. 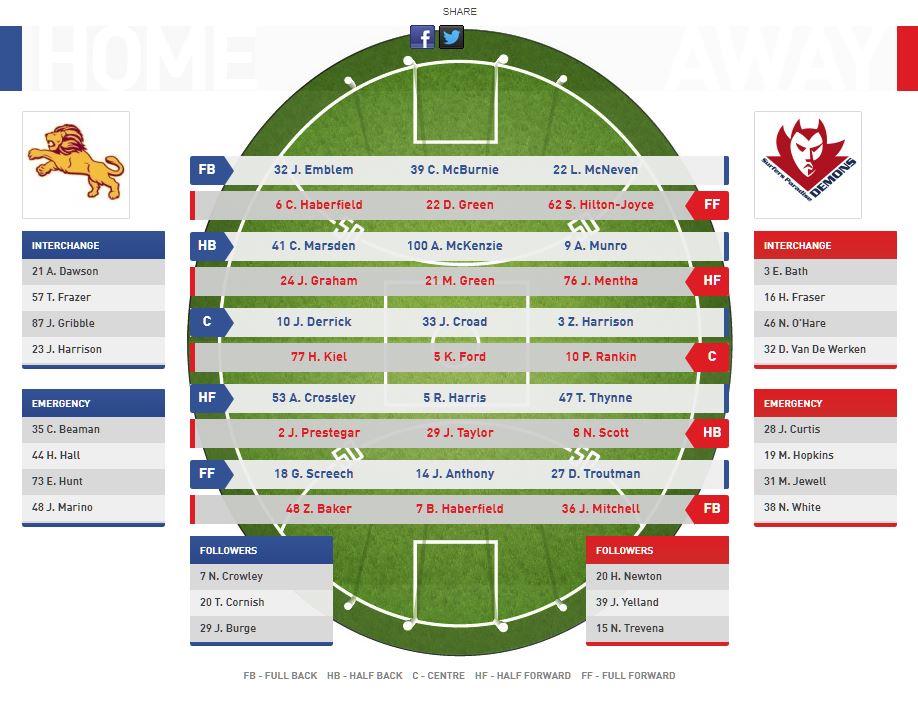 It has been a long, long time since Labrador have been able to go into successive matches without a change in playing personnel.

That fact, plus coming off the back of an impressive victory last weekend when they beat Mt Gravatt, has fired the Tigers up for the second of two big Gold Coast derbys on Saturday when they take on Broadbeach at Cooke-Murphy Oval.

And the good news for the Tigers, who are coming off a terrible, injury-riddled 2018 campaign, is that their side can get only stronger and stronger when some key performers return.

Billy Hicks, Jake Goldsmith, Rhys Coombe and Dylan MacCombie are all well on the road to full fitness, according to coach Liam Burke.

“They’re starting to ramp up their training loads after injuries,” said Burke.

“We’ve been pretty used to having four or five changes each week so it’s good to get some continuity for a change.”

It was contrasting fortunes for Labrador and Broadbeach last round.

The Tigers were good in their win over Mt Gravatt while Broadbeach were their own worst enemies as they performer football hari-kari in an error-laden loss to Surfers Paradise.

Yet Burke concedes the Cats have been in better form than his Tigers so far this year.

“What did that win last week do? I think it’s just confidence and belief that our best is good,” he said.

“I think Broady have been in better form than both ourselves and Mt Gravatt but the win gave us confidence that when we apply ourselves we can string good footy together.”

In the Cattery match committee sitting this week the wise heads came up with three changes, perhaps four, depending on a fitness test to ruckman Matt Conroy.

Southport pair Jack O’Shea and rookie Harry Arnold join regular Darcy Dienjes in the firsts while Conroy will come into the side if he passes his test. He would go in for Alex Aurrichio.

Coach Beau Zorko is demanding a turnaround in performance from the Cats this weekend.

“The 22 to play this week need to perform because we need to get back after what I thought was pretty average performance last week,” he said.

“We seem to be very good at butchering the football at the moment and we need to tidy that up.”

Loyal Mt Gravatt stalwart Chris Murphy is set to open floodgate of personal milestones when he lines up in a Brisbane derby against Wilston Grange on Saturday.

A 26-year-old solicitor, Murphy is coming up for his 100th seniors appearance for the Vultures – a journey that seems to have taken an eternity given he started at Dittmar Park as a six-year-old.

Murphy is one of five Vultures who are due to reach the 100-game milestone this year – and there are four or five more who could achieve the same target next year.

Had it not been for a frustrating run of injuries a few years ago Murphy would have been well past the hundred-games mark.

“I debuted as a 16-year-old but I was injured a lot when I was younger,” he said.

“But the past five or so years have been good and to play 100 games at my club is awesome.”

Mt Gravatt coach Adam Boon described Murphy, a vice-captain, as ‘a massive part of the club’.

“He has been a huge influence around here.”

Murphy feels there is vast improvement in the Vultures and described last weekend’s hiding at Labrador as hugely disappointing.

“We’re far from our best at the moment but we’re finally getting a few guys back from Injuries.”

That influx of god players back in action meant eight changes to take on the Gorillas.

Among those named on the list of ‘ins’ are captain and ruckman Andrew Smith, Redland NEAFL pair Harrison Hunkin and Aaron Christensen and former Broadbeach utility Robert Blood, who is set for his first appearance for the Vultures after hamstring issues.

As for Wilston Grange, you could be excused for wondering if they had disappeared from the competition.

The last time the Gorillas went around was on Anzac Day eve, leaving them a break of almost three weeks.

Will this lengthy break have any effect on the Gorillas?

“What we have done is everything we could do to make sure we are right.

We’ve put in the hard work and done a lot of match simulation to make sure we play the style that we’ve been playing.”

The Gorillas have fared well over their extended break and regain best and fairest Adam Hughes and get Daniel Henderson from Aspley in the NEAFL.

Who will ever forget last season in the corresponding match when Sandgate produced the upset of the season by beating Morningside, and at Morningside?

As things turned out it was the only win of the season for the battling Hawks but a result not forgotten by the rival camps.

The Panthers most certainly are prepared to avoid a Mother’s Day massacre at Jack Esplen Oval on Sunday and are determined to prove last weekend’s hiding from Palm Beach Currumbin was merely a glitch on the radar.

Coach Clint Watts said coaches and players have spent plenty of time watching video of the Salk Oval lesson and been ‘tidying up a few areas’ on the training track.

“We watched the tape and we believe we did a lot of things right,” Watts said of the previous weekend.

“We’re after a response from our players and we’re asking for them to improve on those areas that let us down against Palm Beach.”

“Sandgate did kick 80 points against Palm Beach this year and they nearly beat the Magpies,” he said.

“I feel their ladder position doesn’t go hand in hand with the talent they have there.”

At selection time the Panthers made three changes, bringing in Ryan Dadds from Redland and Luke Rogerson for the unavailable Lachlan Dignan and Nathan Colenso, who is back in the reserves.

Sandgate have made four changes, including the return of 16-year-old small forward Lochlan Harrop after Lions Academy duties.

“It’d be nice to get another win,” said Sandgate coach Jarad Marsh.

“If we play the way we know we can play then we’re a massive chance.”

Last time out the Hawks put it right to Western Magpies and led clearly before heavy rain halted their progress.