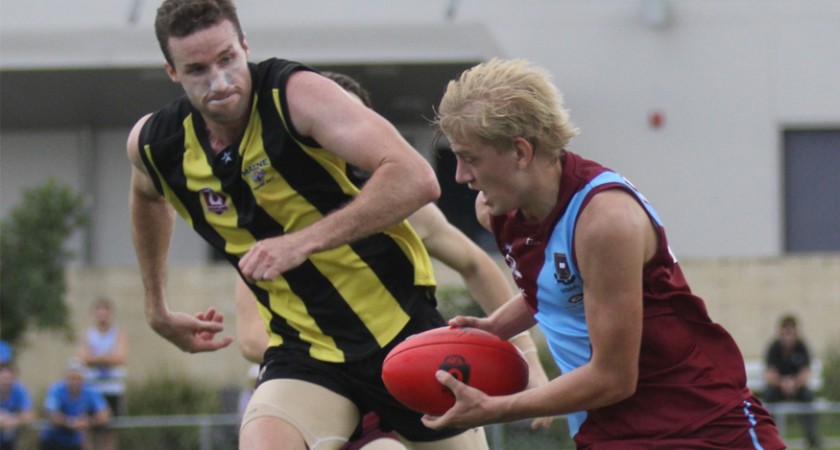 The wide-open expanses of Lemke Road suited Luca Mason’s game to a tee on the weekend.

The pacey outside runner got a heap of the footy for UQ against Sandgate, earning him the round 5 Rising Star nomination.

Playing out on the wing, Mason found space where most couldn’t.

He cleared the congestion, got the ball moving in UQ’s direction, and hit targets in tricky conditions.

“I thought it was pretty solid. I made a few mistakes, but I got a fair bit of the ball so I thought I did alright in that part,” Mason said.

“It’s a real big field, I had a massive paddock to run into, and managed to get onto the end of a couple.”

At just 17 years old, Mason opted to skip his final junior year of football in 2015 to have a crack at senior footy.

“I was looking for a club because I didn’t want to play under 17’s this year,” he said.

“Scott Borlace from the Lions Academy recommended UQ because he knew Darren Pfeiffer, so I went down there and it was awesome, I loved it.

“The training has been hard, but I feel like I’m really improving.”

His role in the Red Lions’ senior team might be slightly different to what he is used to, but his awareness and decision-making skills have seen him slot into the position with ease.

“Now that I’m playing on the wing, it’s all about learning where to be on the field,” Mason said.

“I was more of a midfielder (in juniors), so now it’s all about learning when to get out and around.”

Looking ahead, Mason thinks the consistency UQ are lacking at the moment will come as the group gels.

“Obviously we are a young team still learning the new structures and everything, but I think we are going to start bringing it together and start being more consistent over the course of the year,” he said.