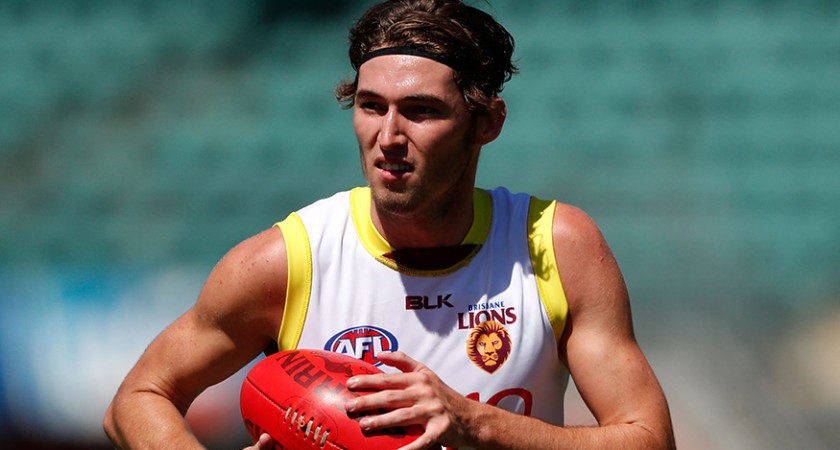 For about two minutes last November Jacob Allison was a St.Kilda player.

He was nominated by the Saints with selection #55 in the NAB AFL Draft, and had the Brisbane Lions not chosen to match the bid under new draft regulations then the 193cm Queensland utility would now be in red, black and white.

But having invested five years in the Aspley junior the Lions weren’t about to let him slip away.

So, having passed up an opportunity to match North Melbourne’s bid at #34 for Aspley clubmate Declan Watson, they pounced on the then 18-year-old, who had moved to Queensland from Geelong aged six and joined the Lions Academy at 13.

It was a move that kept Allison at home, and is set to reap its first tangible return on Sunday.

Allison is in line to make his AFL debut against the West Coast Eagles in Perth after being named in a 25-man Lions squad on Thursday night.

He was included on an extended interchange bench and is tipped to survive the final selection cut.

So, too, is highly-rated key defender Sam Skinner, who was named to debut last year after a 2015 knee reconstruction only to suffer another serious knee injury at the final training.

Fellow Queenslander Claye Beams also was added to the squad as the coaching staff, concerned by the demands of a long, hard season on young players, opted to rest Eric Hipwood and first-year pair Hugh McCluggage and Jarrod Berry.

Dayne Zorko will also miss the trip west through suspension.

If he plays Allison will be the sixth Queensland debutant of the season behind Gold Coast’s Jack Bowes and Brad Scheer, North Melbourne’s Braydon Preuss and Josh Williams, and Geelong’s Wylie Buzza.

It will be the culmination of a slightly bumpy ride to the elite level for the life-long Hawthorn fan, who loomed as a likely top 10 pick in the 2016 Draft after he was one of five bottom-age players chosen in the 2015 All-Australian U18 side.

It was no surprise, then, that Ainsworth, Petrevski-Seton, Berry and Parfitt went at 4-6-17-27 in the 2016 AFL National Draft to Gold Coast, Carlton, Brisbane and Geelong respectively.

Nor that Ainsworth, Petrevski-Seton and Parfitt made their AFL debut in Round 1 of the 2018 Toyota AFL premiership, and that Berry followed in Round 3.

Allison has been the odd one out. He had to wait until the second pick in the fourth round of the draft to secure his spot in the AFL. And has had to wait until Round 19 this year to perhaps get his chance at the elite level.

It doesn’t matter in the long run, but for observers of a player who had pretty much been top of his football class through the junior ranks it was a bit of a surprise.

And where might he play if he plays? That’s anyone’s guess.

As Allison explain countless times when asked by club recruiters during pre-draft interviews he doesn’t really know where he is best suited.

“I love playing as an inside midfielder, I love the wing, and if I get chucked onto a half-forward or half-back flank I really enjoy that too. To put it down to one position is really hard for me.”

He has been used in a variety of roles in the Lions NEAFL side this season – half back, wing, high half forward – and his size, athleticism and versatility will make him a valuable utility player as his AFL career unfolds.

He has averaged 19.9 possessions and kicked six goals in 13 games in a NEAFL side that sits second on the ladder with a 12-2 win/loss record, and has been named among his team’s best three times.

If he plays he will follow the likes of Jono Freeman, Liam Dawson, Hipwood, Ben Keays and Matt Hammelmann as graduates of the Lions Academy to play with the club in the AFL.

And he will be the fifth player to make his AFL debut for the Lions this year behind, Berry, Hugh McCluggage, Alex Witherden and Cedric Cox. Skinner would be a sixth.

The unlucky Claye Beams, who has had a shocking run with injury, is in line for his first AFL game in 10 weeks after playing six in a row to Round 9.

Allison’s pending debut is the highlight of a good week at the selection table for Queenslanders.

Ruckman Preuss, so impressive in the first four rounds of the season, will return to the North side against Melbourne in Hobart on Saturday afternoon after a couple of weeks out with a bad back.

Buzza, who debuted on 15 minutes’ notice for Geelong in Round 15 and held his place in Round 16, was recalled for the Cats’ game against Carlton at Etihad Stadium on Saturday night.

And Jesse Joyce, who played the first 13 games of the season for Gold Coast, will return against Richmond at Metricon Stadium on Saturday night.

First-year rookie defender Max Spencer was named as a Suns emergency for the first time as Bowes was omitted by coach Rodney Eade.

In other Queensland selection news, Aliir Aliir is a Sydney Swans emergency for the Friday night blockbuster against Hawthorn at the MCG, Tom Hickey is a St.Kilda emergency for the Adelaide Oval clash with Port Adelaide, and Josh Wagner is a Melbourne emergency against North.

Josh Williams, who made an impressive late inclusion debut for North last week, was dropped, and Fremantle veteran Lee Spurr will miss his team’s clash with the GWS Giants in Sydney on Saturday afternoon.

Young Queenslander Declan Watson suffered a shattering end to his first season in the AFL when he blew out his knee at training on Thursday.

The North Melbourne defender, a Brisbane Lions Academy graduate overlooked by the club in the 2016 National Draft and taken by the Kangaroos at selection #34, will miss 12 months’ football.

The 18-year-old Aspley product fell awkwardly on his left knee and was quickly attended to by medical staff.

A North statement said the 194cm backman had his best game in the VFL for Werribee last weekend following a long absence with ankle and shin problems.

Watson has played only seven games of football for the season – four in the VFL development League and three in the VFL.