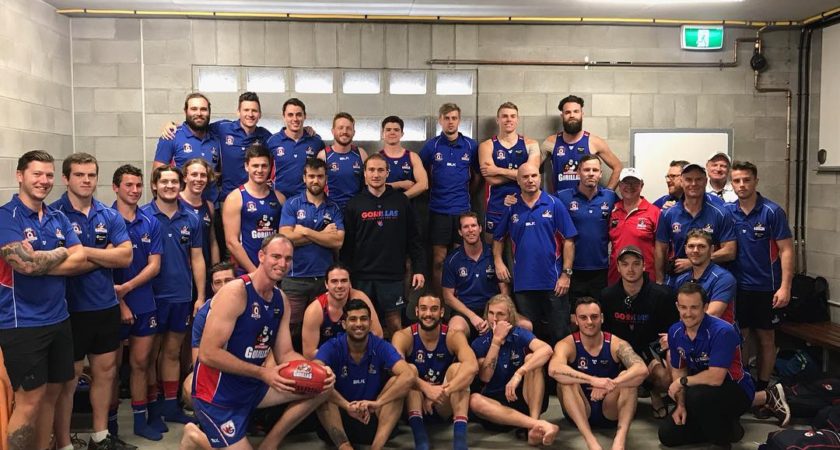 THE Western Magpies have given themselves a shot at grabbing the finals double chance after a stunning thrashing of fellow flag hopefuls Morningside.

In an at times strange season, this was one result that came completely out of the blue as the Magpies sought ways to get into the top five.

It has been weird, almost, to see results like Saturday’s coming after the 102-point demolition by Morningside over Mt Gravatt earlier in the season.

Does this mean that the Magpies should beat Mt Gravatt by 200 points? Hardly.

But the reality is that there seems to be a struck match between all the flag contenders at this stage two rounds out from the finals.

Morningside coach Steve Wildschut was all but dumbfounded by the capitulation of the Panthers in a big home match.

“We were beaten in every aspect,” Wildschut said after the Magpies blazed to six goals to none first quarter lead and never took the foot off the pedal after that.

“They were too good. They got inside, and they got us outside – in fact in every area of the game they were on top.

“That’s all there is to it, well and truly.”

The smashing pushed Morningside to sixth on the ladder coming into what is now a very tricky game away to Labrador this weekend.

Things are the complete opposite at the Magpies. They are up to fifth and with a very realistic shot at claiming the finals double chance with matches coming up against Sandgate (home) and Surfers Paradise (away).

Not as in wake up to yourselves, more along the lines of see what you can do when you produce your best.

“It was probably a wake-up call to the group of what they’re capable of,” Morgan said.

“That performance has been in the making, it has been just around the corner.

“I think we’ve been underestimated for a while and now I think we have answered that.

“I say it was a complete performance.”

Morgan pointed to the Magpies 40 scoring shots and finally a solid four-quarter performance as the major positives.

“Probably the area where improvement was significant was our ball movement,” Morgan said.

As was to be expected there was not a weak link in the Magpie machine.

But it was noticeable that the engine room, the midfield, was where the Magpies took control through Tom Ielasi , Lachlan Woods, Riley Easton and John Macanawai.

And Anthony Corrie, back from suspension was another vital cog in his role as a forward.

“With a win like that you don’t have many bad players,” noted Morgan.

By contrast, good Morningside players were as scarce as hen’s teeth.

Exceptions to the rule were Nathan Beck at centre half-back, Peter Mollison in the ruck and half-forward Jim Rayner.

Bogy-breaker puts Demons up to third

THE Salk Oval spectre no longer hovers over Surfers Paradise after the Demons broke a 12-year drought against Palm Beach Currumbin at the Creekside venue on Saturday.

And it was hardly a fluke. Victory came on the back of a wholehearted team effort where midfield domination set the foundations after a shaky start.

The precious four points was sealed on a day when Morningside tumbled down to sixth on the back of a 101-point thrashing from new fifth-placed team Western Magpies.

The Demons, though, now sit third, level on 36 points with Mt Gravatt but ahead of the Vultures on percentage.

Now ahead of the Demons are tough matches against Mt Gravatt (away) and the Magpies (home).

“We have the opportunity to play good teams to be able to play finals, so if we’re good enough we can do that,” coach Brad Moore said.

Not too many good judges gave Surfers a hope of making the top five, especially with their horror draw over the final three rounds.

But now they have the scalps of the reigning premiers and confidence is sky high.

When the Lions led by two points at quarter-time against the wind; then by 20 points after using it well in the second term, it appeared as though the champions were off and running.

But the Demons did not read that script. They lifted and put on five straight goals in the third quarter, four of them to Dan Green and two to Cody Filewood – leading by 10 points into the final break.

They then outscored the home side by 5.6 to 3.6 for their emphatic victory.

“There was a moment there in the second quarter when I thought Palmy were going to blow us off the park but we stuck tough and we just kept in the game.

“After half-time I thought we played probably some of our best footy this year.

“We moved the ball well and got it inside the 50 when Greeny was dangerous and giving us contests.”

Surfers beat Palm Beach at their main strength, that is possession from centre contests and run from the back.

It was again noticeable just how much the imposing figure of green means to the Demons. When he is up and about the Dees look capable of kicking a winning score, as was the case on Saturday when he finished with 5.1.

Round 16 Rising Star Award nominee Rene Le Fauvre, “Mango” as he is nicknamed because he comes from a mango farm at Giru near Townsville, was sensational for the winners as a small forward.

“Mango was fantastic,” Moore said. “His work everywhere was great.

“I thought Nick Scott down back, Cassidy Haberfield and Mitch Hopkins in the midfield and Jack Taylor at the back were also outstanding.”

PBC had too many of their regular prime movers down on form after their bye the previous weekend.

The Lions looked, and played, like they were flat.

“We were outworked and outplayed at the end of the day,” Owens said.

“They (Surfers) just wanted it better. They got a roll on and when they gained momentum they didn’t give it up.

“They tried to congest the contests and it worked – they played a good style.”

PBC had few winners. Zac Harrison on a wing and half-forward was one of them, big Jack Anthony was again strong in attack and Dale Neuhaus, in a floating role across half-back, did his job.

The lucky thing for PBC was that they managed to clinch the minor premiership despite losing.

Broadbeach also fell in a shock to Wilston Grange which means the Lions now cannot be overtaken for first spot for the finals.

BEFORE running out for his 200th game for Wilston Grange, ruck goliath James McMahon urged his team mates to make his milestone match one to remember.

McMahon celebrated the occasion with a best-on-ground performance in a dominant display that will remain etched in the minds of the Grange faithful for many years to come.

“Before the game Jim spoke to the players about special moments and how he wanted to make it a memorable day,” Grange coach Nathan Clarke said.

“He said to the group ‘let’s create a memory today’.

“It turned out to be like the most perfect football day, so well scripted.”

Clarke said victory was fitting reward for the years of service the ruckman has put in for the red, white and blues, much of it through tough times.

“He started the game by running a bloke down and got him for holding the ball,” Clarke said.

“I knew right then he was going to have a good day.”

Rival coach Brett Andrews doffed his cap to McMahon and the profound impact he had on proceedings.

“They had something to play for and apparently we didn’t,” Andrews said.

“They rallied for him – they played with a purpose and we didn’t.”

But the Cats mentor wasn’t blaming only the players for the puzzling lack of direction by the team, he put his hand up for much of the blame.

“We were outworked, outplayed and outcoached,” Andrews said in a frank self-analysis of what went wrong.

What s concerning for the Cats is that even they held on to second spot on the ladder, they are not playing well at the moment.

“I think we’ve won one quarter against the bottom two sides,” Andrews said.

“So obviously something is wrong with us – but we’ve got a week off with the bye to fix it up.”

Dale Eames was one Cat spared the rod by Andrews after strong efforts at the back then in the ruck.

It was the complete opposite for the Gorillas who had any number of stand-outs on the day.

McMahon was supported by on-ballers Nick Dickson and Jack James. The pair revelled in the supply of quality ball from their ruckman.

It was a tight game with the Grange dropping numbers behind the ball. It was a tactic that Andrews conceded neither he nor his players could find an answer to.

LABRADOR’S worst losing streak for years finally came to an end when the Tigers downed Sandgate by 42 points on Saturday.

The Tigers won 16.9 (105) to 9.9 (63) at Lemke Road Oval to end a losing run that stretched back to the eighth round this season when they also beat Sandgate.

In a game of few highlights, big Tiger forward Jake Goldsmith feasted on a lack of tall timber at the back of Sandgate’s list with seven goals, four of them coming in the first quarter when Labrador made good use of a strong wind.

The Tigers led by 33 points at quarter-time but when Sandgate failed to make good use of the wind in the second term that was it for the day.

“It was a bit weird in that they had what was probably a three to four goal breeze in the first quarter,” Sandgate coach Jarad Marsh said.

“So, the quarter that hurt us most was the second. We had the breeze and plenty of play but kicked only one goal.

“We just wasted the football going into our forward lines.”

Grossly undermanned Labrador had some positives to come from the trek up the M1. The good signs from rookies Josh Deakin, Riley Watters and Kye Newson was one of them.

“They were all in their first games and they all had their moments,” coach Aaron Shattock said.

The on-baller, who was named emergency for his NEAFL club Southport on the weekend, won a wrap from Shattock.

“He keeps getting better and better,” the coach said of the teenager.

Evergreen Wayde Mills and Adam Clarke were also on top of their games and were to the fore in the Tiger effort.

For Sandgate, Jayden Patching on a wing and half-back was best, supported strongly by Jordan Maynard in the centre and defenders Ben Hogan and Mitch Crawley down back.

With the wooden spoon now headed to Lemke Road Oval, the Hawks now wind up their season with matches away to the Western Magpies next weekend, followed by a home clash against Morningside.

Cats crush Morningside in impressive finals warm-up By TERRY WILSON BROADBEACH are poised to end a QAFL premiership drought that stretches back to 1996 after... [more]