Round 12 QAFL Preview and Teams 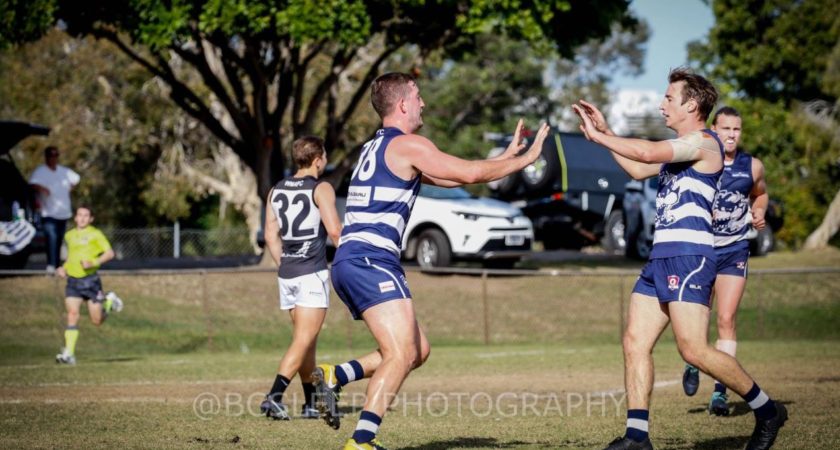 AS far as Morningside coach Steve Wildschut is concerned nothing has changed for the Panthers this week – and it has been similar for a while now.

Morningside, sixth on the ladder with four wins, have been in the middle of a five-way scrap for much of this season in one of the most evenly contested QAFL seasons, Palm Beach Currumbin aside, for years.

Morningside have to win, Wildschut knows that, or it will be difficult to keep in the race for berths in the finals.

“But it was the same (for us) four weeks ago,” he said when asked if it was a must-win clash against Broadbeach at Jack Esplen Oval.

“Each game is almost a final, as it was versus against Mt Gravatt, and versus Western Magpies and last week against Surfers.

“It’s a dog eat dog stage of the year. They’re all-must wins from here on in – and that’s for everyone, not just us.”

The Panthers have made five changes to the side that went down to Surfers last weekend after a poor third term set up the loss.

But they have lost towering Aspley ruckman Will Wolbers.

But the Cats “ins” are significant, chock full of B&F status.

The list is last year’s club champion Evan Panozza, dual club best and fairest Ryan Pantic after a suspension, and forward Harrison Kerr, back from NEAFL with Redland.

The additions boost Broadbeach’s firepower and coach Brad Andrews rates this week’s side, on paper, stronger than last week when the Cats accounted for the Western Magpies with a strong second-half effort.

“We were a bit worried about Morningside’s height up there but big Will Wolbers hasn’t been named so that is one possible problem out of the way,” Andrews said.

“We’re starting to get some momentum going, but we know Morningside at Morningside is not an easy task

Andrews said Pantic is fired up for a big return. The on-baller is, according to
Andrews, looking as fit as he has been in years.

“We just have to keep winning,” he said. “We have our fair share of injuries but we’re still looking pretty strong.”

LABRADOR coach Aaron Shattock believes the key to stopping rampant defending champions Palm Beach Currumbin is to put a dent in their confidence.

The Tigers take on their 2017 grand final conquerors in another big Gold Coast derby at Cooke-Murphy Oval where Labrador’s finals future could well be on the line against their unbeaten rivals.

And in Shattock’s eyes the ability to pull the rug from under the Lions could be the major player.
Shattock rode a wave of confidence through the Brisbane Lions’ glory premiership years and understands clearly what self-belief can do for a side.

Sides with their tails up take the game on and this is exactly what the Lions have done against Labrador in their past three wins – two of them in the 2017 finals and again in the second round this year.

Asked what concerns him most about the PBC game plan, Shattock replied: “It’s not just their run, but their confidence to run.

“They’re not faster than us but when you play in a side that’s winning like they are you take off quicker, you anticipate quicker, you have the confidence to take off when the ball’s a bit more in dispute.

“Confidence is a beautiful thing, it allows you to dictate a lot of things, how you run, how you use the ball.”

All that said, Shattock firmly believes his Tigers, premiers back-to-back in 2015/16 can do the same. The fact is they have to keep building on some promising recent form if they are to contend for this season’s title.

Still missing injured big man Jake Goldsmith (groin), the Tigers brought back Ben Walker and Cooper Portelli and may also regain Dylan MacCombie for his first game back from a knee reconstruction.

After their massive win against Sandgate last round, PBC have bolstered their ranks with the returns of forward Jarryd Douglas, midfielder and captain Jesse Derrick and play-making flanker Josh Woolley.

The Lions also regain 2017 grand final defender Dirk Koenan as they steadily regain strength heading into the run to the finals.

It is a sobering thought to consider that still to come back into the side are Jackson Emblem, Stephen Thynne, Todd Grayson, Liam McNeven, Jon Croad and Brad McDonald.

Once again there should be little love lost between these great Coast rivals, although any repeat of the round two clash, which featured several reports, is unlikely given the situation getting closer to the finals.

SURFERS Paradise have a sniff of finals in their nostrils and can ill afford to slip up against Sandgate in their clash at Lemke Road Oval.

The Demons jumped into fourth spot on the ladder after beating Morningside last weekend and, if they can beat the struggling Hawks – coupled with a loss by Western Magpies to Mt Gravatt on Sunday – could be sitting two wins clear of fifth and sixth teams after the weekend.

Yet there is caution in the Surfers camp, remembering they drew the corresponding fixture at Lemke Road Oval last year.

“Most definitely Sandgate at Sandgate very a difficult proposition,” Surfers coach Brad Moore said.
“We drew there last year and I’ve been told Surfers have struggled there over time.

“We need to make sure and consolidate the good performance of last week. There’s no resting on our laurels, we need to keep it going.”

For the trip up the M1 the Demons have brought in Southport NEAFL-listed Tom Ellard, Matt Doran and Cody Filewood among four changes to a winning side.

The interesting inclusion is Tom Ellard, who last weekend played for Palm Beach Currumbin against Sandgate but who has since been cleared to finish the season out with Surfers.

Sandgate regain Connor Stackelberg from Aspley NEAFL duties, Trent Lowrie and may have youngster Toara Marango depending on requirements of the Brisbane Lions in the NEAFL.

The Hawks continue to battle on and as coach Jared Marsh said all the Hawks can do is go with what they have.

“With a young group all we you can do is go out and compete, play the way we want to play, and see what happens,” Marsh said.

*This game will also be livestreamed

THE one constant in this QAFL season of ups and downs has been the Western Magpies.

The Maggies may be in a tight battle to stay in the race for the finals – and they have a huge match against Mt Gravatt at McCarthy Homes Oval on Sunday – but that constant has been that they guarantee a competitive afternoon for opposition teams.

It has been a while that, in a nine-team competition where the Magpies have a 4-5 win-loss record for the season – that a side can boast having the third-highest percentage.

Away from a big win against Sandgate, it has been a case of either lose narrowly or win the same way, with not much in between.

“Don’t worry I know all about that,” Magpies coach Brydan Morgan said when asked about the percentage of 125.7 of his team.

“Our biggest loss has been by 26 points last week but that’s just how it falls,” Morgan said.

“We can control only how we go about it but hopefully things will turn and we get our fair share of the close ones.”

Another close one is on the cards, though, when these south-Brisbane rivals lock horns in the Magpie nest.

The Magpies folded after half-time against Broadbeach last weekend when Morgan identified a number of areas of concern, particularly around the ball.

“Just a few things we’ve been doing around the footy,” Morgan said when asked for specifics.

“We need to tidy our skills up, they’re not quite as clean as we need them to be and I think that has cost us some close games.”

Mt Gravatt, on the other hand, would just about wrap up a top-three spot for the finals if they can see off their rivals.

But their coach Daniel Webster remains cautiously optimistic if a win would cement their position.

“Would a win make us secure? Not in this competition,” Webster said as the Vultures come off the back of a win against Wilston Grange.

“Our focus is legitimately week to week at the moment and we tick off the boxes as we go.
“The good thing for us is that we won those games (close ones) early.

“We know the Magpies are going to be up and about like in the first round when it was a tough, close game.”

Webster said the Magpies have a team full of hard bodies, they run hard and have quality across the park.

But the Magpies’ attacking formation is a worry, he said, even if he has Sam Stubbs and Jordan Bain set for a potent offensive pairing.

“They have a lot of offensive options and they can mix those options around, which makes it difficult to match up against,” Webster said.

Both sides seem to have balanced their ins and outs.

The Magpies have regained Sam Copland, Aaron Highlands, Aaron Maricic and Will Johnson while the Vultures have Bain and Jack Coghlan back in action.

The Western Magpies will also be debuting their Indigenous Guernseys during the match to commemorate the start of NAIDOC Week on Sunday. 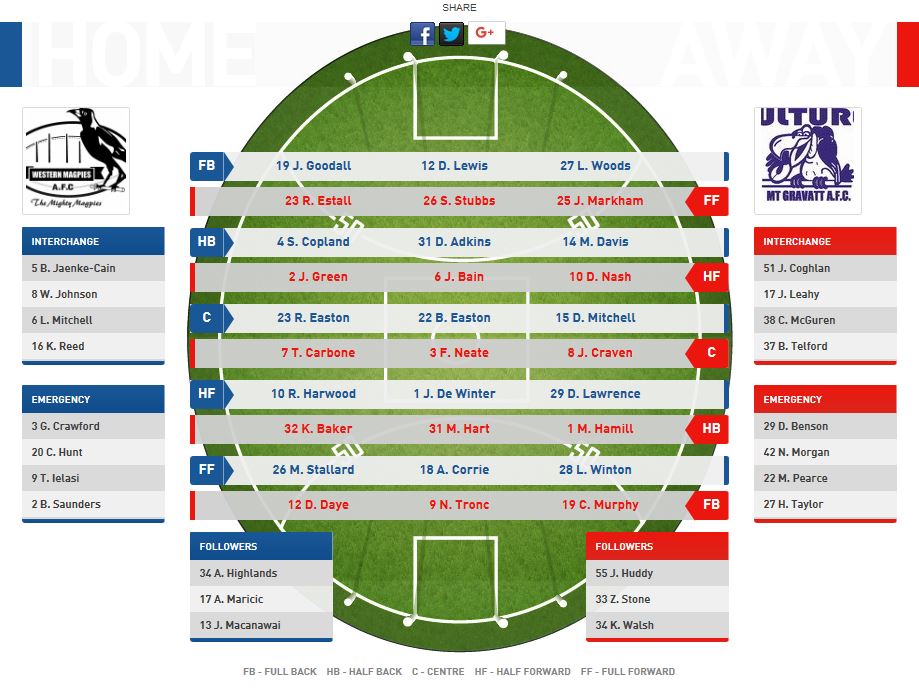 Jimboomba Redbacks to hold Bowell Cancer Australia Charity Round this weekend
“I was a bit gobsmacked": Villalba to make QAFL Umpiring Debut