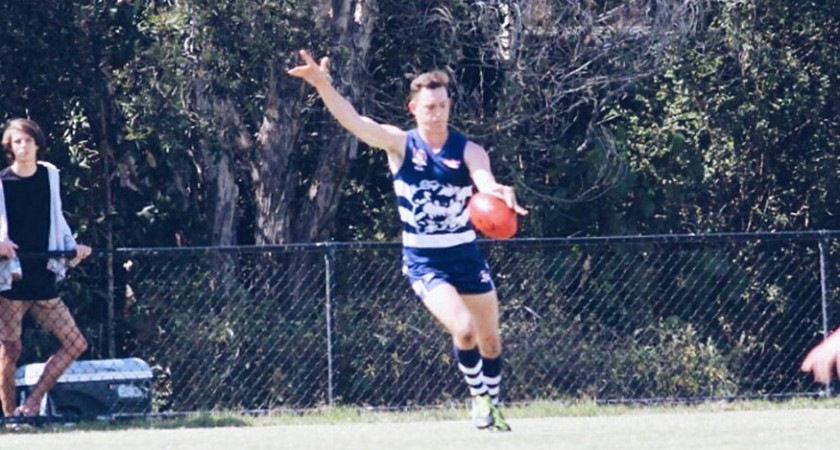 The 20-year-old made the most of his rare chance up front in the Broadbeach Cats’ away win over Sandgate.

O’Donnell proved his versatility as a young player by performing in the forward line, something he hadn’t done since his junior days.

“Before the game I was hoping to play down back because I played alright there the week before,” he said.

“I was happy to play wherever BA (Brett Andrews) put me and I just went out there and did my role.

“It was great to kick four goals, but to be honest I would have liked to kick more as there were a few chances I missed.”

O’Donnell played his junior football for the Carrara Saints and his love of big forward Fraser Gehrig inspired him to play up front.

“As a St Kilda supporter I used to think I was Fraser Gehrig.

“I wanted to be the G-Train and I think that’s where I got my forward prowess from.”

O’Donnell has been battling chronic fatigue syndrome and mental health issues, and attributes the Cats’ management and culture as the reason why he has been able to play so well.

“I am thankful for everyone down at Broadbeach including the reserves coach Lobba, head coach BA, and manager Dave who are always willing to have a chat,” he said.

“They are so supportive and should be recognised for the culture that they have created at the club.”

O’Donnell says that his health issues have changed his outlook on football.

“I can’t think too far ahead. It’s not under my control I just want to enjoy my footy,” he said.

“Footy was everything to me as a kid, however over the last year I have learnt that there is more to life.

“I have found my sense of security and identity in God.

“Footy doesn’t validate me, but my ability is a gift that’s been given to me and my only responsibility is to enjoy it.”

After a lacklustre first half the Broadbeach team responded well to a spray from their coach and senior group.

“At half time our senior group pulled us together and made sure we finished the game strong,” said O’Donnell.

“We didn’t want to win ugly, and the team responded really well to the challenge resulting in a great second half performance.

“After the match BA reiterated the fact that we had survived a big drive up to Sandgate and got the four points, which we need to make a habit of doing.”

Despite their young list, O’Donnell believes the club can achieve success this year and beyond.

“It would be silly to set our sights on the top of the ladder but we can genuinely beat the teams we’ve got coming up and make the finals,” he said.

“The Colts boys from last year are a tight knit unit. We all love Broady and therefore I think we will naturally stick together.

“With our young list we could definitely push for some big finals campaigns and a flag over the next few years.”

Broadbeach, who are in seventh spot, host Surfers Paradise this Sunday at 2pm.

A win in the local derby could see the Cats move above the Demons into 6th spot on the QAFL ladder.