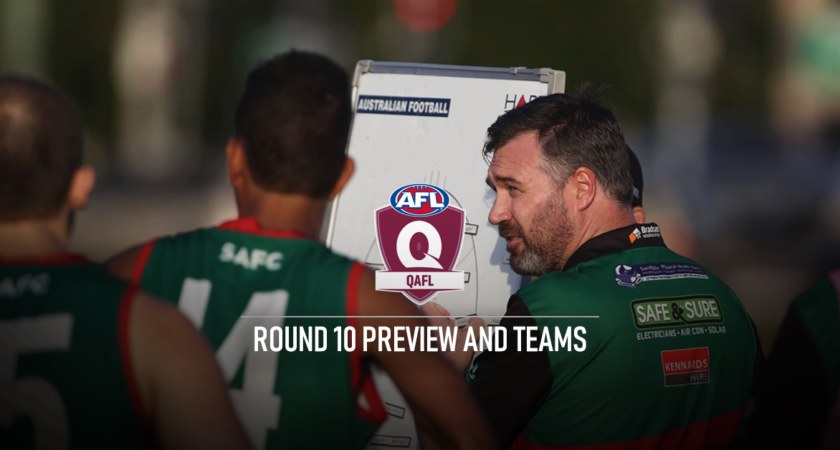 Fast forward to the current and it is Watts and Boon who will match sideline tactical wits in a huge afternoon for local footy when Morningside take on Mt Gravatt in a QAFL blockbuster following a NEAFL match between Redland and the GWS Giants.

The Watts-Boon connection is just one of many Panther-Bomber connections for the big double-header at Jack Esplen Oval.

It is worth noting that, in 2009, Morningside beat Mt Gravatt in the QAFL grand final and on the same day they also won reserves (beating Redland) and colts.

So, to honour those teams, the Panthers are staging a 2009 reunion as well as a Pink Panther day to raise funds for the Ronald McDonald House.

Boon is looking forward to the battle against Watts, a man he describes as ‘obviously a good coach who knows the game’.

“It’s going to be a good day, obviously, with my old club and Doggy’s old club playing on the same day,” said Boon.

“It is exciting for me to be coaching against him.”

Watts is rapidly building a reputation as a deep thinker of the game and he has certainly noted some subtle changes in playing styles of Mt Gravatt under Boon.

“They are a hard, competitive team and you can see he is implementing a style where they hold on to the ball a bit more,” said Watts.

“And I am a huge fan of his ruckman Andrew Smith.”

At selection time the Panthers made six changes and the Vultures made seven.
There are some big inclusions for Morningside, most noteworthy the return of ruck and captain Peter Mollison from his run-in with a hedge trimmer.

Lachlan Russ and Redland-listed Aaron Robertson are two other big inclusions and the Panthers also handed a debut to Anthony ‘AJ’ Stewart, who played alongside Nathan Colenso in the Park Ridge QFA Division 2 premiership side last year.

At Mt Gravatt the losses include NEAFL selections Jack Coglhan (Aspley) and Aaron Christensen (Redland) and Jayden Crawley is injured.

Western Magpies coach Brydan Morgan has lived up to his threat of widespread changes to his side following a run of poor form.

The Magpies are hosting Surfers Paradise at McCarthy Homes Oval on Saturday and, true to his word, Morgan announced that six unforced changes have been made following poor performances against Morningside and Labrador.

In all, the Magpies have seven new faces this week with only tall ruck-forward Aaron Highlands forced out by injury.

But the outs are more than balanced by a list of ins that includes captain and defender David Lewis and regular seniors Drew Mitchell and Jack Austin.

With ex-Brisbane Lion midfielder Ryan Harwood steadily building back his form base, the Magpies are definitely looking stronger and stronger each week.

It is, as Morgan said, starting to resemble the starting 22 the Magpies have been searching for after only two wins so far this season.

There is a lot hanging on this clash, particularly so for the Magpies.

They are in desperate need of a win, especially one against a top-three contender, because they have won only twice this season, one of them against bottom side Sandgate, and in real danger of dropping back too far behind the leading division.

Yet Morgan believes the best is yet to come from the Magpies.

“We’re only one game off the top five and in a couple of weeks we could be a game clear in the top five, depending on results,” he said.

“Yes, we certainly haven’t made it easy for ourselves. Yet the weekend 22 is getting close to where the club wants their line-up to be.”

The Magpies get hugely promising teen ruckman Samson Ryan this weekend and joining him is fellow Allies U18 player Bruce Reville for his seniors debut.

They, too, have brought in a debut-maker in ruckman Cameron Topping, a club junior product, for his debut.

The journey to Sherwood is a tough one, according to Surfers coach Brad Moore, perhaps the toughest away assignment in the QAFL.

“The Magpies at Magpies – that is always a tough one,” he said.

For Wilston Grange a trip back to the Gold Coast is all about redemption for an inglorious showing the last time they hit the M1 to play on the Glitter Strip.

The Gorillas are playing 2017-2018 premiers Palm Beach Currumbin at Salk Oval and will be desperate to show their loyal supporters that the Grange side that lost by 120 points against Broadbeach in round eight is far, far better than that.

After that loss coach Barry O’Brien actually apologised to the Cats for the effort put in by his charges, who responded the next weekend when they ran Morningside to a couple of goals.

“The obvious aim is to go there and to be competitive – and we’re going down there pretty confident,” said O’Brien.

“They’re the number one team in the competition and the team everyone is striving to beat.”

A factor in the Grange’s favour is that they beat PBC at Salk Oval in 2015, so they don’t mind playing on the small Gold Coast ground.

PBC will still be without star forward Jack Anthony, which no doubt brightens up the mood in the Gorilla camp, and star midfielder Jason Burge will miss another week with his broken foot.

Plusses for the Lions this week are the return from injury of rock-solid defender Jackson Emblem and the inclusion of Southport (NEAFL) forward Mitch Johnson.

Still to come back are Anthony, Burge, Josh Woolley and Todd Grayson, so the premiers are building up nicely for the second half of the season.

The Gorillas have lost key defender Frazer Eaton to injury in the state game and Isaac Corvo has been recalled by Aspley in the NEAFL among six changes.

An inclusion for his debut is Noah McFadyen, 16-year-old brother of Brisbane Lions player Connor.

Labrador know they must beat Sandgate on Saturday to maintain their mid-season surge of form and translate it into finals participation.

No doubt the Tigers will start warm favourites to beat the Hawks at Lemke Road Oval on Saturday where anything but a victory will be expected.

Labrador sit on three wins for the season, level with fifth-placed Mt Gravatt on the ladder, so four points tomorrow will be invaluable.

That is because coming up for the Tigers are three huge games against Gold Coast rivals Surfers Paradise, Broadbeach then Palm Beach Currumbin.

“We need to string some wins together then the top five will sort itself out,” said coach Liam Burke when asked about possible finals participation.

“After this week we play the three top teams in a row, so it’s important to put a performance together this weekend.”

Labrador have only two changes, losing Southport-listed Anthony Djurovitch to injury and Lachlan McDonald to the Gold Coast Suns.

“We have a couple of more mature-age bodies this week,” noted coach Jared Marsh as the Hawks search for ways to get a win on the board.

“It’s nice to have Aaron and Josh Prebble available because that is what we lacked last match against Broadbeach.”

But Marsh said Sandgate continues to be a work in progress and is dedicated to making it work at Lemke Road.