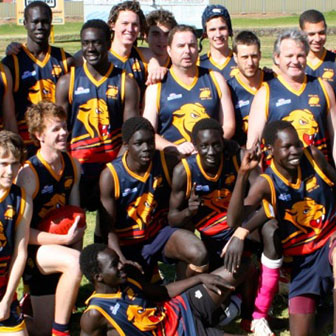 By Andrew Hamilton, The Courier Mail

THEY call him the Pied Piper.

The shrill blast of whistle sends a stampede of skinny little legs pumping across the turf of Toowoomba’s Baker Street oval.

Momentary chaos then control, 100 odd beaming faces, more than half of them Sudanese, gaze up at Ross Savill.

We knew what to expect. It was the tip-off about the University Cougars footy club with 55 Sudanese kids scattered through the junior grades and the extraordinary work of Savill, a social worker and youth pastor, that had drawn us up the range on a chilly winter afternoon.

Still, it was slightly disorienting.

The four posts of our indigenous game, the iconic Sherrin’s and chasing after them hordes of young Africans!

Ten minutes in and the scenes playing out in front of us where all too familiar, only the skin colour and backgrounds of these young footballers differentiated this training session from those taking place that Thursday afternoon right across the country.

In a few captivating minutes ten-year-old Patrick Aleer flew fearlessly into a contest and pulled-up lame from the heavy collision. As he gingerly walked past he muttered “corkie” with the serious demeanour of an athlete who fears he may face a week on the sidelines.

But then a long-high ball came in and Patrick’s best mate Izaac looked like getting an easy possession. The injury was instantly forgotten as Patrick, all 50 odd kilograms of him dived back into the fray. A scuffle of arms and legs ensured before Izaac emerged with ball in hand and sent a mongrel punt, that can only be described as an inside-out torpedo, floating 25m back in the direction it came from.

Izaac celebrated his little victory over his best mate with a little shimmy and a bit of trash talk and it was classic. AFL superstars Cyril Rioli or Chris Judd would have had identical reactions back in the under 10s. You could picture your own kids doing the same.

For a couple of hours a week Patrick and Izaac aren’t outsiders. They are no different to the kids they share class rooms and sporting fields with, they are just mad keen young footballers.

And Ross Savill, two time Auskick volunteer of the year and the recipient of an OBE in 2010, is the man who has made this all happen.

When he looks back at how this flourishing program, which is now starting to pump a few players into the senior ranks, most notably giant ruckman Manylok Malek, who is a star in the making, he shakes his head in wonder.

“I’d like to say there was some kind of master plan but there wasn’t, it just kind of eventuated,’’ Ross said.

It eventuated because Savill is the type to always seize an opportunity to help someone else.

That’s how, in 2005, this born and bred Queenslander suddenly found himself drawn into a sport that had barely crossed his radar.

It started when his son Jackson, after catching the bug following an Auskick program at the Rangeville State school, asked dad if he could give club footy a go.

Ross dutifully took him down to the Cougars but instead of ducking off, he decided to hang around and watch.

First he would collect the footies or help move the cones, then one week one of the coaches couldn’t make it and he was asked to take a few drills.

One day Allan Smith, the president at the time, asked Ross if he would consider completing a coaching course, the club’s shout.

So began the career of Ross Savill, supercoach.

He coached Jackson’s under 10s and 11s sides for the next two years before he was asked in 2007 to go down to the younger grades and spark up some interest.

Club president Kelli Bolton says in 2007 there were just 10 players signed-up for the Under 8s and 10s.

The Cougars now have 103 juniors and all are welcome, in addition to the large Sudanese contingent, there are five Irishman, seven of Aboriginal or Torres Straight heritage and 21 females, many of whom are from Sudan.

“Look at us now, it has been remarkable, Ross is like the Pied Piper, “ he said.

Ross is at pains to point out that it is very much a team effort from a tightly knit football community up on the edge of the Darling Downs that are committed to giving opportunities to kids.

“It’s not really fair, there is a lot of people involved in this, I just seem to be the one who gets the credit,’’ he said.

But there is no escaping the explosion in the numbers came through the arrival of the Sudanese and it was the Pied Piper, who dragged them along.

Again, it stemmed from an act of generosity.

Ross had spotted one kid kicking a footy at the youth group he runs at Humeridge Church and struck up a conversation with the lad. It turned out the kid wanted to give an Australian game a go.

Ross delivered a quick pitch on the merits of AFL and offered to pick him up for training later that week.

When he arrived the lad had two mates with him. The next week there was two more.

It wasn’t long before Ross had to ring around to find some extra parents to help ferry the new arrivals to training. Now they need a bus.

The master stroke came when Sisilia Barac, Izaac’s mother, approached him after church one Sunday and told him of her concerns that her limited English was making it hard for her to help her four kids with their homework.

Most of these families are doing it tough. The husbands and wives often pass like ships in the night.

Dad home from a day’s labouring or in the meatworks, mum off to a night’s commercial cleaning. That couple with a language barrier made it tough to play a key role in their kid’s schooling.

Ross did the rounds of the local university, looking for education students who could spare an hour of their week to help out. Then he scoured around town for retired teachers.

With the blessing of the parents he cut a deal with the kids. Footy was his trump card.

Do an hour of supervised homework on a Tuesday and you can play bon Saturday.

“Throughout the afternoon she talks fondly of the soccer program Ross runs. To her it is just an Australian adaption of the only football she knows.

Like people the world over, regardless of race or religion, Elizabeth wants a better life with more opportunities for her kids.

“The homework is very difficult for some of us mothers to understand and we all feared our kids would fall behind,’’ she said.

“It is great what Ross is doing with the soccer and the kids love it but it is the homework that is so special to me.’’

Many Cultures, One Game
From Zimbabwe to Calamvale