Roos through to QFA North semi 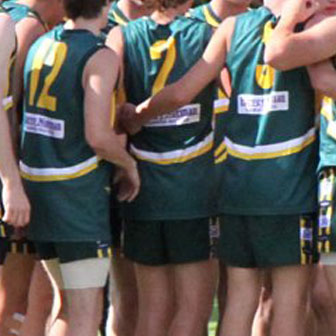 By Matthew Bezear and Rebecca Palma

Maroochydore will face Kedron in the semi-finals after a scrappy win in wet conditions over Caloundra in their elimination match at Maroochydore.

After heavy rain for two days left the oval waterlogged, it was clear from the opening bounce this match was going to be won in the trenches and whichever team was able to make the most of chances given would emerge victorious.

The first few minutes of the game were spent at stoppages on the wings as both teams struggled to find firm footing and effective disposals were few and far between.

The first real goal opportunity was botched by Maroochydore’s full-forward Jarryd Hill after breaking free from his marker 20 metres in front of goal unleashed a dribble kick which pulled up short in a puddle.

Caloundra scored the first goal of the match after receiving a 50 metre penalty for dissent with Quinten Ross slotting the goal.

Maroochy hit back quickly with Frederick Beytell snapping a beautiful goal from a stoppage inside 50 to take the Roos into quarter time in front by four.

The second quarter yielded more scoring opportunities for both teams as they got used to the unrelenting rain and wind.

Maroochy came out with a clear directive to win stoppages, which they dominated in the quarter to kick four goals, including a great individual effort from centre half forward Gregory Stirton who beat three defenders to nail a goal from 35 out.

While Caloundra struggled at the stoppage, once they found space they rebounded off halfback in some enterprising runs down the wing.

With Caloundra trailing by three goals at half time, Coach Russell Evans asked for longer kicks and more urgency in getting to the contest.

‘In wet conditions like this if you try to kick the ball too short, it’s hard to mark,’ said Evans

After half time, the rain finally took a break and the ball movement improved dramatically with both team struggling for inside 50s.

Caloundra made the most of the reprieve from the rain with their taller forwards able to capitalise on easier marking conditions and booted Caloundra to within three points.

The break in the rain did not last long as the siren for the start of the fourth quarter seemed to signal to the heavens that it was time to bring back the rain.

This brought out the toughness in both teams with neither wanting to give an inch, creating stoppage after stoppage as the ball was bogged down in midfield for most of the quarter.

Caloundra’s efforts were finally beaten when Jack Johnson kicked the final goal of the match against the flow of play after a turnover inside defensive 50, the Roos winning (7,9, 57) over Caloundra (6,4, 40) .

A sore but jubilant Maroochydore sang the team song as coach Brett Maloney spoke about the team not getting too far ahead of themselves.

‘It was a team effort right across the board,’

‘We have a final next week against Kedron,

‘We want to be there when there is three left at three o’clock next Saturday.’

The Lions were scoreless until the final minutes of the first quarter, still only managing to slot a behind.

Tiger Brett Duke was the go-to-man in attack and the dangerous Tigers’ team were running laps around the Lions.

Lucky for Kedron, their Final campaign is not yet over as they get to play Maroochydore this weekend.

Noosa will go on to play first placed Mayne, and the winner of that game will find themselves a week off and a place in the Grand Final.

The Bombers took a while to warm up but once they did they were unstoppable.

Despite the home game the Roos couldn’t hold the fort.

Ashley Hockey kicked three goals for the Bombers to be their best player on the day.

Both teams will have a chance to play in this weekend’s Semi Finals when Robina takes on Kenmore and Burleigh fights for a Grand Final spot against Springwood.

Yeronga South Brisbane has been left heartbroken after a nail-biter that left them in one point of difference against Kenmore on Saturday.

The Bears had control of the game early and at the end of the third quarter they’d left the Devils 16 points behind.

Determined to not go quietly, the fourth quarter saw the Devils fire up to reclaim victory but had they of kicked at least one more point, percentage would have been in their favour and one more goal, the game.

Kenmore can count their blessings as they move forward to play Robina this weekend in the 1st Semi Final.