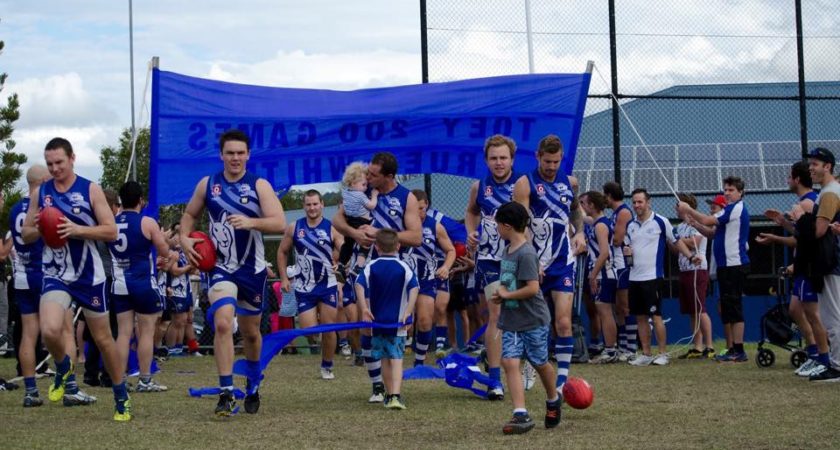 Community football will resume for the first time in 2019 this weekend with the commencement of the QFA Division 1 HART Sport Cup and QFA Division 2 Competitions.

In all, the opening weekend of matches will see 16 matches played across the South East in both the senior and reserve grades.,

Maroochydore will kick off their premiership defence on the road in Brisbane’s North where they face Aspley at Voxson Oval.

Elsewhere, Alpha Sport Preseason Cup Champions Caloundra, will commence their season at home against Springwood, who have acquired the services of former QAFL sharpshooter Jordan Bain over the summer.

Perhaps the biggest occasion of the round however, will be seen at Scottsdale Drive on the Gold Coast, where Robina stalwart and club President Heath King will lace up the boots for his 250th game in the blue and white.

“Toey”, as he’s better known, is a much-loved and well-respected leader at the Roos and does a phenomenal amount of work for the club, on top of running a business,” Robina Vice President Sally Crosswell told aflq.com.au.

King, 37, joined the Roos back in 2002 from the Manuda Hawks in Cairns, and following a brief return to the state’s north, he settled at Scottsdale Reserve in 2005 where he has remained ever since.

In his first season, the ruckman formed part of the Roos’ 2005 Premiership team and in 2009, he became club captain.

As the spiritual leader and captain of the group, King led the Roos to another premiership in 2010 where he was voted the club best and fairest and league runner up best and fairest.

The Roos will host Coolangatta in a Gold Coast derby to mark the occasion, coinciding with the club’s major annual fundraiser, the $4000 Reserve Raffle, that will be held following the game.