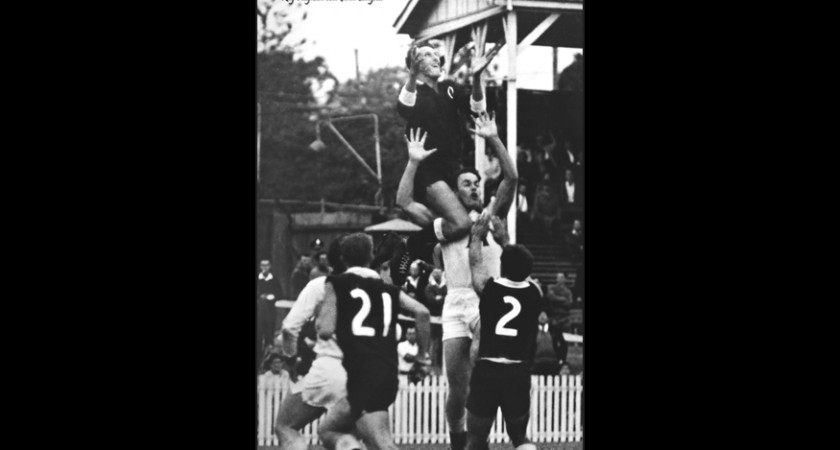 When it comes to photographing footy in Queensland over a long period of time, you would be hard pressed to find someone better than Ron Lockens.

Through the eye of a lens, he has seen champions of the game strut their stuff, iconic moments, and some cracking games.

Lockens – a life member of AFL Queensland, the Brisbane Lions  and Wilston Grange (where he is a current patron) – is almost single-handedly responsible for the photographic library of AFL Queensland over the last 40 years.

In our 150th year, we asked Ron to go through his favorite 15 photos he has taken over the years.

We will countdown from 15 to 1 over the course of this week. Today we get a look at the top three!

He was my inspiration to pick up a camera, just to try and capture some of what he did. He came here in 1971, walked into Hawthorn the same day as Leigh Matthews, before deciding to come up and play with Wilston Grange. The photo was at Hickey Park against Morningside. We used to have severe frost, because it is such a low level ground. Once the frost hit, it turned into a bit of a dust bowl. 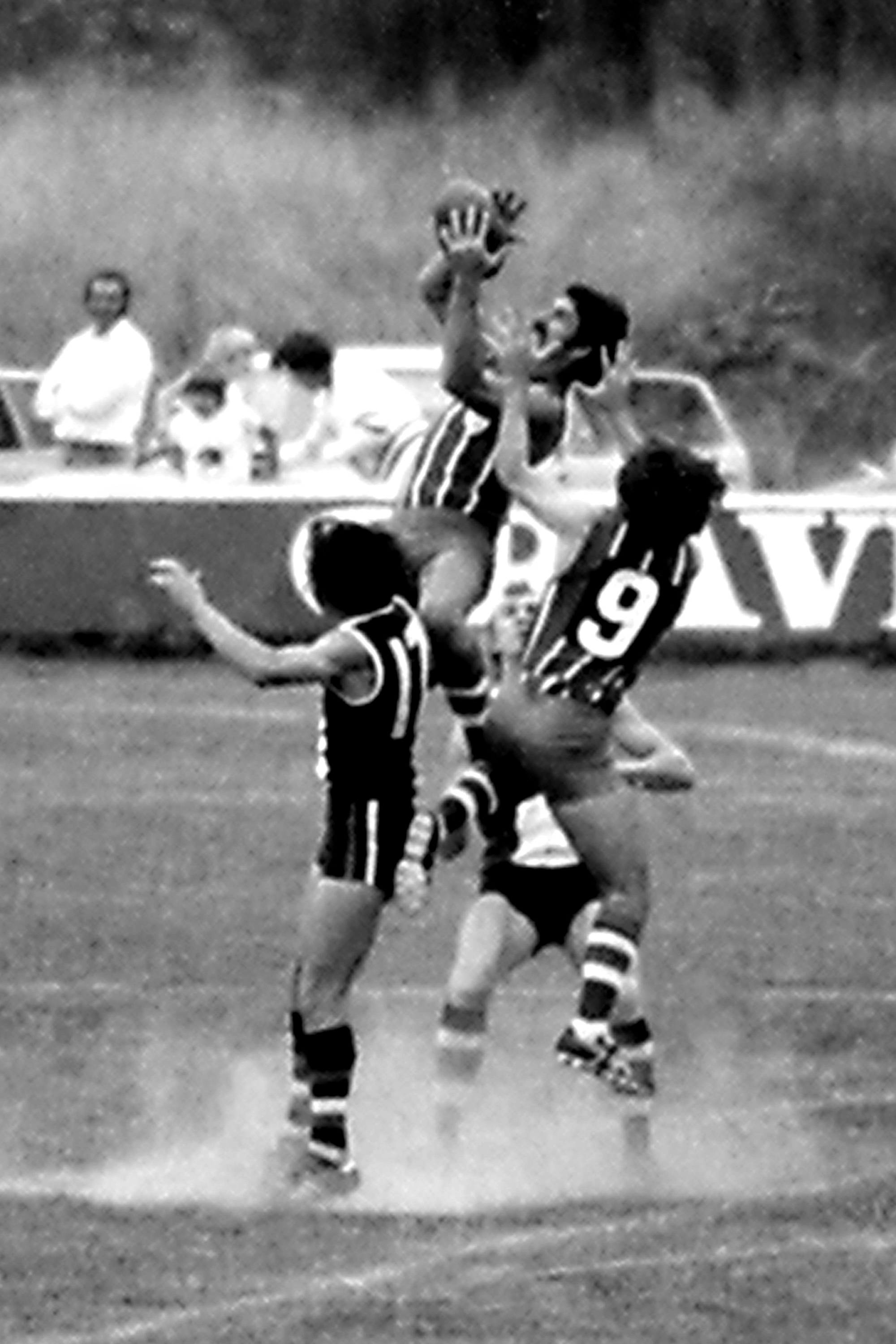 For a full back to be able to back his judgement against Glen Middlemiss is amazing. He used to cut his sleeves in his jumper to enhance his muscles. For a fullback to stand on a bloke like that, who is already in the air, I couldn’t believe what I was seeing. To take a photo of a fullback jumping over a full forward is always something I have loved. I even think in the background of the shot are his father and brother. 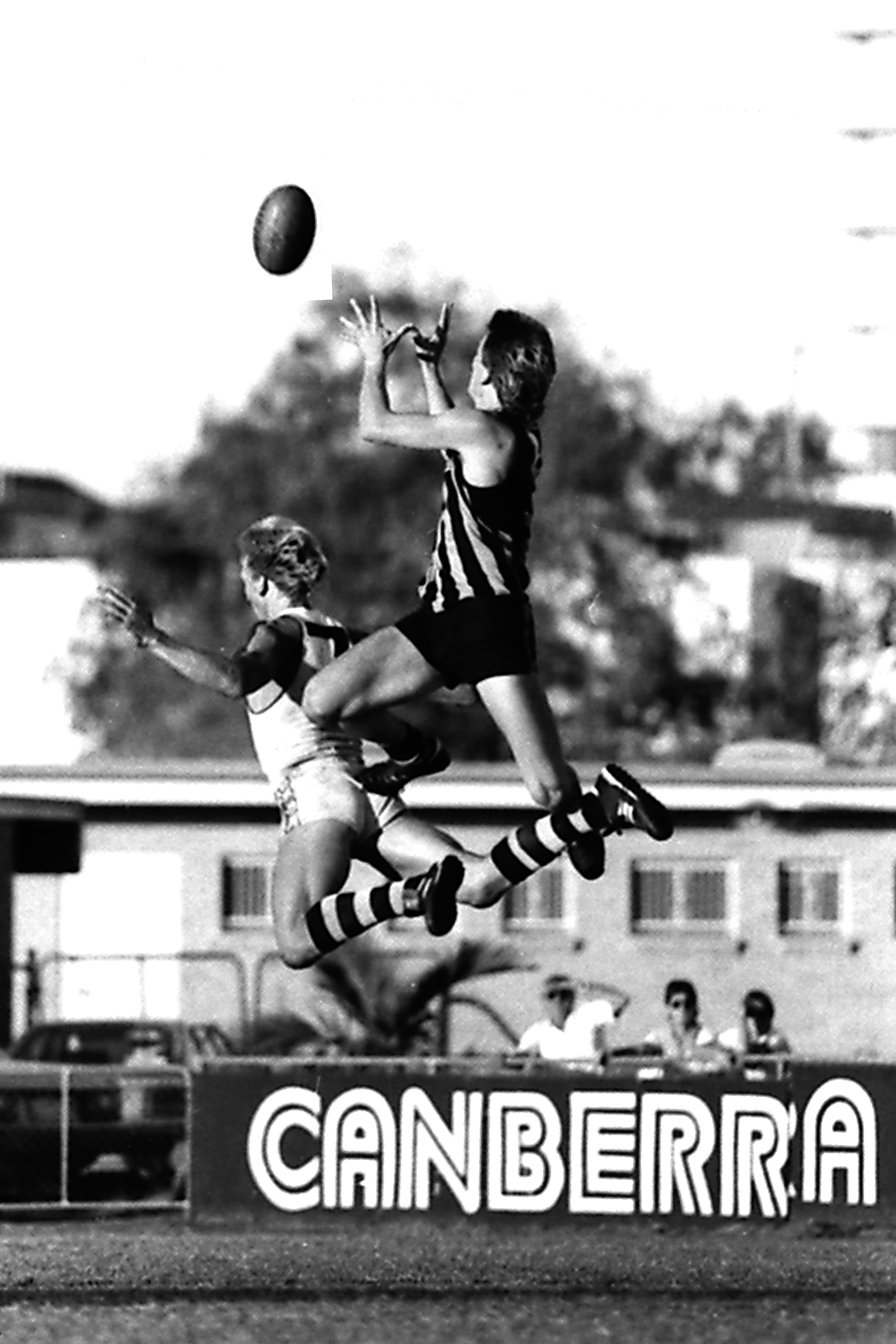 #1 Ray Hughson
Definitely my favorite of all time, and a mark that went into Queensland footy folk-law.

Get the full story of the mark, and the photo HERE 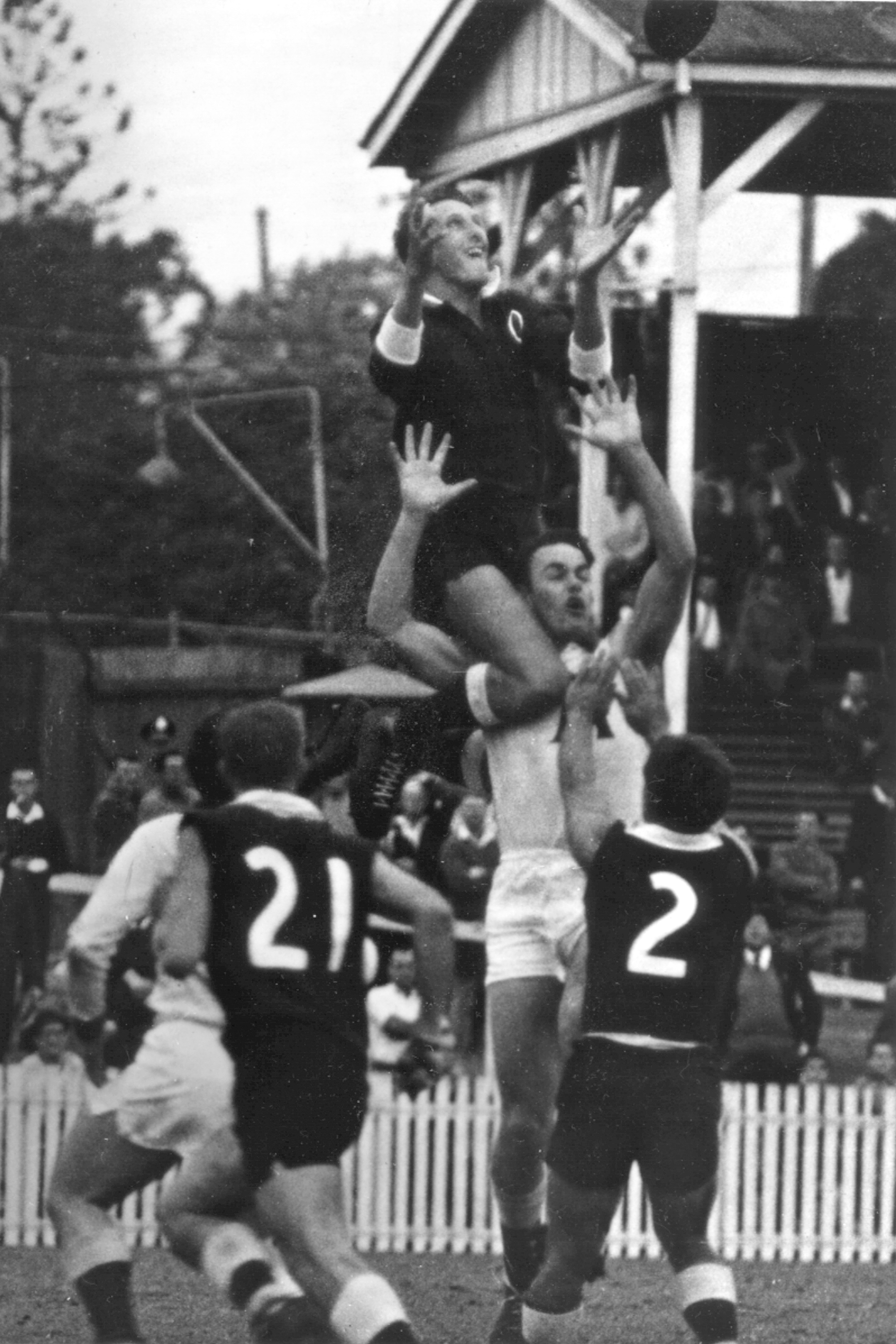 # 15 Graham Jewell
He was at the start of his QAFL first grade career. Represented his state on many occasions. Behind the photo is the old Gabba scoreboard in the background. He went on to play 260 for Wilston Grange, even though he went south for two years.

# 14 David Craig
David was a high leaping centre half forward who really stood out when i photographed games. He played games with North Melbourne before coming to Queensland and made a name for himself. 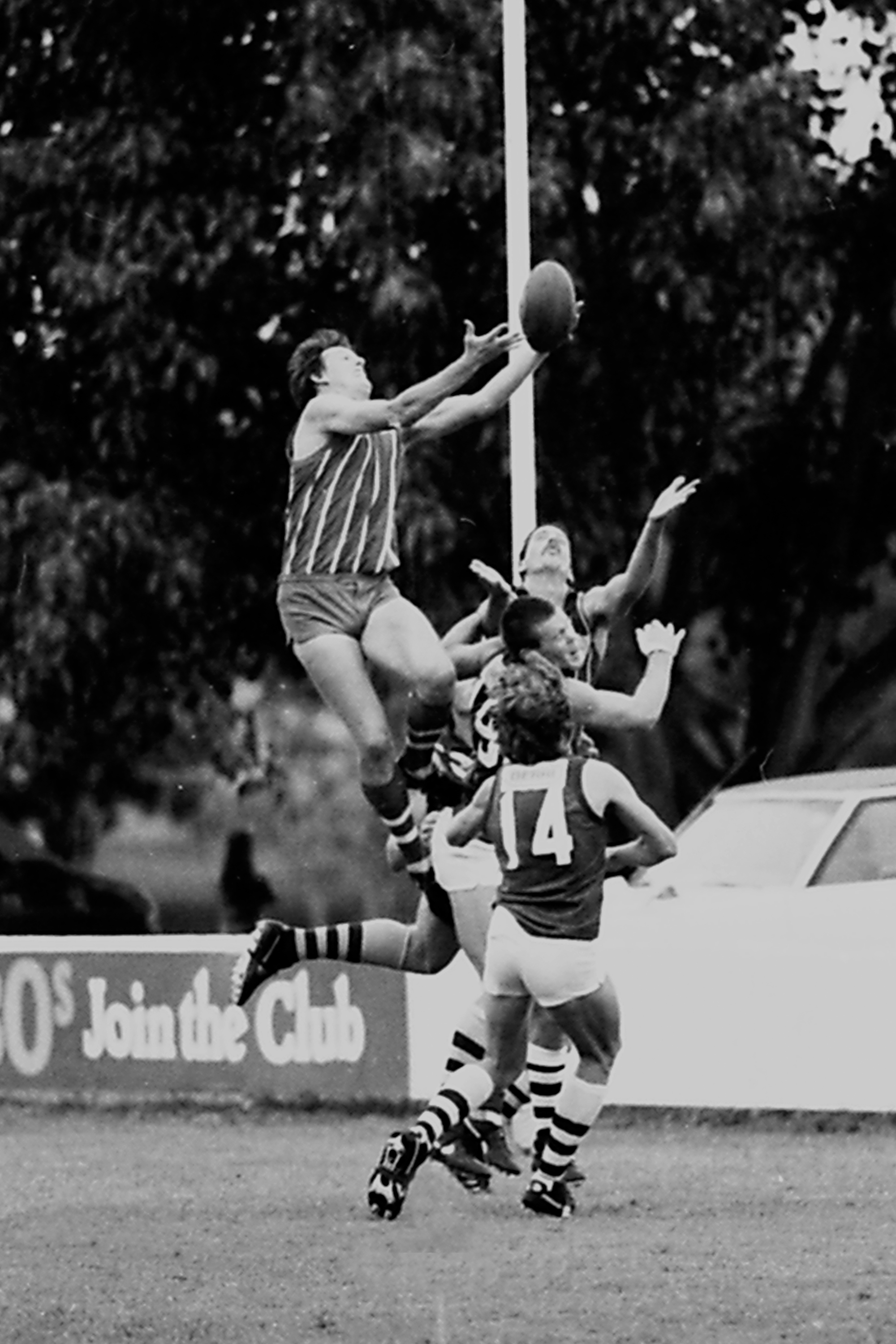 Grimley was a great Queensland footballer. He was one of the first fooballers from Queensland to journey south and play VFL. He kicked six goals on debut for Fitzroy, and returned home the next season because it was too cold. His son Brett went on to play with Fitzroy and his son Sam is playing with Essendon this year 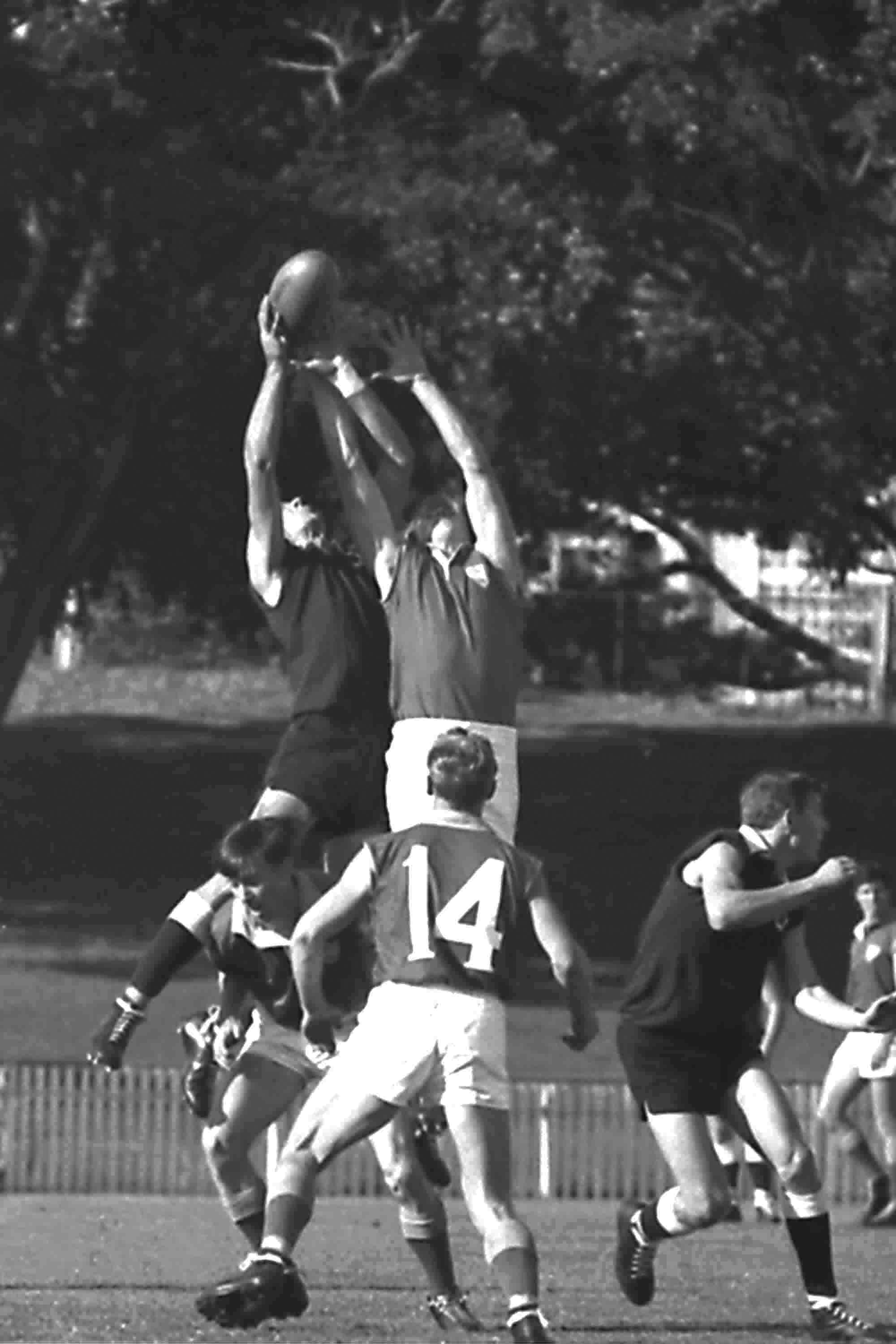 This was taken when Leppitsch played with his given QAFL club, representing Wests at the Gabba, a pretty special ground for him. It was always great to see players of that caliber in the QAFL. 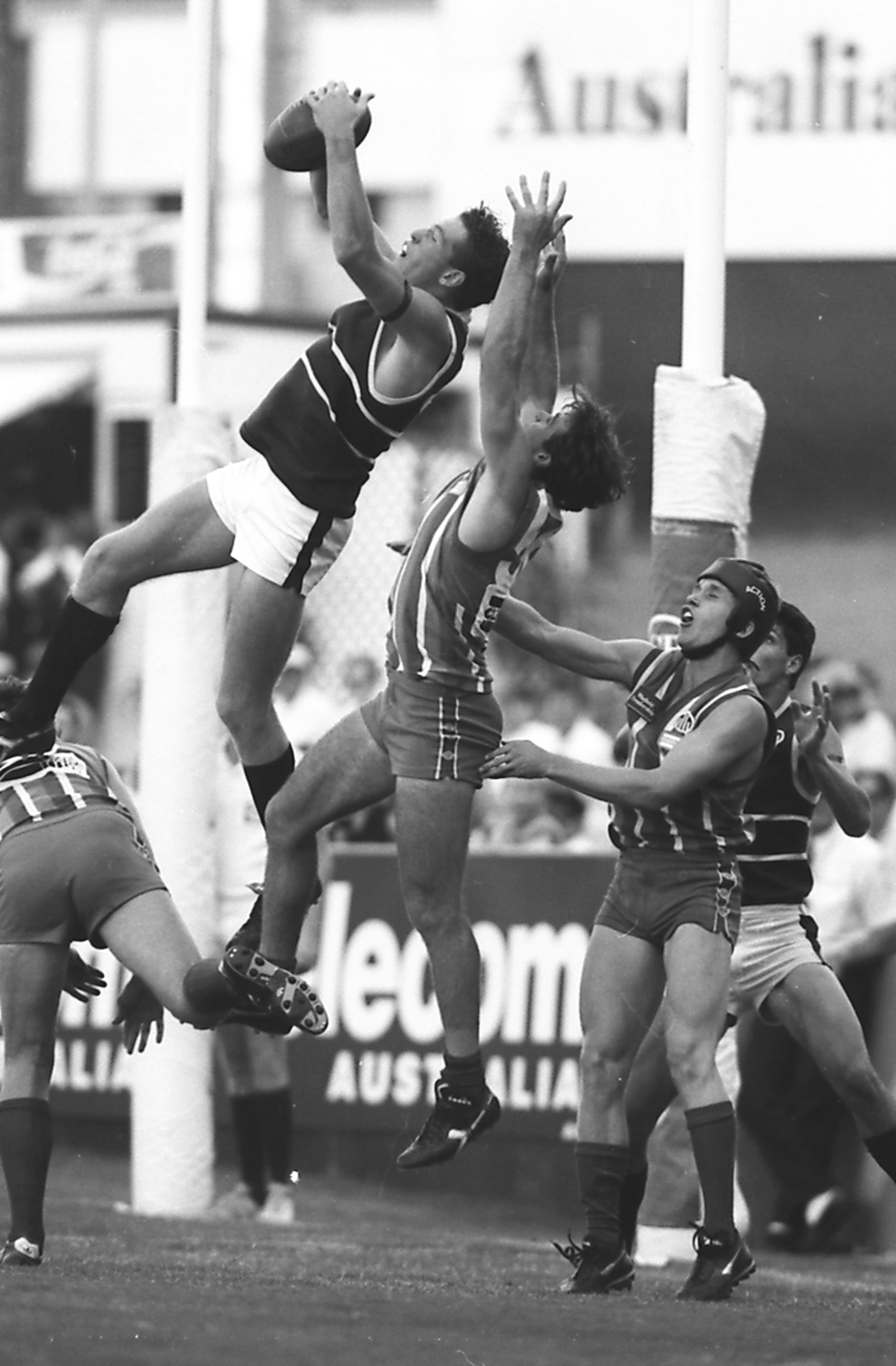 #11  Mark Jackson
Jacko played one game for Kedron FC and drew a crowd of 4000. He made a bit of a mockery of the game against Windsor Zillmere, but it was showtime from the siren. 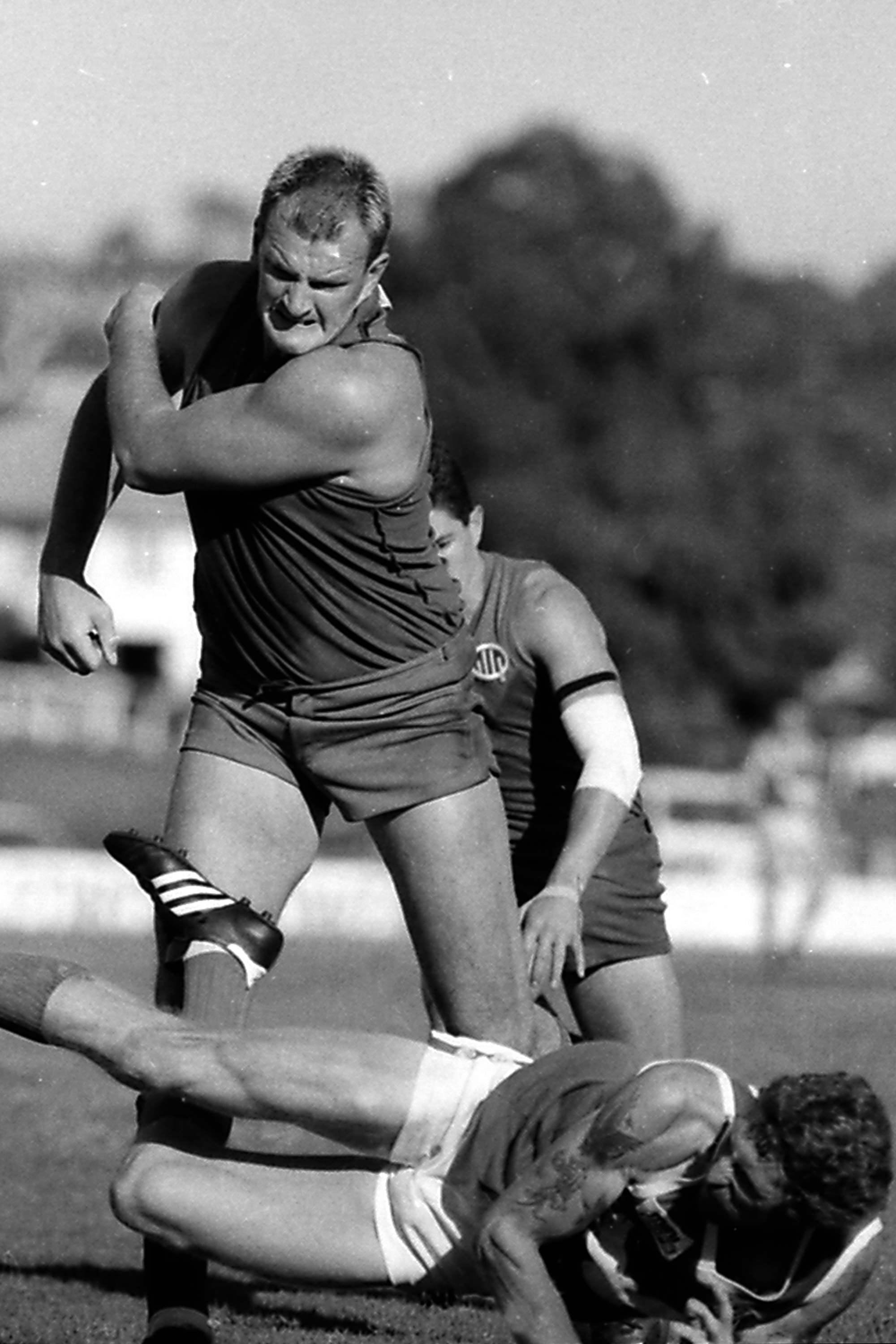 It looks like he is getting his backside kicked. I photograph footy on single shot, not motor drive so it was a fluke to jag this one. It was judged the best amateur shot in Australia and I was given $1000 in prizemoney. Somebody tore it out of the Footy record, sent it to “Hey Hey its Saturday” and won the overall competition and won $5000 in prizes. 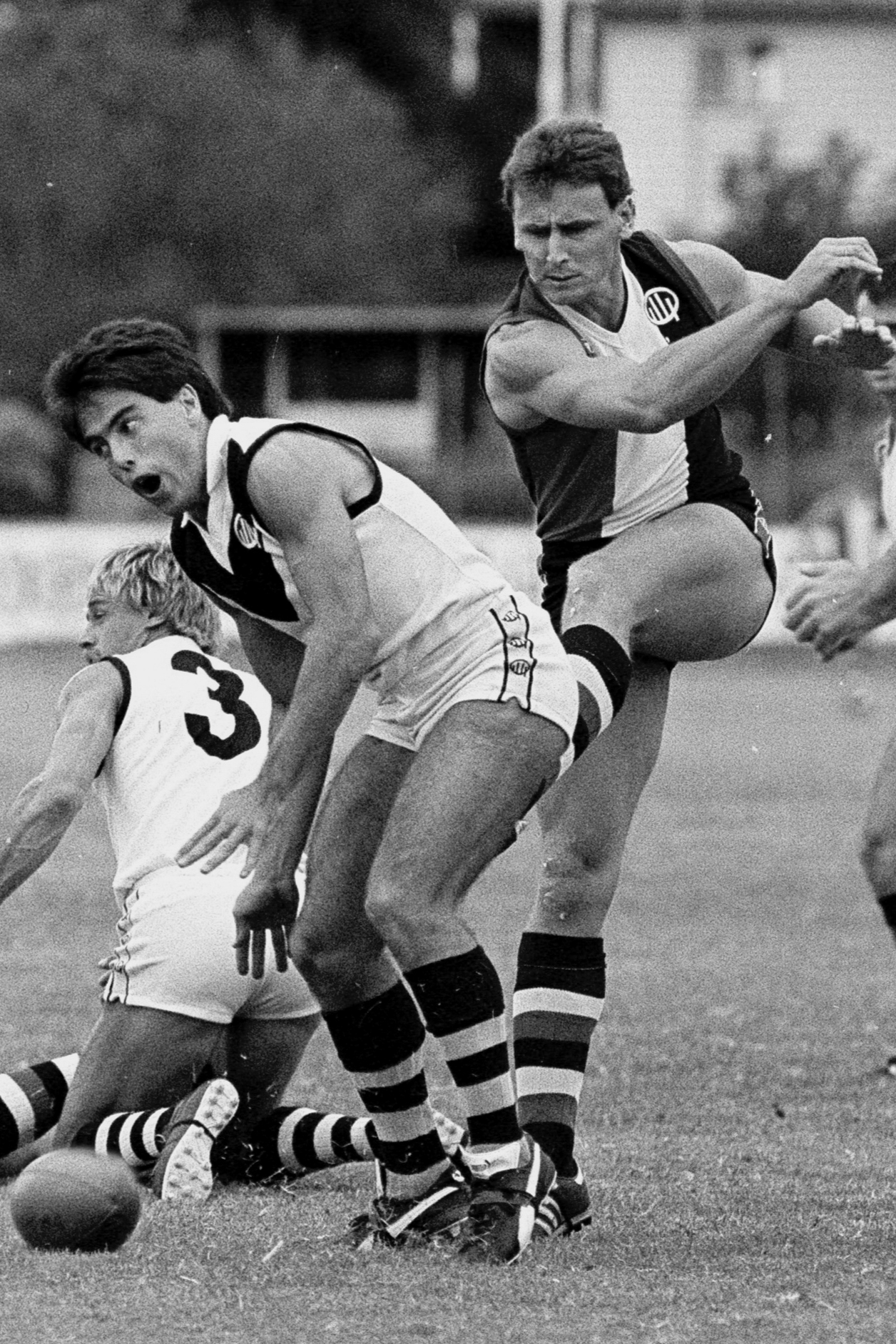 Guildford was the games record holder, with 333 games, for the QAFL, all for Wilston Grange. He made the most appearances for Queensland as well. I put Syd in just because of the legend he was.

# 8 Jason Dunstall
Jason was playing for Queensland, when Alan Jeans came up to have a look at him. This was a Queensland game. What I loved about him was how calm he was. He would spit on his hands, grab the ball and go back and take his kick. That was always cool to watch.

We had so many big name Victorians come up to play in Queensland. He was a dream. He came up, embraced the Queensland side, and led them unbelievably. He was such a big man, so to see him do what he did on the footy field was amazing, and a pleasure to shoot. Anything he could do for football in Brisbane, he did it. 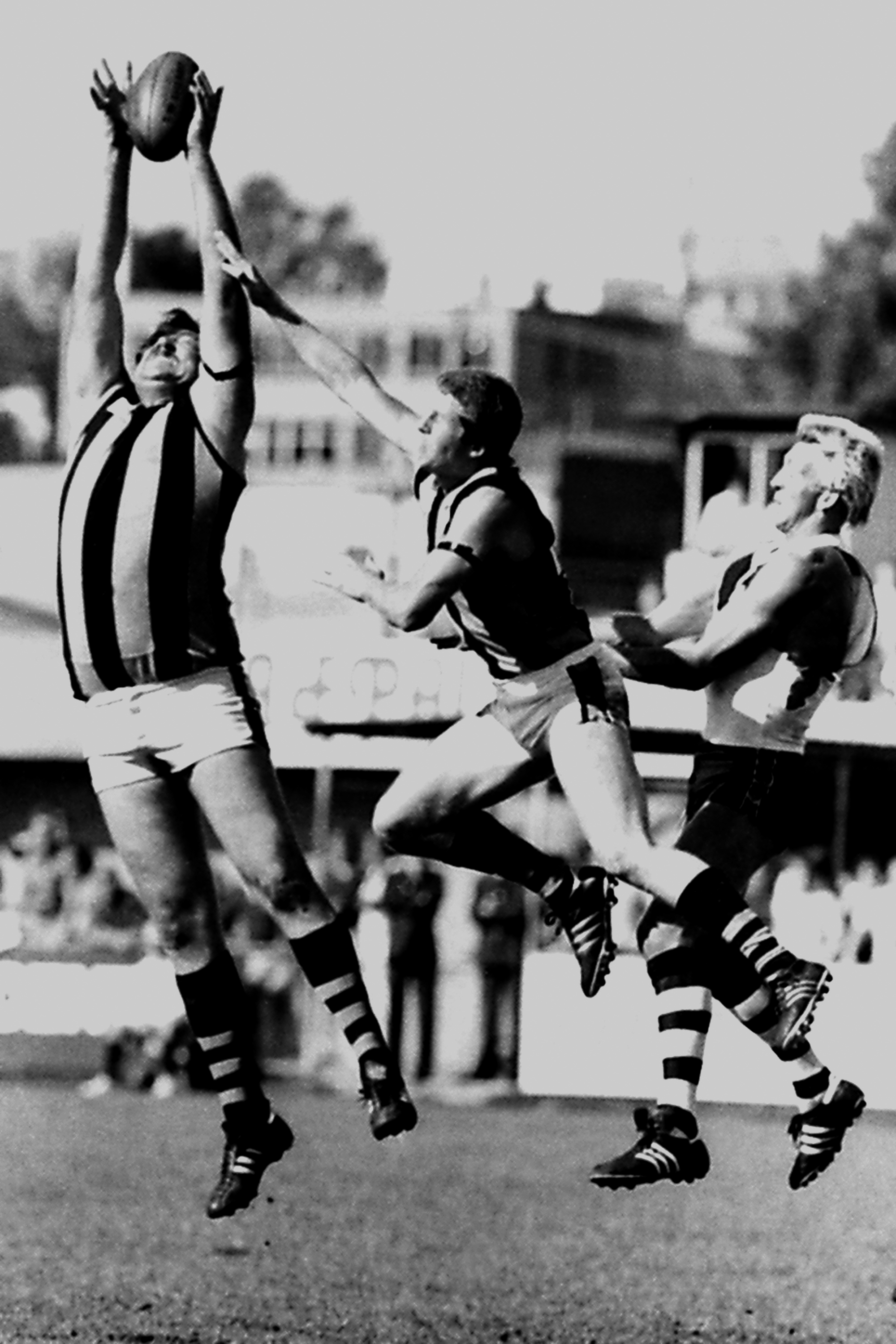 #6 Garry Wagner
This photo was in 1969. It was against Wilston Grange at the Gabba, in a prelim final. Gary was a very light weight player. I never saw him leap like that much. This all happened so quickly. Now his two grandsons, Corey and Josh, play in the AFL. 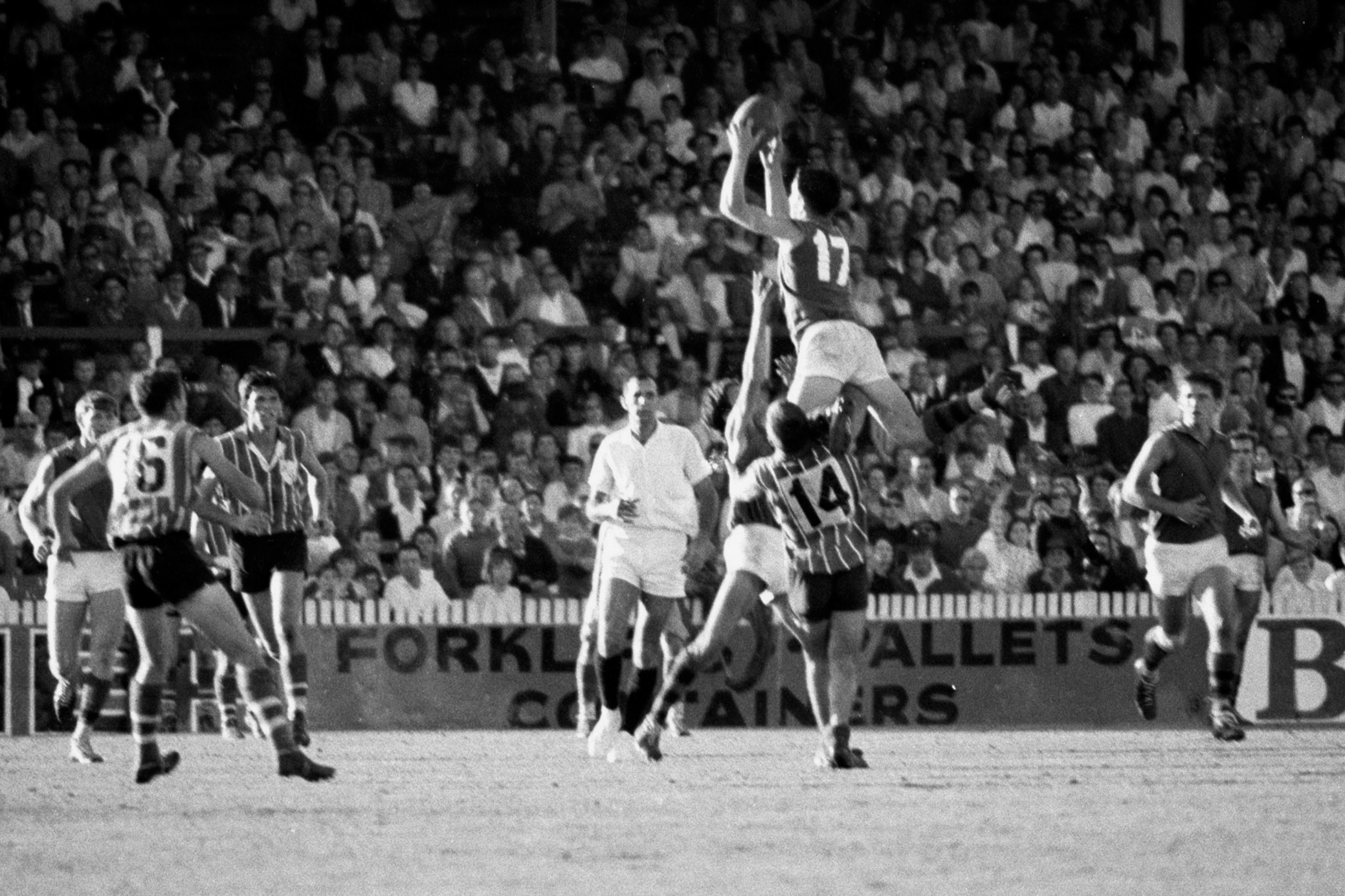 He won a Grogan medal that year. He was the centre half back for Sandgate, wouldn’t have been over six foot, but just a heart like Pharlap. The bloke he was choking in this photo, was John Noreiks, he was a serial pest. He kept having a crack at Smithy, and finally Smithy cracked, which was very unlike him. His build came from holding up house frames. The person in front of me asked if I had got the photo, because it was his boss. 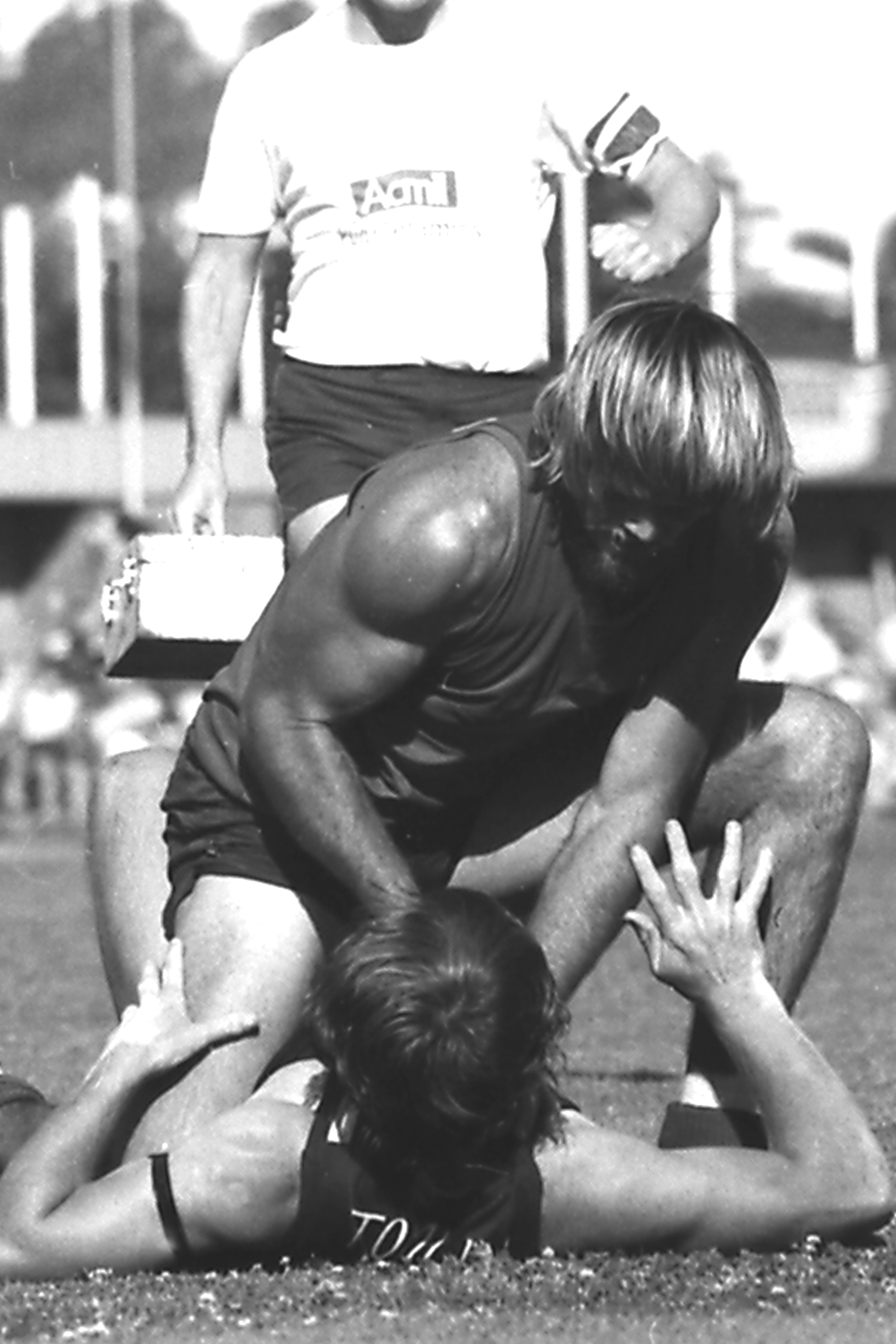 Because I’m a bit of a one shot wonder I call myself, I growing up photographing with single shot, I would always hang off until the player hit the zenneth. That mark happened right in front of me. He was about 5 foot 10, and the bloke in front was 6.6. He took a lot of good marks like that apparently. It was a great leap. 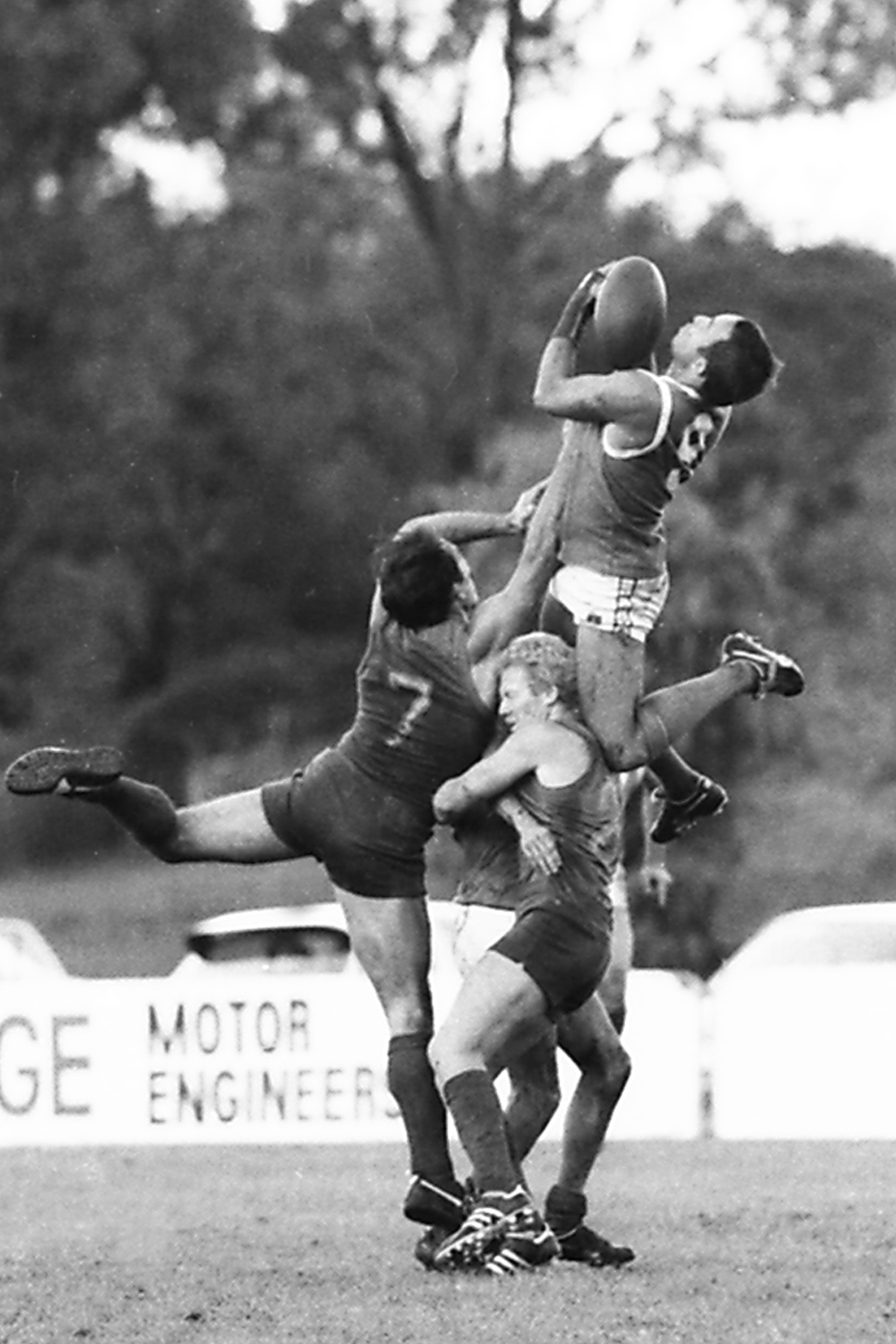 QWAFL Round 11 Preview
Friday Forecast: Round 14