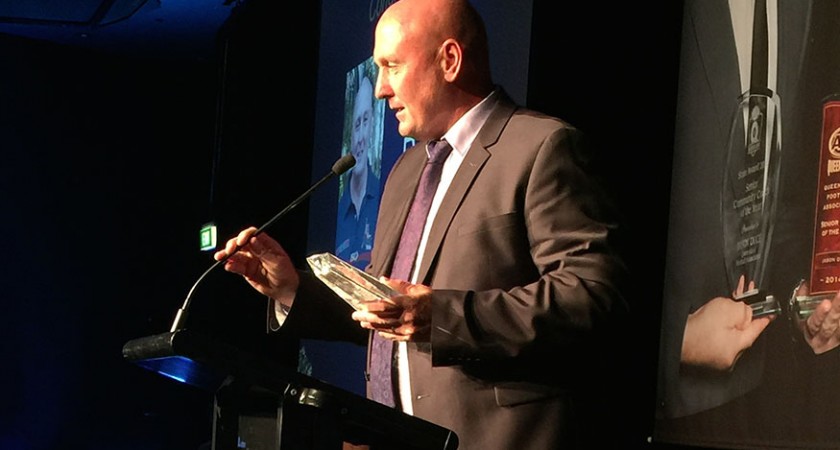 National Volunteer Week (NVW) is an annual celebration to acknowledge the generous contribution of our nation’s volunteers. With the theme Give Happy, Live Happy, introduced in 2015, we continue in 2016 to celebrate and explore the research that shows volunteers live happier and healthier lives.

To help celebrate, AFL Queensland will share stories throughout the week of our 2015 Volunteer Award winners.

Noosa’s Rob Purves was named AFL Queensland Volunteer of the Year at the Queensland Football Awards in September.

Purves received a standing ovation from the 400-plus audience for his outstanding service; and deservedly so.

But while charity begins at home for Purves, it certainly doesn’t end there.

Early this year Purves reached out to a nearby club that was struggling with numbers to organize a player interchange between the two.

On any given week the Tigers would lend between one and 12 players to their neighbour, ensuring the club still fielded a senior team and the competition had four competing clubs.

Purves was the also the driving force behind a unique program that saw Noosa partner with community organisation Sunshine Butterflies to allow children and adults with high-level intellectual disabilities to play footy.

The program culminated in a half-time match during the seniors Round 18 game that was cheered on by both clubs.

A humble Purves said a love of the game fuelled his passion for helping others.

“I love seeing the joy on other people’s faces when they do it,” he said.

“You don’t do these things for the awards like this; you do it to give back to footy. We all played the game, so you like helping the other people out so that can play it as well, but last night was really nice, I was honoured,” he said.

And that standing ovation?

“I was pretty humbled; I thought to myself wow, that’s a really big thing to do. It was a very honourable thing to do from everyone in the room. I was very taken aback by it, and didn’t really know what to do,” said Purves.

“I love footy; I couldn’t imagine life without it. We got knocked out of the finals last week, and you just roll into the next year; you go on the recruiting trail and everything like that. It doesn’t stop, but when you enjoy it, it keeps you going.”

About the AFL Queensland State Volunteer of the Year Award

Throughout 2015 AFL Queensland has called for nominations for the various volunteering roles within our game.

These nominations were then referred back to the regions and leagues to choose their local winner.

The AFL Queensland selection committee then had the difficult task of working through the regional award winners to determine the 2015 State Volunteer of the Year.

2015 State Volunteer of the Year is recognised with a trip of a lifetime to the 2015 Toyota AFL Grand Final.