Rising stars to take on Morningside 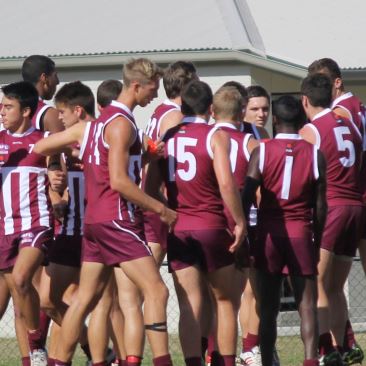 The Queensland state colours will get have their first 2014 outing on Saturday, as a squad of 25 takes on QAFL side, Morningside.

The players, selected from last weekend’s Brisbane Lions Academy v Gold Coast Academy match, will don the Queensland jumper against the Panthers, at Yeronga on Saturday to test themselves against senior bodies.

A test is certainly what they will get, with Morningside likely to name close to a full strength side, only four weeks out from the start of their QAFL season.

AFL Queensland Academy and High Performance Coach, Adrian Fletcher, said the match would give coaching staff a chance to see how the team composition will work and give players an opportunity to prove themselves in different positions.

“We want to see how individuals can play in certain places and see if we have the balance right,” he said.

“We want to test them against bigger bodies.”

Twenty-eight players were selected to train as a team in the lead-up to the match, and Fletcher said he was impressed with what he saw on the track.

“We did some game sense and some contested drills and the boys went really well.”

With Fletcher working closely with the Academies over the summer, he said the players would be able to understand their roles easily come Saturday.

“We’ve had a chance to go to the SUNS and Lions Academies and implement an overall plan and bring that together,” he said.

“That gives the boys the best chance of succeeding.”

While they will be wearing the state jumpers, Fletcher said there was still a fair way to go before the final Queensland squad of 30 is finalised at the end of March.

“Every game in the Queensland jumper should be a special occasion and it gives these players an opportunity to understand the expectations and what it means to be a part of this team.

“We want to be fair to everybody and they’ve got to earn it.”

The Brisbane Lions and Gold Coast SUNS Academy will play at Southport on March 15, before the Queensland squad is named late in the month.

Level 1 Coaching Course
Pullinger to debut at Festival of Football