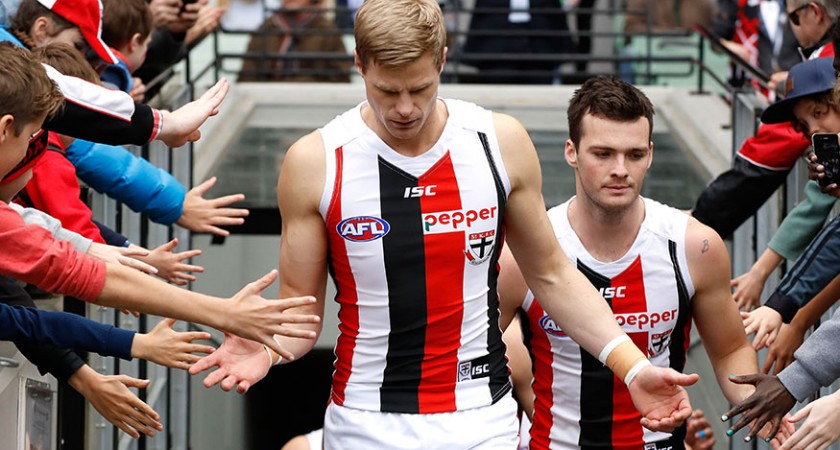 The AFL coaches have collectively voted St.Kilda captain Nick Riewoldt as the best-performed Queenslander in the AFL in 2016. Easily.

Using votes in the AFL Coach’s Association Player of the Year Award as a guide, Riewoldt is a clear standout from Brisbane vice-captain Dayne Zorko and St.Kilda teammates Tom Hickey and David Armitage.

Riewoldt polled 47 votes under the system whereby each coach awarded votes on a 5-4-3-2-1 basis for each match his club is involved in.

Riewoldt also received 10 votes – or the maximum five from each coach – in the Round 6 clash with Melbourne, when he had 24 possessions and kicked three goals.

Hickey grabbed the only other 10-vote haul when he had a career-high 21 possessions and 27 hit-outs against All-Australian ruckman elect Max Gawn and Melbourne in Round 17.

Riewoldt’s domination of the AFLCA voting was also reflected in AFL Team of the Week selections, as made by members of the team at the AFL website. He was selected six times.

Tippett, injured early in Round 12 and sidelined until Round 22, also was included six times in a brilliant first half of the season.

Armitage was picked twice along with Sydney surprise packet Aliir Aliir, who debuted in Round 6 and also played Round 13 before winning what was to become a regular spot in Round 16.

Dixon, Zac Smith, Hickey and Zorko were included in the Team of the Week once each.