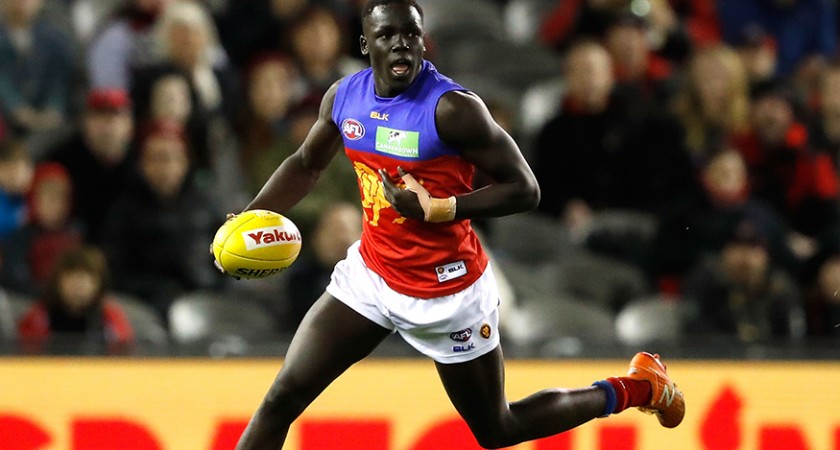 Young Brisbane Lions footballer Reuben William and his family are the focus of the second of a series of three short films celebrating cultural diversity in Australian Football.

The William family is of South Sudanese heritage and migrated to Australia from Kenya as refugees in 2003. Reuben’s mother, Veronica, said her son became curious about AFL immediately after seeing the game played on television. Soon after, at age five, Reuben and his younger brother Isaac joined the Zillmere Football Club in Brisbane’s north.

Veronica said it was the Zillmere Football Club that made the William family feel a sense of community in Australia.

“When we came to Australia in 2003 they saw footy on TV and that is where the game began for them. So I took them to Under-8s at Zillmere Football Club. It’s a very good club and a very good community,” Veronica said.

Reuben quickly impressed at Zillmere but he was a late bloomer on the national scene. It wasn’t until 2014 that he pulled on the maroon jumper, representing Queensland at the AFL National Diversity Championships in Coffs Harbour.

In that same year, Reuben was picked as a bottom age player in the Queensland State Academy and his journey with the Brisbane Lions Academy began.

His rapid progression saw him gain attention on the national stage before being drafted to the Brisbane Lions as a rookie in the 2015 NAB AFL Rookie Draft.

Amie Batalibasi said the central theme to this film is dreams.

“The thing that struck me about Reuben is how dedicated he is to the sport of AFL and that he started playing at such a young age. It was a pleasure to meet him and his family for this film as they so generously shared their stories, Ms Batalibasi said.

“It is clear that ambition and drive is something that runs in the family with Reuben’s brothers also having aspirations to play footy too,” she said.

“Reuben is an example of someone who, in the process of embracing his new country, has embraced our game. He has chosen AFL as the vehicle to demonstrate his dedication and aspirations for excellence,” Ms Hosch said.

“What we see in this film is a young man who has a love for the game, who is excelling at the game and is doing this with the full support of his family and his local football community. In return, Reuben is an inspiration to us all.

“Like many young Australians, as a teenager, Reuben’s hopes and dreams centered around playing AFL. His hard work and determination has led him on a path to success and he is now seen as a role model for others.

“As we lead into this week’s NAB AFL Draft, Reuben’s story stands as a reminder to celebrate the many journeys the newly drafted players have been on to reach the elite level of Australian Football,” she said.

The three part series has been produced as a joint project between the AFL and Australia Post, the AFL’s official community inclusion partner, to highlight the cultural diversity within Australian Football from grassroots to the elite game.

The first film in the series was released during the 2016 Toyota AFL Multicultural Round and focused on young Melbourne footballer Asma Kassem and her Yemeni family. The 11-year old Asma’s connection to Australian Football started through North Melbourne’s The Huddle program and has continued through to junior football.

The third and final installment of the series will be released in early 2017.