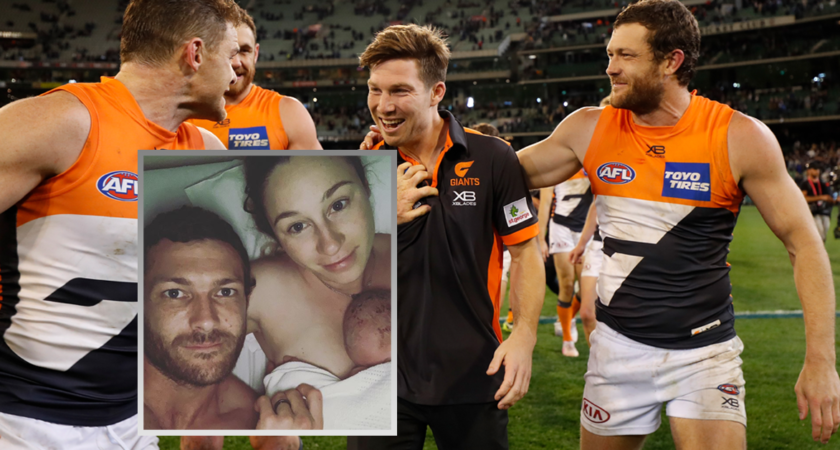 Sam Reid has been spared a double bookings of epic proportions .. an AFL grand final and the birth of his first child on the same day.

The 29-year-old Queenslander was faced with this freakish double last Saturday when the GWS GIANTS qualified for the grand final against Richmond on Saturday, when his wife Elissa was due to give berth.

The couple had already made a decision several weeks ago that Reid would play regardless of when the baby was born, but through the first three weeks of the finals he had lived with the possible scenario of missing his first child’s birth.

Reid was spared the anguish of taking the double booking into Grand Final week when Elissa gave birth to a healthy baby boy  Elijah in the early hours of Monday morning.

Reid has had a back-up play in place right through the finals as the GIANTS beat the Western Bulldogs in Sydney, Brisbane at the Gabba and last Saturday Collingwood at the MCG in one of the biggest preliminary final boilovers in history.

Whenever he has had to be away from home through this month he has arranged for one of his wife’s friends from Melbourne to be with her and play nurse.

But still he was mighty relieved when the baby arrived ahead of time.

His Instagram feed told the story nicely. On Sunday night he posted a photo of Elissa, an osteopath, giving him treatment. The next photo not long after showed the proud father with Elijah nestled on his chest.

He was given the day off training on Monday, and wrote on Instagram: “What a start it was to what is going to be an amazing week ….. (Elissa) has delivered the most gorgeous little boy this morning at 3.38am and did it all natural as planned. My heart could not get any fuller for these two”,

This isn’t the first time a pending birth has clashed with an AFL final.

In 2000 Brisbane’s Daniel Bradshaw abandoned a semi-final against Carlton in Melbourne in 2000 when his wife Angie went into labour with their first child the night before the game.

But there was never any chance of Reid missing the grand final. Not after the extraordinary journey he has taken to get there.

It is not new. It has been told here before. But it is worth recounting here.

With his career seemingly going nowhere he was enticed to follow Dogs teammate and later to be GIANTS co-captain Callum Ward to Sydney for the new club’s entry to the AFL in 2012.

As was so cruelly said at the time, he was the ‘steak knives’ in the Ward deal, and yet he will play in the Grand Final while Ward, having done his knee early in the season, will watch from the sidelines.

Reid played 14 games in two years – five in 2013 and nine in 2014 – but with his body failing and the Giants overloaded with younger talent he retired.

He spent two years as captain of the Giants NEAFL side while working at the club as a development coach.

Such was his form at the secondary level at that end of 2015, and so much better was bid body, Giants coach Leon Cameron offered him a chance to try again at AFL. And the rest, as they say, is history.

He played only six games in his comeback year in 2016 and 13 in 2017, but since then has been pretty much a fixture in the AFL side, playing 21 of a possible 24 games last year, including two finals, and has played all 25 games this year.

And, having worn jumper #26 and jumper #11 at the Bulldogs and jumper #23 in his first two years with GWS, he has created a little slice of history for himself since switching to jumper #50 for his comeback.

Only once has jumper #50 been worn in a grand final – that was Turnbull in West Coast’s 1994 grand final win over Geelong. It was his 34th game.

Only three other players have worn a jumper number above 50 in a Grand Final.

In 1991 West Coast’s Ashley McIntosh wore #53 in a losing grand final against Hawthorn. It was 17th game at the end of his first season before he switched to #11 the following year for a further 231 games.