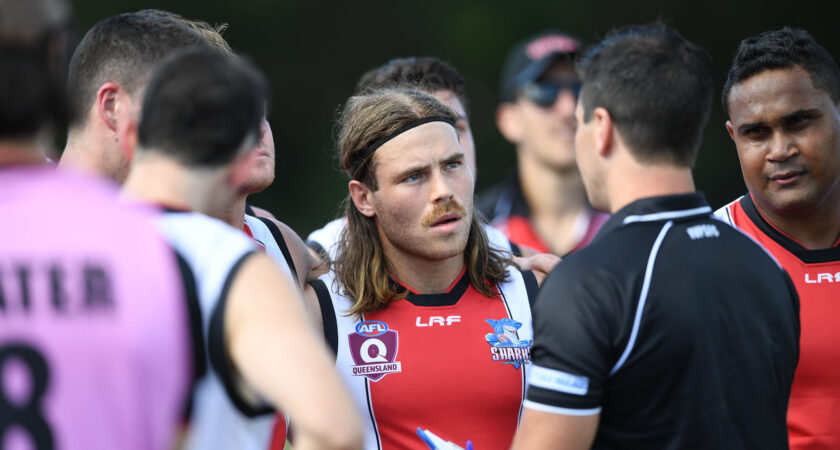 The Sharks will be eager to make an impression when they host Surfers Paradise in their opening match of the season this Saturday at 2pm before travelling to Cooke-Murphy Oval to play Labrador the following round.

The club will recognise its history throughout the year by wearing guernseys based on designs from yesteryear.

At the helm is new Senior Coach Phil Carse, who is no stranger to the community having played 163 games for the Redland Bombers and nine games with the Sharks, including the 2020 QFA Division 2 South Grand Final.

In 2019 Carse coached the Redland Bombers in the NEAFL competition.

“I have a long history with this club dating back to 2007, it feels like home to me,” he said.

“I’m honoured to lead the club into a new era, and I can’t wait to see what we can achieve as a unified club.”

“Adam ticks a lot of boxes for us,” he said.

“He has a fantastic footy mind and to get him back from Mt Gravatt has been huge for the club.”

“We have leaned on him in terms of a game plan and strategy for the season ahead.”

Scott Miller and Mitch Stallard have been appointed as Co-Captains for this season while Liam Eadie, the former Captain of the Victoria Point Sharks, was voted in as Vice-Captain.

“As a club, we couldn’t be happier to have Scott and Mitch as our Captains and Liam Eadie as our Vice Captain,” said Carse.

“I’m really proud of the way Scott, Mitch and Liam all go about it both on and off the field and as a group, we want to see more players follow in their lead as the season progresses.”

New faces at the club include Matt Hambelton, a forward from Canberra Demons along with Jacob Murphy, from Rocherlea Tigers in Tasmania.

“Both players are pressure forwards and have been standout’s during our practice matches creating a host of scoring opportunities,” said Carse.

On the players departed front, the Sharks have fared reasonably well with Hayden Bertoli – Simmonds, Rueben Williams and Matt Mugavin joining the VFL.

The Sharks head into the 2021 season with confidence after two practice matches against Sherwood and Wilston Grange.

“We’ve been happy as a coaching group with the development of our players over the summer,” said Carse.

“There are a lot of unknows this year, we will continue to adjust and learn as the season unfolds.”

“We didn’t get to play many games at home last year due to COVID-19, so we’re looking forward to our first QAFL game in a better part of a decade.”

“It will be great to create a little history and hopefully we can get big crowd at Totally Workwear Park to kick us off”.