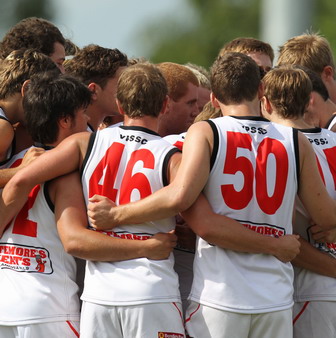 Phil Carse turned Superman as the Redland Bombers enjoyed an unforgettable moment that was 238 matches in the making at Victoria Point yesterday.

The popular Bombers skipper was best afield as his side over-ran a grossly undermanned Gold Coast Suns Reserves 22-14 (146) to 6-11 (47) in the NEAFL Northern Conference elimination final.

It was a very public contribution from the five-year captain, three-time B&F winner, Hall of Fame member and Team of the Decade (2000-09) captain, who on the occasion of his 100th game in Round 9 was described as “the heart and soul of the club”.

But just as prominent was the behind-the-scenes contribution from Carse’s Clark Kent-type ultra ego – that of the Redland Club Development Manager who was charged with the responsibility of putting on the day.

He did that in magnificent fashion too as more than 1500 people, including politicians, sponsors, supporters and local junior players packed the Victoria Point ground for a day that the club which had joined the State League in 2000 will never forget.

It was a wonderful celebration of their first State League finals victory after three previous finals outings had ended in disappointment.

In 2001, when they finished the home-and-away season fifth, Redland lost to Broadbeach in the elimination final. And in 2009, after they finished third in the regular season, they went out in straight sets at the hands of Southport in the qualifying final and Mt.Gravatt in the knockout semi-final.

It didn’t take long before it was evident that it would be fourth time lucky.

The Bombers, facing a Suns outfit which included just eight listed players after Josh Toy’s late call-up to the AFL side to play Carlton on Saturday night, were in complete control from the outset.

They led by 24 points at quarter-time, and stretched their advantage to 39 points at halftime and 63 points at three-quarter time before falling one point short of what would have been their first 100-point win of the season.

Coach Greg Seton-Lonsdale couldn’t have been happier with events on and off the field.

“It was a fantastic day for the club … one for the history books,” he said.

“I don’t know all the details of what Carsey did to promote the game, but the local support was unbelievable. You could hardly move, and there were a lot of people I’ve never seen before.

“It meant a lot to a lot of people and the players really appreciated it. They were determined not to let anyone down.”

They didn’t. In fact Seton-Lonsdale rated their effort close to their first four-quarter performance of the year.

“It wasn’t quite four quarters because we were a bit flat for a period in the third quarter but we still kicked seven goals,” Seton-Lonsdale said.

“You never expect to win a final by a margin like that, but our pressure in the contest and our hard running was fantastic. It’s what got the job down.”

But it wasn’t all smooth sailing.

First, Seton-Lonsdale had to tell Matt Sondergeld, who had played 17 of 18 home-and-away games, that he wasn’t about to risk the suspect hamstring he twinged in Darwin eight days earlier.

“He (Sondergeld) did everything he could and he wanted to play but in the end I had to make a hard call … hamstrings don’t come good in a week and in the end I decided to take the safety-first option. But he’ll be OK next week.”

The coach also had to leave out Ethan Kelly, Jack McDonald and Dominic Stout-Milkins from his final line-up to make way for the return of leading goal-kicker Josh Pullman and midfielders Damien Steven, Blake Grewar and Luke Rogerson after they missed the Round 21 trip to the NT capital due to injury.

Then, the Bombers’ pre-game routine was disrupted when the Reserves curtain-raiser between Labrador and Broadbeach went longer than was anticipated. They had to forgo their customary on-ground warm-up for a similar session down on the bottom oval.

It wasn’t ideal at a time when they were looking to do absolutely everything right, but it was about the last thing that went wrong as they booked a knock-out semi-final clash with Southport at Fankhauser Reserve next Sunday.

The Bombers had nine different goal-kickers as they inflicted the Suns’ biggest loss of the season, headed by no less than six players who each kicked three goals.

It wasn’t unusual or unexpected for Pullman or his key forward partner Scott Clouston to bag a hat-trick, but for Carse, Daniel Dzufer, Tom Salter and Rogerson three goals was a season high.

“That was one of the really good features – we didn’t rely on Pully (Pullman) or Scotty (Clouston) to kick a bag. And Stevo (Damien Steven), who normally never misses, kicked 1-3,” said a well-satisfied Seton-Lonsdale.

That Dzufer kicked two of his three goals when playing in defence and centre half back Adam Oxley also kicked a pair indicated just how much the Bombers ran and how effective it was.

On a day when Seton-Lonsdale found it difficult to individualise because the Bombers had so many good contributors he had no problem identifying Carse as best afield.

“He was super … he had 40-plus possessions and his work-rate was just incredible,” the coach said of his on-field lieutenant.

Oxley, such an improved player this year, continued his outstanding end to the season with one of his very best games for the club, while Steven returned from a two-week injury lay-off without missing a beat.

Clouston, doing his utmost to earn an AFL recall at the end of the season, was a standout yet again, and according to Seton-Lonsdale, did a lot of “team stuff” in addition to his gut-busting running and powerful aerial work.

Salter provided a mountain of run off the wing and Dzufer likewise at half back until he was thrown forward in the fourth quarter.

Brad Howard and Sam Godfrey were also damaging at half back, Jason Paxman worked hard in the ruck, and Blake Passfield was another good contributor until medical staff opted to ice a foot which had been stomped on in the third term.

It was enough for Seton-Lonsdale to look forward optimistically to a clash with a Southport side he’d seen get over-run in the final quarter by the Brisbane Lions Reserves at Coorparoo on Saturday.

“We’re really looking forward to it … we’re in good form at the right time of the year and it’s a challenge we’ve got to grab and have a real crack at,” he said.

With a clean bill of health from the elimination final, Sondergeld is certainly expected to return to take on the Sharks, and Kelly’s height is likely to make him a contender as Seton-Lonsdale looks to combat the tall Southport forward line.

For the Suns it was a repeat of their disappointing end to last year, when they finished third at the end of the home-and-away season before losing by 66 points to Mt.Gravatt and 75 points to Morningside in the finals.

Coach Shaun Hart admitted his side, which included only eight listed players and 15 top-ups, was “murdered in most areas of the game”.

“We over-handled the ball instead of getting it forward, and our efficiency rate was horrible,” said Hart, keen not to be seen to be detracting from the quality of the Redland performance.

“Their tackling pressure and defensive work was very good – they were very good,” he said.

Hart seemed almost embarrassed and uncomfortable that his side, decimated by injuries, had performed so poorly in the finals after taking fifth spot on percentage from Labrador and finishing half a game clear of Broadbeach.

For the second year in a row the AFL club had finished fifth, having lost their last four games after losing four of their last five last year.

But Seton-Lonsdale was quick to reject any sort of suggestions that the Suns hadn’t earned their spot and shouldn’t have been playing in the finals.

“They were there because they won enough games in the first half of the year. You can’t control injuries and next year they could have a good run with injuries and be much tougher.

“The Lions finished bottom last year and look where they are now … that’s just football.”

And eight became seven when Brennan was forced off with an ankle problem in the third quarter after being among his side’s better players to that point.

Foe the second week in a row Hart had been forced to make 14 selection changes as Caleb Hay, a 2011 Queensland U16 representative from the Northern Rivers of NSW, became the 48th different top-up player and the 86th different player to wear Suns colors in 19 games in the NEAFL this year.

Hart nominated Labrador top-ups Jermaine Wardle and Damien Dewis as his side’s best in what was a monumental mis-match against a Redland side that put behind it an inconsequential 78-point loss to the NT Thunder in Darwin a week earlier.

“I really liked their games across half back and in the back pocket … Wardle even played on Pullman for a while and did a really good job,” the coach said.

Jolly (two goals) and Iles won plenty of ball through the midfield, Josh Fraser worked hard in the ruck, and Broadbeach top-up Andrew Boston was best of the rest after starting on the wing and being thrust into the midfield.

Fraser, former No.1 draft pick and Collingwood veteran, was clapped from the ground after what will be his last senior game if he’s not given a farewell AFL outing in the Suns’ last game of the season next weekend.

In a campaign in which no Suns player played every NEAFL game, Fraser and Jacob Gilbee topped the list with 17 of a possible 19, followed by Josh Hall and Alik Magin (16), Tom Nicholls and Schade (15), and Piers Flanagan, McQualter, Jolly and Toy (14).