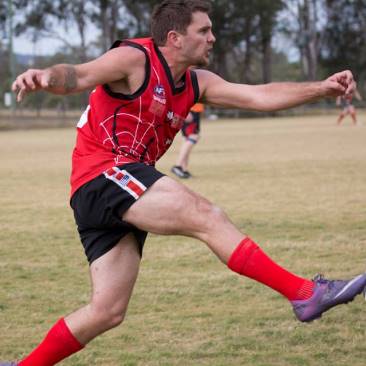 The Jimboomba Redbacks are going blue this weekend, to raise money for prostate cancer.

Both the QAFA (B) seniors and the club’s Over-35 masters side will play on the day, among a number of other family activities.

Redbacks coaching co-ordinator, Stuart Greig, said the event would hopefully continue to increase dialogue around prostate cancer, after one of their players lost a close relative.

“We wanted to do something for charity but not sure which one,” he said.

“Being in a male-dominated sport, we thought it was a good opportunity to increase the awareness of prostate cancer, which affects so many men.”

The players will auction their jerseys off after the match, with all the funds going to the Prostate Cancer Foundation of Australia.

Greig said the local community had really thrown its support behind the event, with local businesses donating raffle prizes for the afternoon.

The match will also bring together some Redbacks premiership players, as the 10th anniversary of the club’s flag.

Greig said he hoped the day would turn into an annual event.

The QAFA (B) match kicks off at 1pm, with the Over-25 Masters team playing at 3pm.