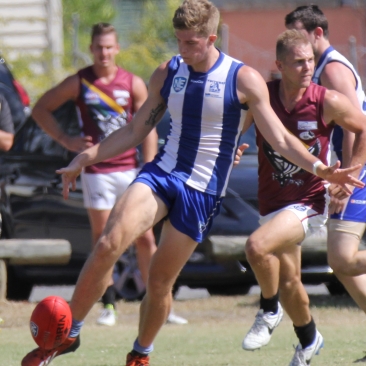 Mt. Gravatt’s Jayden Crawley has bounced back from an injury-marred 2013 to nab the Round 2 Syd Guildford Trophy nomination.

The 20 year-old was pleasantly surprised to hear the news.

“It feels good and I’m grateful for the honour”, he said.

“I’ll have to get around the boys and might even go out to celebrate on the long weekend”, he said.

The injury required a painful bone graft, but what was even more painful was watching his teammates play from the sidelines, Crawley said.

“It was pretty boring to be honest, just sitting out”, he laughed.

Now he’s back and everyone who has come across him on the footy field knows it.

Crawley had an absolute blinder on Sunday against the Surfers Paradise Demons, cutting off their forward plays like his life depended on it.

“I played consistently and held my own I think”, he said.

Crawley had to be aware at all times as a centre-half back in order to stop the pressures of Surfers Paradise and win the ball back into friendly hands.

“He was our greatest player on the weekend to be honest. He took great marks and read the play really well,” Pollock said.

“He spoiled a lot of Surfers’ plays and he made it difficult for Surfers to get past him”, Pollock said.

Pollock has high hopes for Crawley’s future in Aussie Rules.

“I think potentially if he has a solid year, there’s no reason he can’t jump into the NEAFL if he so chooses,” Pollock said.

“He’s one of those guys who’s got a lot of determination, which is just one of his many strengths.”

Crawley does want to take his footy to the next level.

“I want to play in the NEAFL and then hopefully the AFL”, he said.