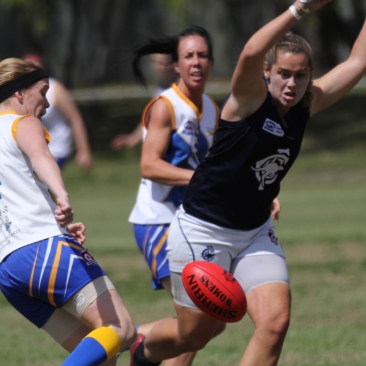 This time last year, they came in as underdogs against powerhouse side, Yeronga, without a win over the Devils in any of their earlier clashes through the year, before snatching a last-gasp upset in the grand final.

This season, the Navy Roos have been the hunted and the side has coped with that tag well, losing only one game through the home and away season and winning straight through to the flag decider with an opening finals victory over Zillmere.

Coorparoo coach, Damien Richards, said that status didn’t faze his team as it prepared for its second consecutive grand final.

“We pretty well focus on shutting down the opposition, so we don’t really feel as though we’re the hunted,” he said.

“We know what we need to do to shut them (Zillmere) down and it’s about getting the defensive side of our game right and our offence should take care of itself.”

Rather than becoming complacent with a flag under their belts, Richards said this season had been one of immense improvement for the 2013 Women’s League premiers.

“The way we play now is a massive step up from last year, even from the grand final,”he said.

“Our ball movement has gone up a notch in the last 18 months.

“I would say we’re the most improved side in the competition.”

A big blow for Coorparoo will be the absence of gun midfielder, Sally Young, who broke her ankle in the club’s semi-final a fortnight ago, while Jenna Oxley is unavailable, replaced by Nat Curtis, who represented Tasmania earlier this season before moving up to Queensland.

Richards is not the only premiership coach in the QWAFL grand final, though, with his opponent, in Zillmere’s Jacob Simmons-Bliss.

Simmons-Bliss won a premiership with Yeronga in 2012, before moving across to the Eagles this season and he’s not claiming the underdog status, coming off an impressive preliminary final win over the Devils.

“I think the wider community might think that, but I don’t buy into that (underdog status),”he said.

“(The preliminary final) was the most comprehensive win we’ve had this season and it’s the best we’ve executed our game plan.

“We’re pleased with our progress and form into the grand final.”

The Eagles coach said they had learned a lot from their first week finals loss to the Navy Roos, who they have beaten once in three tries this year.

Simmons-Bliss said they had certainly identified some of the Navy Roos’ danger players, including QWAFL best and fairest winner, Emma Zielke and gun forwards Megan Hunt and Maddie Protheroe.

After Yeronga’s stranglehold on the grand final in recent years, Simmons-Bliss said it was good to see a different grand final combination

“It’s good to see Coorparoo take the reins this season and show there’s more depth through the competition and it’s not just the previous dominance (of Yeronga),”

The Eagles will likely go into the flag game unchanged, with two players facing fitness tests in the lead-up to the game.

QAFL and QWAFL Grand Final Day will be jam packed full of action and there’ll be plenty of coverage of it.

The BayFM Sport Show will be broadcasting LIVE from Yeronga from 8am-12pm, featuring interviews with players and key Queensland football figures..

The QAFL Grand Final will be broadcast live on ABC 612 and live streamed on the AFLQ website.

For all the info about the Grand Final day, click here: