QWAFL One to Watch Round 9: Jemma Abbott 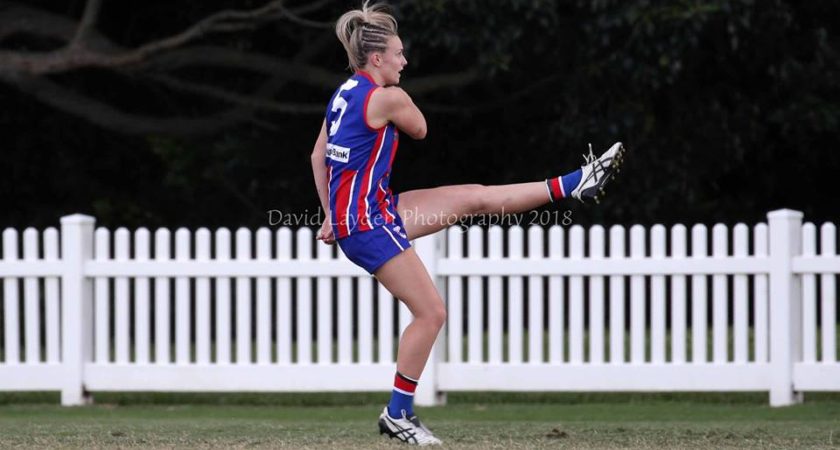 Thus far, Wilston Grange have been the absolute benchmark of the competition.

After eight rounds of fixtures, the Gorillas sit well atop the Bond University QWAFL standings, with three wins separating them and second placed Coorparoo – who they also beat convincingly last weekend.

Their success this season has come via a multitude of reasons, each ensuring Wilston Grange remain perched at the pinnacle of the QWAFL.

Of course, there are the plethora of AFL Women’s stars across each line of the team.

Current Brisbane Lions and North Melbourne AFLW players Kate Lutkins, Shannon Campbell, Jamie Stanton, Tahlia Randall and Brittney Gibson have all starred for the Gorillas so far this season, each producing a number of commanding performances throughout the now seven game win streak.

But their star power lies beyond that too, where a number of emerging talent have taken another step in their development in their respective careers – and that is were the One to Watch for Round 9 can be found.

Jemma Abbott has featured in five of the seven games for the Gorillas so far this season, juggling QWAFL and Under-18 state representative commitments.

Last week, Abbott, 19, was in Perth with the state side where she was one of a handful of Queensland players to hit the scoresheet against Western Australia.

But after being named as an emergency for Brisbane ahead of this weekend’s Winter Series in Sydney, in which a number of the Gorillas’ key players will be missing, Abbott will relish in a greater responsibility on the park.

The Scotland-born Abbott has found a knack for finding the goals this season, booting six goals across her five games.

On two occasions, she has been the team’s weekly highest goal scorer; an impressive feat given the side ranks a clear number one in the competition for points scored.

With a potential AFL Women’s opportunity around the corner, this is a weekend where Abbott can truly stamp her mark on the competition and earn a call up to the Lions’ Winter Series team in the coming weeks.