QWAFL One to Watch Round 16: Demi Leach 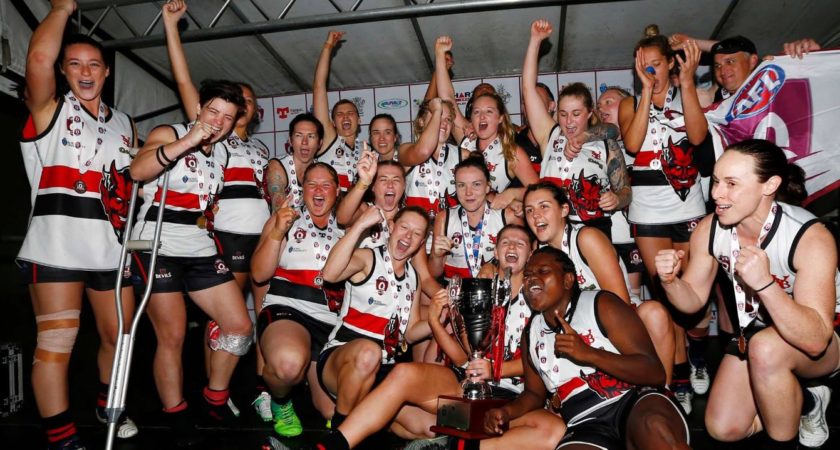 Yeronga’s 2018 campaign has transpired in stark contrast to their premiership triumph last season.

In 2017, the Devils were world-beaters, dispelling their loss to Coolangatta Tweed in the big dance a season prior to defeat arch rivals Coorparoo and win the flag.

Since then, a lot of things have changed at Leyshon Park, but similarly, many things have stayed the same.

A miniature exodus at the club played out over the offseason, with key players in the premiership win leaving for pastures new.

Select key players remained, but the changes from year to year meant Yeronga’s hand was forced to promote from within.

Several players from the club’s QWFA Division 1 side have taken up life in the QWAFL this season.

The Devils currently sit in sixth place and find themselves among a log jam alongside University of Queensland, Bond University and Coolangatta Tweed for the final two spots in the final four.

The likelihood of playing finals or not may not be entirely in their hands, but if they were to qualify, the Devils will need to find more lethality in front of goal. And that’s exactly where you can find this round’s QWAFL One to Watch.

Demi Leach has been with the Devils since 2013 in the club’s Under-18 side and has since, over her 48 club games, developed into one of the most experienced players in the team.

A versatile forward, Leach has the ability to line up at full forward or across half-forward and even float through the midfield as a skilful option out of the centre.

“In my opinion, she’s the best contested mark in the competition. As any coach will tell you, contested marks are gold,” Stephens told aflq.com.au.

“If you caught our Grand Final last year, she took a few really key marks that were probably the difference at the end of the day.”

“I really think she’s a key player in our forward line in terms of being that kind of player where we can play deep but we can also push her up the ground.”

“This year she hasn’t been in the goals as much as previous years but her work rate and her work ethic is just brilliant. She’s probably a bit unlucky not to have more goals next to her name.”

Yeronga, spearheaded by an inform Leach, will aim to keep their finals hopes alive as they face Bond University this evening, 4:45PM, at Bond University.