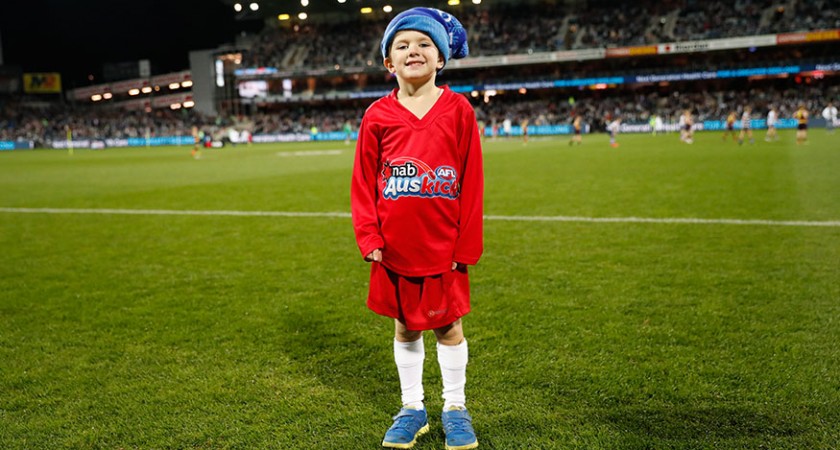 Kurt Lane from Merrimac in Queensland, became the envy of all kids last night when he was announced as the weekly nominee for the 2017 NAB AFL Auskicker of the Year competition for Round 11.

The NAB AFL Auskicker of the Year competition calls for 2017 registered participants of the program to enter for the chance to become one of 22 weekly nominees.

Kurt, who plays NAB AFL Auskick at the Broadbeach Cats Football Club, will have the once in a lifetime opportunity to present an AFL premiership player with their medal on Toyota AFL Grand Final Day.

He will join 21 other lucky NAB AFL Auskicker weekly nominees in Melbourne for an unforgettable experience that will also include walking in the parade and playing on the hallowed turf of the MCG at half-time on Grand Final Day.

It only gets better for Gold Coast SUNS fan Kurt, he now has the chance to be crowned the overall NAB AFL Auskicker of the Year which will be announced at an awards dinner in Melbourne during Grand Final Week.

The lucky 2017 NAB AFL Auskicker of the Year winner will receive $5,000 in a NAB Reward Saver Account and Geelong Football Club captain Joel Selwood as their personal footy mentor for 2018.

To join Kurt and be in the running to win this incredible experience, parents and guardians can enter their 2017 registered NAB AFL Auskick participant into the NAB AFL Auskicker of the Year competition by uploading a short video featuring their Auskicker in action at home or in the backyard; kicking goals, commentating or taking a speccy.

In the video entry, Auskickers should also explain why they think they should be the 2017 NAB AFL Auskicker of the Year.

Children will learn the fundamental motor skills vital for future physical activity and sport participation as well as learning how to interact with other children as part of a team in small group activities.

The program also provides a great opportunity for parents to interact with their kids through the activities, have the opportunity to make new friends, learn about the game and spend quality time with their children.

NAB has been supporting Auskickers since 2006, each year providing over 170,000 young kids across the country with the opportunity to learn and develop fundamental footy skills. It’s about promoting a healthy lifestyle for kids, and ensuring the ‘footy champions of tomorrow’ can realise their potential.

NAB’s commitment to growing NAB AFL Auskick extends both on and off the field. The NAB AFL Auskicker of the Year competition provides 22 lucky Auskickers with a once in a lifetime experience, whilst NAB’s various program initiatives are focused on fostering local centres around Australia.

Register to play NAB AFL Auskick in 2017 via aflauskick.com.au