Queenslander Armitage signs off with the Saints 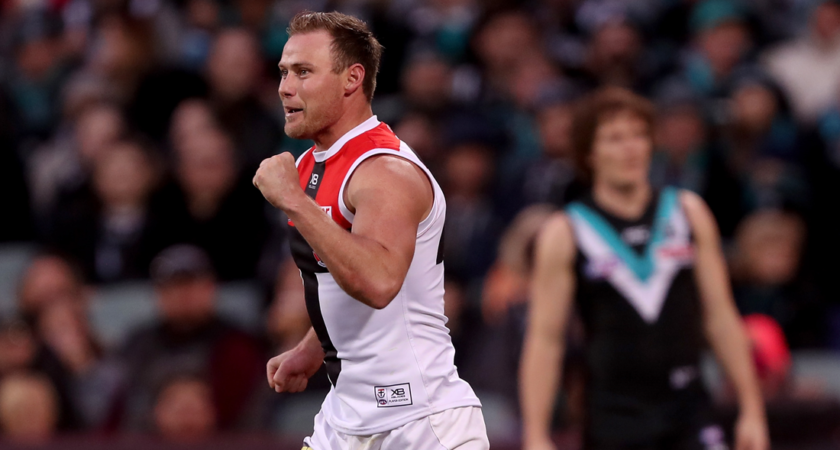 Queensland football’s extraordinary ‘Class of 2006’ is down to one following the exit of David Armitage from St Kilda today.

This will leave Gold Coast veteran Jarrod Harbrow as the last of a what was a staggering 18 Queenslanders drafted to the AFL for the first time in 2006.

Armitage told St Kilda teammates his 13-year stay at the club would end this season, and although the 31-year-old said he would be open to playing elsewhere it is almost certain his 169-game AFL career is over.

Armitage was the first Queenslander taken in the 2006 National Draft at #9 and has played 169 games, including three finals, kicked 98 goals, and polled 40 Brownlow Medal votes.

He will retire having worn the #20 jumper more often than any other St.Kilda player.

Armitage remains sidelined by concussion symptoms but will travel to Sydney this weekend in a non-playing capacity to be part of a huge celebration of football as the Saints take on the Swans at the SCG tomorrow.

It will be Lance Franklin’s 300th AFL game as the Swans farewell retiring greats Jarrad McVeigh and Kieren Jack.

“Dave should be incredibly proud of what he was able to achieve in his time at the Saints,” Lethlean said.

“His past few years have unfortunately been hampered by injury, but at his prime he was right up there with the best midfielders in the game.

“Despite the setbacks, he has continued to be a huge presence at the club, helping drive a culture that can deliver success in the coming years.

“We wish Dave, his fiancé Jessie and son Parker all the best for the future. They will forever be part of the Saints family.”

Armitage, born in Mackay and a product of then AFL Queensland club Morningside, is remembered at the Lions who prior to being drafted worked in the club’s merchandise shop at the Gabba.

He headed a Queensland draft that will never be matched. Players chosen in the national draft after him, headed by selection #17 Shaun Hampson, were:-

#17 – Shaun Hampson – played 98 games with Carlton and Richmond from 2007-16 and currently finds himself in the reality TV show ‘Survivor’.

#25 – Brad Howard – played 2 games with St Kilda in 2007 before returning home to play with Redland in the local competition.

#76 – Paul O’Shea – Was drafted by the Western Bulldogs but didn’t play in the AFL.

Harbrow, set to play his 245th game for the Suns as the 2019 home-and-away season ends this weekend, was among seven Queenslanders taken in the 2007 Rookie Draft shortly after the 2006 National Draft. They were:-

#13 – Chris Smith – joined Fremantle but did not play in the AFL.

#21 – Gavin Grose – joined Port Adelaide but did not play at the AFL. Returned home and is still playing with Aspley in the NEAFL.

#27 – Jarrod Harbrow – the Cairns product was drafted from the Murray Bushrangers by the Western Bulldogs. He has played 244 games with the Bulldogs and the Gold Coast Suns, including the Dogs’ 2008-09-10 preliminary final. He is the reigning club champion at the Suns and the games record-holder.

#48 – Haydn Kiel – was drafted by Brisbane and later Hawthorn, but didn’t play in the AFL.