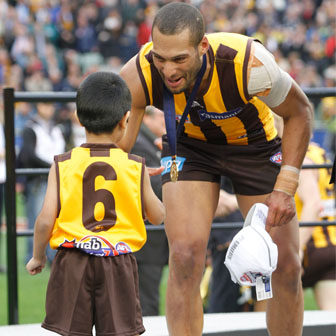 Mount Ommaney Auskicker, Yuvraj Singh, was the envy of his friends on the weekend when he was a part of greatness, participating in the 2013 Toyota AFL Grand Final, one of the biggest events on the Australian sporting calendar.

Grand Final Day was undoubtedly the highlight of the trip when Yuvraj played NAB AFL Auskick on the MCG in front of 100,000 fans prior to the commencement of the big game.  After the match Yuvraj, along with the other 21 NAB AFL Auskicker of the Year nominees, presented the Hawthorn players with their 2013 Toyota AFL Premiership Medals.

“It was so exciting to play in front of so many people on the MCG, and getting to present a premiership medal with all my friends and family watching on TV was really cool too,” Yuvraj said.

Young Yuvraj’s opportunity to participate in this unforgettable three day Toyota AFL Grand Final experience came to life through NAB’s Auskicker of the Year competition.  This competition exists to reward selected NAB AFL Auskick participants across the country for their teamwork, passion and commitment to the sport.

NAB is dedicated to Footifying Australia and has been genuinely growing the game for the past ten years through support of programs like NAB AFL Auskick. Every year, over 180,000 children participate in NAB AFL Auskick at one of 2,900 centres nationwide.