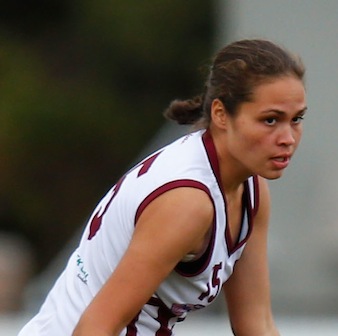 Queensland has survived a thriller with Victoria Country/Tasmania to claim third spot at the Youth Girls National Championships.

But it wasn’t to be with King’s effort securing a fie-point victory and leaving the hosts to wonder what might have been.

Earlier both teams struggled to find an avenue to goal with the girls from the north misfiring but doing enough to enjoy a six-point lead at half time.

With Tayla Harris dominating in the ruck and Tala Zanotti proving difficult to pass at centre half back, it was difficult to see how Vic Country/Tas could force itself on the scoreboard.

Their task was made even harder when gun on-baller Jordan Zanchetta found Chelsea waiting at the top of the goal square.

But from nowhere, and inspired by their group of fleet-footed midfielders, the hosts found their run.

On-ballers Lily Mithen, playing the game of her life, Grace Campbell and Jenna Bruton wrestled control in the middle and Lori Stepnell rewarded their efforts with a towering mark and goal at the top of the goal square.

The tension continued in the final term as Harris was awarded a 50m and drilled one from 40m that sent Queensland 11 points clear.

Vic Country/Tas came again and with Ayre’s shot enough to steal the lead for the first time in the match. But the momentum was short lived with Queensland responding immediately from the restart.

A late running goal to Elisha King proved the final note in an epic contest that hung in the balance until the final siren.

Winging it: Making the grade
NEAFL vs. SANFL live on ABC today