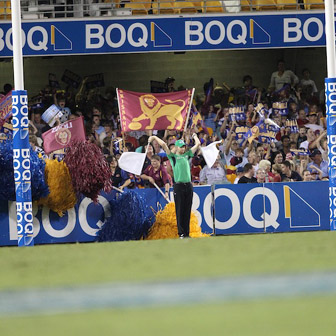 AFL stars Dayne Beams and Courtenay Dempsey will have two other Queenslanders for company in the NAB Cup grand final at Etihad Stadium on Friday night.

Symes began goal umpiring in the QAFL in 1998 and waved the flags in two interstate games and a grand final.

He has placed a particular emphasis on improving his fitness and his time trials and skin folds are at an alltime best.

Hill learnt his craft in the SANFL before transferring to Queensland.

He ran the boundary in the epic 2003 QAFL grand final between Morningside and Southport and again in the following season premiership decider.

Hill umpired in two AFL premiership season finals last season, which ranks him in the top 16 boundary riders in the country.

His appointment continues the momentum.

“To umpire in front of 48 or 50,000 people in a grand final – there’s only two of them every year – is a fantastic opportunity for Tristan and Mark,” said NEAFL boundary umpires coach Grant Kent.

PEDIGREE FOR NEAFL SUCCESS, OR NOT?
LEGEND WHITE CALLS TIME ON NEAFL