QLD U18s up the ante for Nationals Rd 1 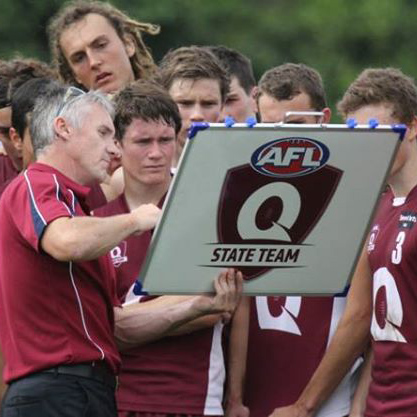 Queensland’s opening U18 National Championships match will be all about entrenching the state’s on the football map, coach Adrian Fletcher, says.

Facing Tasmania in Blacktown, Fletcher said his side wanted to prove itself as a legitimate contender.

“The challenge is we want to show that we’re a footy state,” he said.

“We’d play in the car park if we had to, that’s the attitude we have.

The Queenslanders have been in strong early form, with two TAC Cup wins from their last two starts, but Fletcher said state footy would be another step up.

“Now, we hand the baton to them (players) to see if they can do it on the big stage,” he said.

“It’s really playing for your state now, against another state.

“The pressure will be up, but we can handle it because we’ve trained for it.”

Fletcher said his side would need to follow on with the team-oriented football they showed in their last win, over the Eastern Ranges.

‘That can go missing pretty quickly and we need to regroup, after positives and negatives,” he said.

Tasmania has gone winless in its two TAC Cup lead up matches, but Fletcher said that would be irrelevant on Saturday.

“They always find a person under a log somewhere who can play football,” he said.

“We need to make sure we turn up the energy.”

Two players who will definitely be on Queensland’s radar this weekend are captain, Tim Jones, and Caleb Hislop.

Jones led his team strongly in their last start, racking up 30 disposals, while Hislop, brother of former Essendon and Richmond player Tom, collected 32 in an important midfield performance.

Morningside’s Matt Hammelmann will come back into the Queensland team for the match, after a successful comeback from injury for the Panthers last weekend, while Hayden Bertoli-Simmonds also returns to the team.