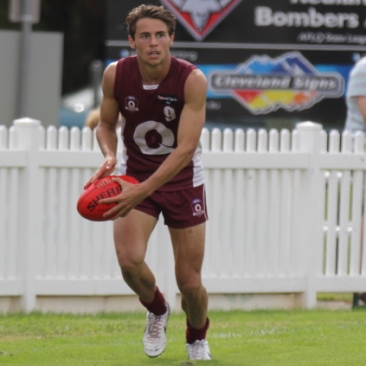 Queensland ground out a tough 30-point win over NT, to keep their undefeated start to the National U18 Championships.

Midfielder, Lachie Weller, stood tall for Queensland, with 25 touches and two goals, in an outstanding performance.

After a quiet first match against Tasmania, the Gold Coaster proved his class with a best on ground showing, exceptional in defence as well as attack, with six tackles.

Queensland utilised the breeze in the final term, kicking long to its tall timber, in Braydon Preuss  (two goals) and Matt Uebergang (two goals), stretching out a 17-point three quarter time lead in the process.

Down to three on the bench midway through the first quarter after a shoulder injury to Aspley’s Liam Dawson, Queensland maintained its lead over the Territorians all day.

“It wasn’t our greatest game, but we ground it out,” he said.

“They (NT) put a bit more pressure on and dug deep (after quarter time) and we got sucked in.”

“We challenged them at half time and Lachie (Weller) stood up and Darcy (Trask) stood up, so from that point of view, I was really pleased.”

Dawson’s loss was a major blow for Queensland, with the utility unlikely to play in Queensland’s final match, but Fletcher was pragmatic about it after the game.

“He’s not the guy we’d want to lose, we’ll just have to see what happens,” he said.

“We can’t do much about it, though, it’s a contact sport and we’ve got to move on and try to get our best available team for NSW/ACT.”

NT’s Abraham Ankers (28 touches) and Errin Wasley-Black were the best for the NT, continuing their recent run of good form.

The win sets up a blockbuster Rd 3 clash for Queensland against NSW/ACT, where a win would secure the state its first national title since 2006, an chance that Fletcher is eagerly anticipating.

“It’s going to be a great opportunity for out boys on a big stage at Etihad (Stadium)_on Wednesday,” he said.

“We’re going to have to raise the bar.”