QLD U18s look to the future 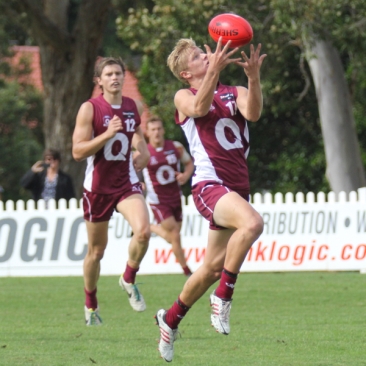 Queensland has one eye on the bigger picture, fielding a new-look side for Sunday’s TAC Cup clash with the North Ballarat Rebels.

The Queenslanders have made seven changes to the 25 that travelled to Melbourne for the national U18 Championshipsl, with AFL Queensland Academy and High Performance coach, Adrian Fletcher, keen to set the groundwork for 2015.

Four bottom-agers will line up for Queensland, with Aaron Yusia-Maricic in for his first game of the year, alongside Glendon Woosup, Ben Keays and Corey Wagner.

“We’ve got a few of those guys in who’ll be around for a while, next year and it’s exciting,” Fletcher said.

“They’ve got to try and fit 75 into a team, so that’s what we’re trying to do, create depth throughout Queensland.”

One of the major absences is that of Lachie Weller, who will likely play senior football for NEAFL side Southport for the remainder of the season, but Fletcher says the changes won’t affect his side.

“We want our players to play against bigger bodies because we feel that it’s great development for them,” he said.

“It’s been a team effort so far, so there’ll be no problem; it’s just an opportunity to further their development.”

While the match will be a prime opportunity for the state’s bottom-agers to get a feel for the TAC Cup competition, Fletcher said it would also be crucial for this year’s draft crop to show recruiters their potential.

“We know there’ll be people out there watching and it’s their opportunity to show their wares,” he said.

“They need to show that they’re good enough to play at the next level and they are, I know they are.

“They just need to put it together on the day.”

Morningside’s Dylan Adkins is one of the new faces in the side, a former runner who is finding his feet as a tall defender, while Isaac Hay, Cassidy Haberfield and Robert Blood return to the Queensland team for Sunday’s match.

Maroochydore’s Will Kristelly will have his work cut out in the ruck, up against in-form Rebel, Rowan Marshall, who has dominated in recent weeks.

Oscar McDonald will be another player of concern for Queensland, with the brother of Melbourne’s Tom showing his versatility this season, able to play forward or back.

The rebels have shown plenty of form this season, winning eight of their last nine games after a sluggish start to the year.

Queensland takes on North Ballarat at Graham Rd on Sunday, kicking off at 10:30am.