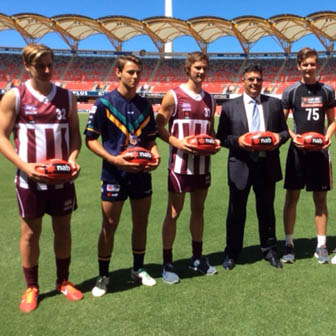 Every AFL player listed by the 18 AFL clubs this season have taken part in a key element of the NAB AFL Rising Stars Program – 77 per cent this year’s players have taken part in the NAB AFL Under-18 Championships before reaching the AFL and a quarter are graduates of the AFL National Academies (formerly known as AIS-AFL Academies).

Mr Demetriou today launched the 2014 NAB AFL Rising Stars Program at Metricon Stadium on the Gold Coast, which continues to be a hub of the program.

Not only is the Gold Coast home to 2013 NAB AFL Rising Star, Jaeger O’Meara, the region will host the 2014 NAB AFL Under-16 Championships from July 5-12. Matches will be played at Metricon Stadium, Southport and Broadbeach.

The 2014 NAB AFL Draft will also be held at the Gold Coast Exhibition and Conference Centre.

Mr Demetriou also announced changes to the NAB AFL Under-18 Championships. Division One teams (Vic Metro, Vic Country, South Australia and Western Australia) will now play each other twice in a home and away style format. Division Two teams (Queensland, NSW-ACT, Tasmania and Northern Territory) will play each other once allowing for players to play more matches in the TAC Cup. A representative Division Two “Rising Stars” team will also play the AFL National Academy (Level 2) team during Grand Final week.

The NAB AFL Rising Stars Program is the AFL’s talent identification and development program that provides young footballers with a clear pathway to playing at the elite level. The program also supports grassroots players and football communities throughout the country.

The National Australia Bank has proudly sponsored every element of the program since 2002.

The program annually involves more than 750 players aged between 15 to 21 years and consists of the following elements:

“Our fans want to see the most talented athletes playing our game and while the competition to find the best players has never been fiercer, the NAB AFL Rising Stars Program helps our clubs identify and select the best young talent in the country.

“The outstanding support from NAB over 12 years has enabled the program to expand and support not only players at the elite level but the grassroots clubs where football careers begin,” Mr Demetriou said.

“As a longstanding supporter of the AFL, NAB is delighted to be associated with the NAB AFL Rising Stars Program and the young talent represented here today. Our support of this program allows us to play a genuine role in growing the game, which is fundamental to our ongoing commitment to Footifying Australia,” said Kevin Ramsdale, NAB General Manager Consumer Marketing.

“To bring these young footballers together today is a perfect demonstration of how the pathway really does foster access to the elite level,” he continued.

The NAB AFL Rising Stars Program is active throughout the year. Highlights include: