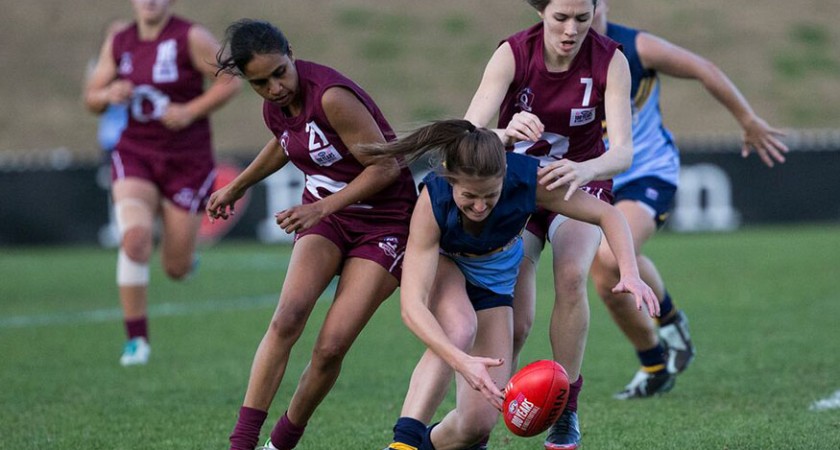 A red-hot Queensland outfit won a landmark state women’s match against NSW/ACT in Sydney on Sunday afternoon, beating the home side by 47 points.

The visitors’ 11.9.75 to 4.4.28 victory was punctuated by an outstanding individual performance from star utility Tayla Harris, who caused the NSW/ACT defence all manner of problems with her prodigious vertical leap and strong overhead marking.

Coorparoo duo Hannah Sexton and Megan Hunt were eye-catching on a wing and half forward flank respectively, while skipper Emma Zielke led from the front in the midfield for the Maroons.

In perfect conditions at Blacktown International Sports Park, the first-ever match at open state level between the sides was a highly entertaining affair, with both teams aggressive around the contest and unwavering in their attack on the ball all afternoon.

The scoreline didn’t emphasise how even this game was in general play at times, especially after half-time, when Chris Hughes’s outfit played their best football.

NSW/ACT’s pressure at the contest was noteworthy, as was their intent to switch, create space, and break the lines.

But under the guidance of Collingwood premiership player Craig Starcevich, the visitors had composure and polish that the home side lacked at times, and that was the difference in the end.

Despite the loss, there was plenty of cause for excitement amongst the vocal 150-strong contingent of NSW/ACT supporters, underlined by one of the most stunning individual six-pointers seen in women’s representative clashes, courtesy of Lael Kassem.

Kassem, one of the founding members of the groundbreaking Auburn GIANTS female team, channeled a runaway Rugby League fullback in her audacious 50 metre dash, evading three defenders, taking three running bounces, and dribbling through a major from the goal square.

The fact the goal of the afternoon came midway through the final term was testament to the never-say-die attitude of the girls in blue, their run and endeavour constant to the last, despite the game being out of grasp.

Along with Kassem, who was electric off a half-back-flank all afternoon, the home side was well served by Nicola Barr on debut, along with Britt Tully, and Jen Lew.

Canberra’s Western Bulldogs draftee Heather Anderson had a solid day out commandeering the middle of the ground, Steph Walker had her moments of run and carry, and Bec Beeson worked hard up forward, proving a good focal point and always creating a contest.

The players will now look forward to the second women’s exhibition game of the year between the Western Bulldogs and Melbourne Demons, with several putting themselves well in contention to have their names read out in the year’s second female draft, to be held later this month.

A full replay of the match can be streamed through the AFL NSW/ACT YouTube page.

A red-hot Queensland outfit won a landmark state women’s match against NSW/ACT in Sydney on Sunday afternoon, beating the home side by 47 points.