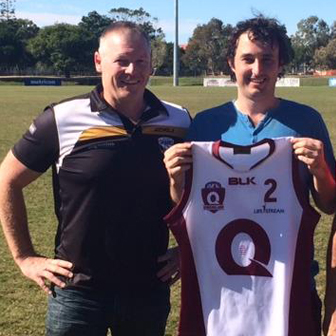 The Queensland Inclusion Team heads to Melbourne this week for the National Inclusion Carnival from June 18-23.

The team was presented with the classic ‘Q’ maroon jumper on Sunday in front of family, friends, and supporters.

Grayden Poulsen was named as captain and Kieran Landells as vice-captain.

“The players have come a long way since we first met,” Searl said.

The inclusion program started with AFL Queensland reaching out to Gold Coast Recreation and Sport to attend their sporting clinics.

“We invited them to train on a Monday and started with about 35 boys and girls aged from 8 to 25,” Searl said.

Two teams from the Gold Coast and Brisbane were formed and the training and practice matches commenced.

The teams trained with senior teams from various clubs, and played curtain-raiser matches for those senior teams in front of large crowds.

From these efforts, a state inclusion squad was selected to represent Queensland at the National Inclusion Carnival.

Captain Grayden Poulsen said he was excited to captain the state.

“It’s a great honour to be named captain,” Poulsen said.

“The team is looking forward to going to Melbourne and playing in the carnival”.