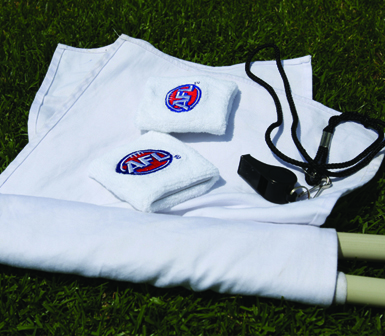 Whilst the whole state wishes all Queenslanders in the AFL Draft the best with the upcoming November Draft on the Gold Coast, Queensland has also reached another milestone in the development of the game.  In what is a significant recognition of the talent AFLQ produces in the football world,  the QAFL’s three senior Grand Final Umpires have all been invited to trial for a position on the AFL’s List.

Umpires Brett Kronk (26 years), Matthew McKenzie(27) and Ben Ryan (28) will all undertake a gruelling preseason training routine to meet the AFL’s fitness testing benchmarks in February 2011.  All three will have the opportunity to officiate in the Nab Cup or Nab Challenge Preseason Competitions before the AFL finalises its senior and rookie lists for 2011.

Matthew McKenzie and Ben Ryan were both rookie listed umpires who acted as Emergency umpires for the Brisbane Lions Home Games throughout the 2010 Season.  They will now have the opportunity to graduate to the senior list or retain a rookie position.  Brett Kronk has a opportunity to trial for the first time.

State Umpiring Manager Greg Howell acknowledged the achievement and praised the efforts of all three umpires throughtout the QAFL 2010 season.  “It’s a great achievement for the guys and we are certain they are up for the challenge in front of them” commented  Howell.

Umpires Coach Andrew Reeves said that he was very excited about the prospect of the three umpires trialling for AFL, “ Its a credit to them and they way they perform  at a consistently high level”.  Furthermore Reeves was upbeat about the developing umpire stocks  on his current list describing them as a group with “significant potential and opportunities”.  “This year paves the way for those behind, we are getting recognised as a state that can produce quality umpires and that bodes well for our future” said Reeves.

Noticeably all three are from Regional areas of Queensland originally. Kronk and Mckenzie are from the the Sunshine and Gold Coast’s respectively whilst Ryan hails from Rockhampton.   All three have been a part of the AFLQ System for a number of years, originally beginning their involvement through development squads and Umpiring Academies.

For more information on Umpiring or this item please contact Greg Howell on 07 3033 5421 or ghowell@aflq-new.fspdev.com