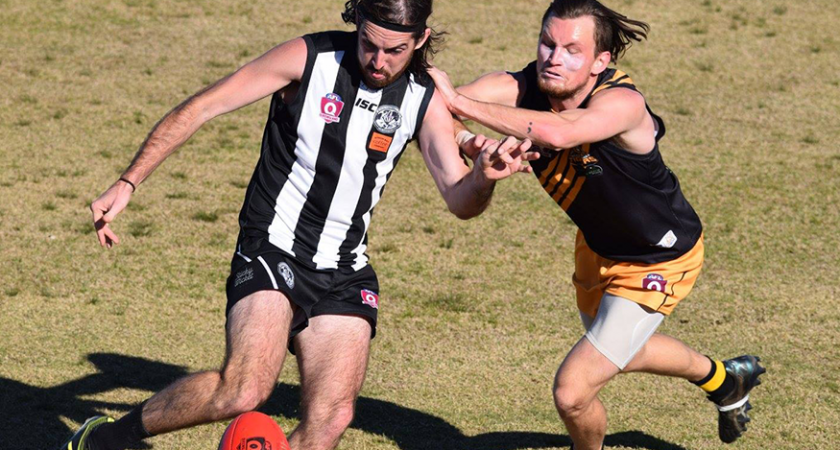 Excluding their round 13 shock loss to the Ballina Bombers, the Byron Magpies have terrorized the QFA Northern Rivers competition, dealing out some emphatic victories this season.

Standing in the way of a Magpie premiership are the proud Tweed Coast Tigers, after a strong showing against the Lismore Swans in the semifinals and a fairytale, four-point win over the second-placed Ballina Bombers in their preliminary final.

Tweed Coast President Ben Kelly said the win over Ballina was a milestone win for the team and, something the team can all hang their hat on heading into the big dance this weekend.

“Last week against Ballina we were still light on missing some of our top players. So, getting over Ballina was a real gutsy achievement,” said Kelly.

The Magpies have had the upper hand on every one of the four occasions these sides have met this season, boasting an average winning margin of 66 points against the Tigers.

Even with this terrific track record, player and coach of Byron Bay Brett Porter said there is no complacency throughout the team.

“No complacency, not at this stage. We’ve gone through everything we need to do and as you know finals is a different story so, the last few weeks we’ve just improved and we are in a good space,” said Porter.

Despite their record against the Magpies, the Tigers still have some confidence they can take out the flag.

“They deserve to be heavy favorites but our finals record speaks for itself. We’re quietly confident,” said Kelly.

As the Tigers have shown, finals are indeed different ball game and the grand final is different again. They’ll be looking to their top goal scorer Glen Phelps, to hopefully add to his league topping total of 71 goals for the year.

“Phelpsy gets all the accolades and he is a wonderful player and we are very lucky to have him but, there is no one player that will help us beat Byron,” said Kelly.

This season has shown that the Magpies have multiple avenues to goal and while Brett Porter looms as the main threat (60 goals for the season), both Jackson Coppin (32) and Bill Barry (25) are capable of bobbing up and kicking a bag.

Even though the Tigers have lost their last four to the Magpies, they only need to win once and Saturday afternoon in a grand final would be the perfect time to pull off an upset.

The grand final will be played at Byron Bay Sports Complex this Saturday afternoon at 2:15pm, straight after the QWFA grand final.

Come Saturday, the Ballina Bombers will aim to put a stop to the continued dominance of the Byron Magpies in the reserves this season. The Magpies have managed to go through the 2017 season undefeated in the reserves and lost only one game in the seniors; which says plenty about their depth.

The Magpies have plenty of firepower up front with four of the top five goal kicking league leaders in their side. Sitting on top of the goal kicking table is Magpies forward Dane Davidson, who’ll require a shut down defender if the Bombers are to have a chance at taking away the silverware.

Winning the midfield battle is going to be crucial for the Bombers, if they can put the brakes on the Magpies ball winners and win their share of the footy they’ll be able to cut the supply off at the source.

“I think the key to us being able to take it to Byron and hopefully come away with the win this weekend, is going to be man on man pressure,” said Ballina Bombers president Collin O’Brien.

Expect the Bombers to look for their leading goal kicker in player coach Simon Crocker when they head forward. The Ballina spearhead has shown this season that he’s able to put together a bag if he gets a run at the footy.

“He (Simon) has done very well down there this year,” said O’Brien.

“He’s very much cemented himself in the forward line so it’s been great for the guys.”

While the Magpies will be heavy favorites, the problem with being the king is that everyone else wants the crown and the Bombers are no exception.

By Sean Melrose and Aaron Goodwin