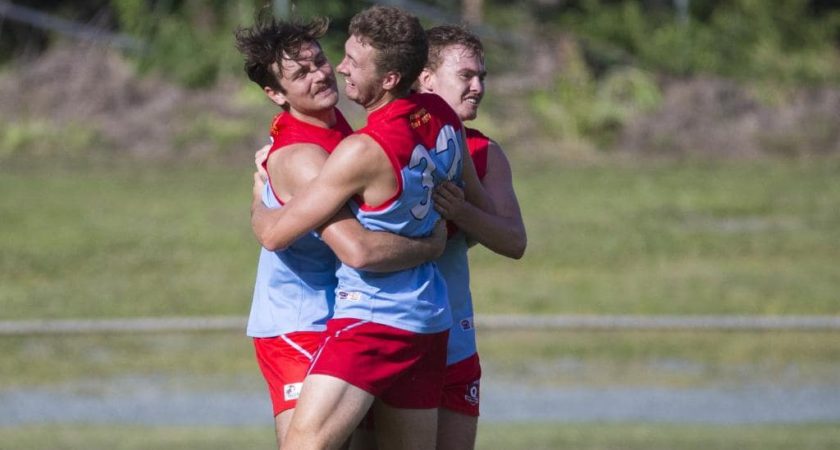 IS there an omen there when Ashley Templar goes into battle for the Saints in the Division 3 Grand Final between Carrara and Ipswich at Bendigo Bank Oval?

For those old enough to remember, it was a character with the surname of Templar, this one Simon, who was a star in the old television hit called The Saint when Roger Moore played the role of the espionage/spy hero.

Fast track almost 50 years and another Templar is set for a star role for Carrara Saints and, ironically, it comes 12 months after he was one of the leading lights in last year’s Grand Final.

Templar played for Victoria Point Sharks, who beat Ipswich in the 2017 decider by 79 points and the spearhead kicked eight big ones.

Templar said he had not really thought about the irony of a Templar playing for the Saints, but he conceded that even though he kicked eight in last year’s premiership decider he was not overly happy.

Templar senses a feeling of déjà vu coming up against Ipswich for the second year in a row but with a different club.

Templar has kicked 95 goals for the season, second to only Ipswich ace Zachary Jahn (114) heading into a shootout between the leading scorers.

There is a huge reward for the winners of the flag decider, particularly considering neither club has won a premiership trophy before. Ipswich have been going since 2001 and Carrara since 2009.

While Carrara coach Nick Pearson has tasted a grand final success, such is not the case for Ipswich boss Kym Mansell.

He lost two in a row playing for Ipswich against Robina in 2004 and 2005 and last year was coach when the Eagles were thrashed by Victoria Point.

Pearson says the fact that one of the clubs is finally going to have a trophy to put in their clubhouses will provide a lot of motivation for the game.

“It’s going to be an emotional afternoon one way or the other because there’s a lot to play for,” Pearson said.

“I think it’s good for footy that someone’s going to walk away with their first premiership.”

Everybody, it seems, believes this clash is going to be decided one way or the other by the physicality of the stronger Saints or by the sheer pace and run of the Eagles.

The last time the teams played there was just a point in it at three-quarter time of the second semi-final before Ipswich ran all over the top of the visitors at Limestone Park.

But the score between the clubs this year stands at two-all with victories to both on their home grounds.

Mansell feels his midfield group of Chris Devlin, Trent McCrossen, Matt Sheridan and Keith Brick can get the job done.

“They have four of the biggest names in competition in Jordie Graigner, Mitch Vasterink, Templar and Joe Lopez but I know we can do the job,” Mansell said.

Neither coach is concerned about playing on neutral territory and both declined the opportunity to have a run on Wilston Grange’s home ground at Bendigo Bank Oval.

Mansell said he had a look at the venue during the week, as did Pearson, but the latter went to the extent of taking a tape to the ground to find out the exact dimensions.

“There is only 11 metres difference in length to our ground and the width is a bit bigger, but I’m not overly concerned,” he said.

“Where we got caught out at Limestone Park was the length of the ground.”

Pearson expects two key players, key defender Nick Roberts and flanker Jackson Goodchild, to be geared up for the weekend.

KEDRON coach David Cooke has identified James Kenny as the one to take on one of the toughest jobs in the QFA Division 3 reserves competition.

Smith confirmed Kenny will be given first shot on Redcliffe sharpshooter Andrew Kouvaras in the Grand Final at Bendigo Bank Oval.

The Redcliffe ace, who has kicked 91 goals so far this season, clearly represents a danger for Kedron although Cooke has enormous faith in Kenny to handle the key job.

“He (Kouvaras) just clunks marks in the goal square which isn’t great for us,” Smith said of the danger the Tiger attacker represents.

Kouvaras has played three times against Kedron this season and kicked 14 goals with hauls of five, four and five, the latest haul in the second semi-final when Redcliffe were beaten for the first and only time this year.

In contrast Kedron’s leading goalkicker is Jack Fulham with 31, but from only 11 appearances.

But Cooke believes the Lions have an even balance across the park with speed and youth, key factors in the coach’s tactics.

“Our key to winning is our speed and our youth which got over the top of them the last time,” Smith said.

No doubt Redcliffe will be fired up to exact revenge on their cross-city rivals after losing to them in the semi-final.

Coach Tony Dantel said that while Kouvaras has been the in-form scorer for the Tigers there are several options up forward for him, including Damien Marsland and Jason Apps.

Conceding that he and his players learnt a lot from the semi-final loss, Dantel now expects a far better effort in the most important game of the year.

Kedron hope to get a key player in Ash Oneill back from the Army for the game.

Coach Cooke said he has had no issues with keeping his players’ minds on the job after their surprise semi-final victory.

“Our blokes are fired up but seem to be keeping their cool about it,” he said.