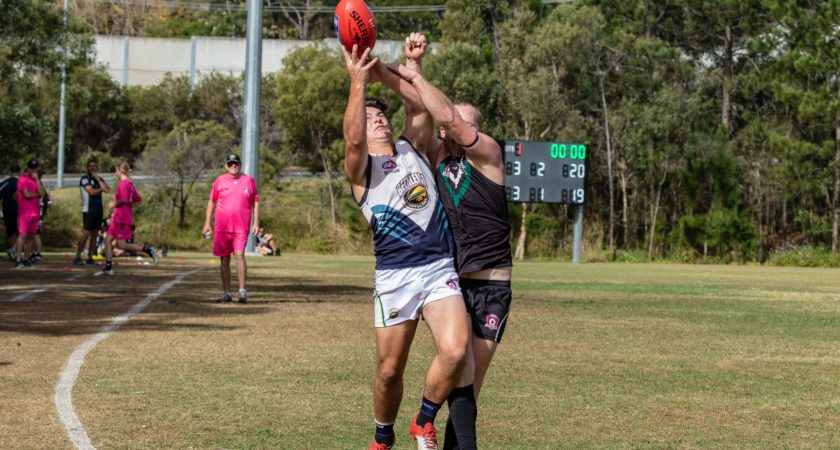 THE stakes are high for the two outer south-west Brisbane clubs in their showdown for the QFA Division 2 flag in Brisbane on Sunday.

First of all there is the matter of a premiership title when former favourites Park Ridge Pirates take on the fast-finishing Beenleigh Buffaloes at Leyshon Park.

Park Ridge, only 10 years old as a club, have never been in a grand final, let alone win one.

Beenleigh have been around for 20 years but have just the one premiership, which they won by beating Robina in 2009.

That breakthrough came after the Buffaloes had lost to Kedron and Redcliffe in successive grand finals in 2007 and 2008.

The Buffaloes also lost the 2012 grand final to Coomera.

But away from a flag to fly high, there is also a matter of promotion to Division 1 for the winning club.

“I think it’s going to be a really tough and close game,” said Graham “Bomber” Adams, coach of Park Ridge, who had lost just the one game before falling to Beenleigh in the Second Semi-Final a fortnight ago.

The Buffaloes won that game by a convincing 39 points after their speed and run and carry proved too vibrant for the Pirates.

This is where the Pirates have to lift, Adams agreed, to be able to claim the premiership title.

Asked what he has been working on to reverse that result, Adams replied: “Get our skills right, man up and we can turn it around that way.

“They ran us off our legs last time, they played exceptionally well, so we have to be more accountable across the ground.

“We let them run and none of our boys wanted to man up.”

Ryan Birnie was a star for the Buffaloes in the semi-final, kicking five goals from a wing and being named second best behind Josh James.

A key for the Pirates is if the competition’s leading goalkicker Aden Rutledge can fire up.

Rutledge has 67 for the season while Beenleigh’d best is Kade Luck with 39.
While Park Ridge have brought two players in – Kade Adams, son of Graham, and Jack Overington after completing a suspension — the Buffaloes will go in with the same 22 who beat Park ridge a fortnight ago.

A week off and having stability are two things in Beenleigh’s favour.

“We go in unchanged, which is great, and we’re fresh after the week off, which has done us the world of good because we were pretty sore after the last game against Park Ridge,” coach Cameron James said.

“So we’ve pretty much done all we can do and we’re excited about it all – it’s exciting times.”

James said there are no plans to change what worked the last time the sides met and that means pace, pace and more pace is the Beenleigh buzz word.

“There are no plans to change anything,” James said.

“It doesn’t matter where we’re playing, speed around the ground can hurt any opposition.”

THE standout statistic in matches this season between the Kenmore Bears and Bond University Bullsharks has been the inability of the latter to kick anything like a winning score against their weekend rivals.

The Bears and the Bullsharks clash in the QFA Division 2 Grand Final at Leyshon Park on Sunday (11.45am) and it is clear the Bullsharks need to find avenues to get a decent total on the scoreboard.

That 63-point margin indicates the job ahead for the Gold Coast students, although with their seniors in mothballs, they should have a few more experienced players qualified for the seconds. Having said that, Kenmore have had that luxury for the finals as well.

A look at the season statistics indicates just why the scores have been so low between these clubs, with their last clash being an exception to the rule.

Best scorer for both sides is Bond’s Mitchell Dunn with just 33 majors.

Joe Pearce is Kenmore’s most prolific goalkicker with 29.

IT is the Battle of the Bayside when Moreton Bay and Victoria Point lock horns in the QFA Colts White Grand Final at Leyshon Park on Sunday morning (9am first bounce).

The flag rivals emerged from the preliminary rounds as clearly the best two sides in the competition with the Bay Lions finishing on 60 points and the Sharks on 56.

And there has been little between them each time they have met this season.

The Lions won by 24 points in a ninth round game at their Moreton Bay headquarters and before that, also took out their other encounter when they won by six points at Shark Park.

Perhaps the next meeting was the one where the Lions grabbed a psychological advantage when they won by 85-61 despite Bailey Hewitt’s five goals for the Sharks.

Victoria Point then bounced back with a big 19.21 (135) to 3.1 (19) win over Coomera in last weekend’s Preliminary Final when Hewitt kicked four majors.

It is clear that the odds are stacked against the Sharks, going on their in-season record against Sunday’s opponents, but grand finals are a different kettle of fish (or Sharks in this case).

The keys for a Victoria Point upset should be Hewitt, captain and tall forward Ryan McCallum, midfielder/small forward Matt Warren and Will Kerr, a creative outside midfielder.