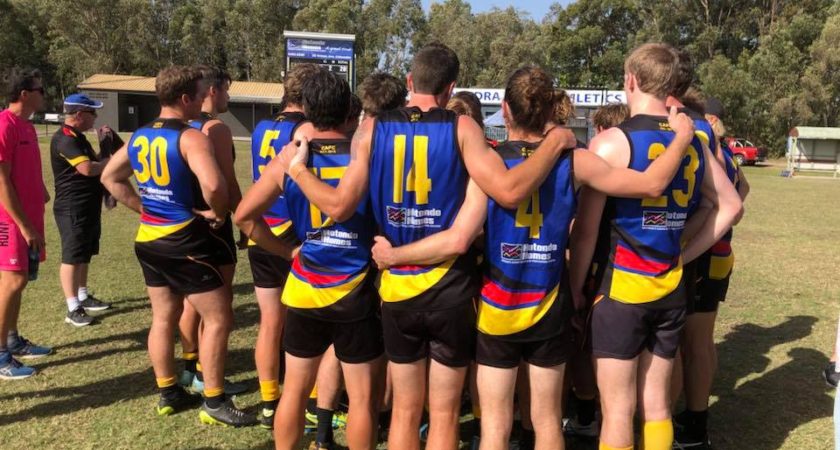 Noosa has powered its way to a second straight Grand Final berth in the QFA Division 1 HART Sport Cup competition after completing a gutsy 11-point win over arch rivals Maroochydore on Saturday afternoon.

The Tigers stormed out of the blocks and established a comfortable lead but were forced to withstand the fast finishing Roos on their home deck to win 20.12 (132) to 18.13 (121).

Now, Noosa has earned a week off before September 15th’s big shebang at Leyshon Park, Yeronga, while Maroochydore will face a do or die preliminary final against fellow rivals Caloundra.

Led in attack by star man Liam Kenny, Noosa powered their way to a sizeable lead in the first half.

While both sides got out of the blocks early, it was the Tigers who continued their assault on the scoreboard. Noosa booted the opening five goals of the second term to widen the deficit to 46-points in the shadows of halftime.

The Roos’ goal-kicking centurion Mitch Scholard gave the home side some reprieve with two goals late in the term.

Scholard’s late majors gave the Roos hope in the second half despite the margin, as Maroochydore stormed out of the blocks to kick the opening three goals of the second half, including one to young ruck/forward Jack Tomkinson.

But just like they had in the second term, Noosa ramped up the pressure and by the siren for three-quarter time, the Tigers had opened up a 57-point lead.

Maroochydore stormed home, kicking six goals to one in the final quarter to fall just two goals shy of a miracle come from behind win.

At centre half forward, Jason Kennedy was pivotal for the Roos alongside Dzufer, while for the Tigers, the six goals from Liam Kenny and the work of Joel Lambourn and Jai Fitzpatrick further up the ground, aided Noosa to victory.

Caloundra responded emphatically from last week’s loss to Noosa to ensure the final fortnight of the QFA Division 1 HART Sport Cup would be an all-Sunshine Coast affair after the Panthers’ defeated Coorparoo by 14-points.

The Panthers outlasted the competition’s only remaining Brisbane club in the 13.14 (92) to 12.6 (78) affair, after finding themselves trailing at three quarter time.

With the win, the Panthers face a must-win game in this week’s preliminary final against reigning premier Maroochydore – a side the Panthers have failed to beat since Round 5 2016, although they chalked up a draw earlier in the season.

Caloundra head coach Steve Moody was pleased to get the win against Coorparoo but implored the need for improvement if the Panthers are to cause an upset and win against Maroochydore this weekend.

“We showed a bit of resolve. We weren’t playing overly well in the first half so it was looking a little bit concerning. Coorparoo were very good; they played a smart game,” Moody told aflq.com.au.

“I think [against Maroochydore] we just need to relax and play our natural game. We don’t hold any fears about them but we know we have to be really good in the contest.”

The home side Panthers outmuscled the Kings in a hotly contested opening term as the team kicked three goals to two before the break.

Not much separated either side throughout the opening 20 minutes but Coorparoo, who had already beaten Caloundra once previously this season, willed themselves on top in the second.

Led by boom forward Jack Wratten, the Kings launched a comeback in the second quarter and by the time the siren sounded for the main break, Coorparoo had found themselves 14-points clear.

Caloundra booted the first goal of the third term to rescind the margin to within two goals, but it was the Kings again who rose to the occasion.

The two sides traded goals throughout the majority of the premiership term and Coorparoo’s lead remained intact at the final change.

With their season on the line, the Panthers began the final term with a bang and booted the first four goals of the term; overtaking the lead and putting them in a prime position to advance into the finals’ third week.

Consolation goals for Kings pair Ben Lynch and Riley Buntain reduced the margin, however the damage had already been done.

Lynch’s three majors made him one of five Kings players to kick multiple goals in a solid performance from the 18-year-old.

Meanwhile, Nathan Spring’s two majors for the Panthers landed him in the side’s bests alongside towering ruckman Trent Saxelby.