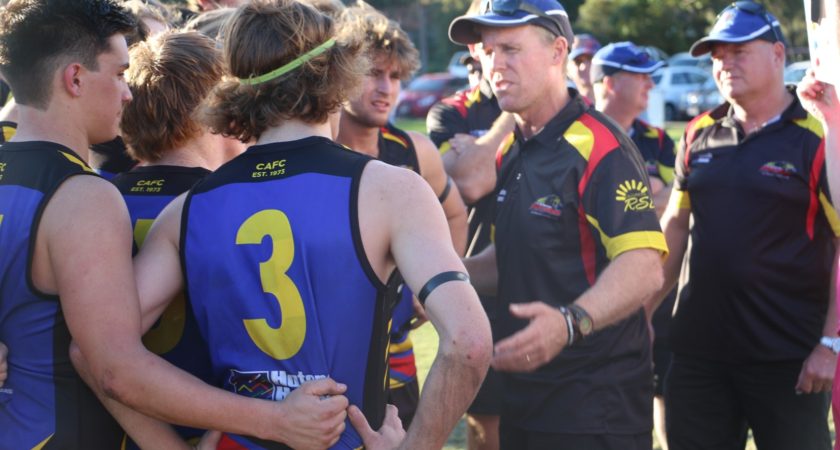 The final place in the Grand Final awaits the winner of the judgement day preliminary final showdown between Maroochydore and Caloundra.

If history is anything to go by, the Roos are prime favourites for the clash. That motive lends itself to the fact that the Panthers are yet to beat Maroochydore since early 2016 but did eke out a draw against them this season.

But while the Roos may have the wood convincingly over the Panthers, Caloundra head coach Steve Moody insists a lot has changed for both sides since their recent contests

“Our loss against them was in the first game of the year, so that was a long time ago. I’d probably just disregard that game,” Moody told aflq.com.au.

“Even the draw, you could probably argue that it was seven or so weeks ago, so a lot of water has gone under the bridge.”

Saturday’s showdown at Maroochydore will also create a small piece of HART Sport Cup history given it will be the third time the two sides will face off over the past three seasons.

Maroochydore, who have appeared in the past two Grand Finals, have obviously won out in those contests – by 38-points in 2016 and 29-points last year.

Yet despite those results, Moody implored that his Panthers would be ready for a challenge this time around.

“We do know that we’ll have to be really good in the contest and make sure we get our share of the footy going into our half of the ground,” Moody said.

“I think that we just have to appreciate that we have a good group of blokes as well and not get sucked into thinking that they are a star-studded side and that we can’t match it.

“We know we can beat them if we play well.”

Any chance of a Caloundra upset would hinge on a range of players to hit the scoreboard – something that has been beneficial for the Sunshine Coast club this season.

While spearhead Quinten Ross has booted a team-high 48 majors this year – the third most in Division 1 – the Panthers have made a knack of getting a bevy of players to add themselves onto the scoresheet.

Against the Kings last week, nine players hit the scoreboard, while the week before, six players accounted for the team’s eight goals in their loss to Noosa.

A Maroochydore win would likely entail performances from their usual suspects – Daniel Dzufer and Jacob Simpson in midfield and Jake Warren and Mitch Scholard down forward.

Either way, a date with Noosa next week at Yeronga awaits for whoever can reign victorious.