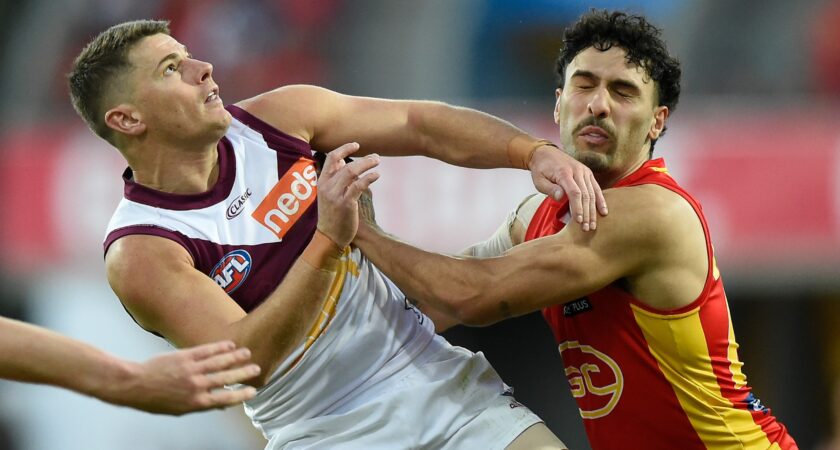 Lions captain Dayne Zorko will claim the QClash games record outright tomorrow afternoon with his 18th appearance in QClash #21 at the Gabba.

Zorko, who watched the first three games between the two Queensland AFL clubs while still trying to break into the competition, has not missed one since and will go one ahead of Gold Coast Suns veteran and 17-time QClasher Jarrod Harbrow.

Daniel Rich, the sole Brisbane survivor from QClash #1 in 2011, will play his 17th local derby, while Gold Coast co-captain David Swallow will chalk up his 16th.

Zorko will have another record in his sights too – he needs just eight possessions to reach the all-time QClash record of 371 held by ex-Lions captain Tom Rockliff. Just behind Zorko and Rockliff are Pearce Hanley (351), Swallow (335), Rich (326) and Harbrow (316).

But Zorko’s primary focus tomorrow will not be the record books. He will be all about the improving young Suns. And particularly vice-captain Touk Miller.

The pair have been big rivals since QClash #15 in 2018 when Miller did a superb  shutdown job on the prolific Zorko to inspire a five-point Suns win at the Gabba. He had 21 possessions and held his opponent to 10 possessions and a goal to also win the Ashcroft Medal and pick up two Brownlow votes.

Miller missed QClash #20 earlier this year through suspension but will go into this week’s clash in red hot form. He has topped 30 possessions in the last 11 games and sits third in voting for the AFL Coach’s Association Player of the Year Award, two votes behind joint leaders Marcus Bontempelli (WB) and Clayton Oliver (Melb).

The Lions, too, will be looking for a QClash record of their as they chase six wins on the trot.

It was a mark they set from QClash #2 after the Suns, rank outsiders in the first QClash, fielded a side with 13 first-year players but stunned their ‘big brothers’ with an eight-point win at the Gabba on Saturday, 7 May, 2011.

Even before the first bounce it was ‘on’, with teams trading insults in the media pre-match. Simon Black, encouraged to spice things up, branded ex-Lions Michael Rischitelli and Jared Brennan ‘mercenaries’ and took a swipe at the Suns’ AFL concessions.

Jonathan Brown said it was ‘personal’ because the Lions always stood to lose from the Suns’ inclusion to the competition, and Suns coach Guy McKenna said the Suns were “here to clean up the Brisbane Bears’ mess”.

QClash #1 was played on a picture-perfect Saturday night in front of a Gabba crowd of 25,501. Collingwood cast-off Danny Stanley notched the first QClash goal for the Suns as they kicked the first three to grab a 20-point start.

Twenty-four minutes into the last term Lion Todd Banfield levelled the scores on the run from 35m. There was a collective sigh of relief among hard-core Lions fans as ex-Brisbane Bears player turned Channel 7 commentator Matthew Campbell said “here they come” in commentary.

But Nathan Krakouer pulled down a screamer for the Suns to answer. The ‘new boys’ weren’t done with yet. Not even when Ash McGrath dribbled one through from the square for the Lions for his fifth to level the scores again.

Shortly after a controversial “play on” umpiring decision saw Brandon Matera put the Suns seven points clear from 30m after play had stopped. Ex-Lion Alastair Lynch, also in commentary, asked almost pleadingly “they haven’t paid the advantage have they?’ But they had.

It wasn’t the most controversial decision of the night. That was a second quarter goal umpiring howler in which the Suns’ Matt Shaw was awarded a major when TV replays showed the ball had clearly clipped the post, but it was all part of the Lions nightmare.

As if to rub salt into the wound, Brennan picked up the three Brownlow Medal votes with a game-high 30 possessions (21 contested), 14 clearances and a goal. And Rischitelli, who 12 months earlier had won the Merrett/Murray Medal, had 29 possessions and 10 tackles.

Zac Smith, a one-time soccer player in his sixth game for the Suns, earned two Brownlow votes for 22 possessions, 17 hit-outs and six clearances.

McGrath picked up one vote and with Rich, who finished with 26 possessions and three goals, were the Lions’ best. But personal performance was irrelevant. They were shattered. This was about pride, and the Lions’ pride was badly tarnished.

It was the birth of what very quickly became a genuine rivalry. Every meeting since, regardless of form, ladder positions and circumstances, has been a hot contest for local bragging rights.

It’s an even money bet, and if anything ‘form’ favors the Suns.

They lost no friends in a hard-fought 11-point loss to the Western Bulldogs last week after narrow wins over Richmond in Rounds 16-17, while the Lions are coming off losses to St.Kilda and Richmond and desperately need a win to resurrect their top four hopes.

Irishman James Madden and basketball convert Tom Fullarton will make their QClash debut for the Lions after coach Chris Fagan welcomed the return of Jarred Berry and recalled Callum AhChee while dropping Keidean Coleman, Jaxon Prior and Round 18 medical sub Tom Berry.

Madden and Fullarton will be the 98th and 99th Lions to play in a QClash, while the statistical notoriety of being the 100th will fall to Berry or fellow emergencies Connor Ballenden and would-be Lions first-gamer Nakia Cockatoo if they are chosen as the sub. Prior, the fourth emergency, played in the QClash earlier this year.

Selection on Thursday night completed a period of mixed emotions for AhChee and Coleman after both became fathers earlier in the week.

In selection news out of the Suns camp, Stuart Dew will go in without the injured Brandon Ellis and Nic Holman but will welcome back Oleg Markov.

The Suns, who have used 106 different players in 20 QClashes, included two players in their match squad who are in line not just for their QClash debut but their AFL debut – North Queenslander Alex Davies and NT’s Joel Jeffrey. Graduates of the Suns Academy, they join Will Brodie and Zac Smith in the battle for the sub’s spot.

Also enjoying the spotlight this week is Queenslander Alex Sexton, who will play his 150th AFL game.

Sexton is third on the all-time QClash goal-kicking list with 17 – two behind Zorko and 10 behind ex-Suns spearhead Tom Lynch, now at Richmond. Injured Lion Eric Hipwood is fourth with 16 goals and Charlie Cameron fifth with 15.

QClash Cleansweeps: Brisbane, 73-point winners in QClash #20 in Round 9 this year, will be chasing their third cleansweep on Saturday. They also won both games between the clubs in 2012 and 2013. The Suns swept 2015.

Blucher is a Consultant with Vivid Sport.